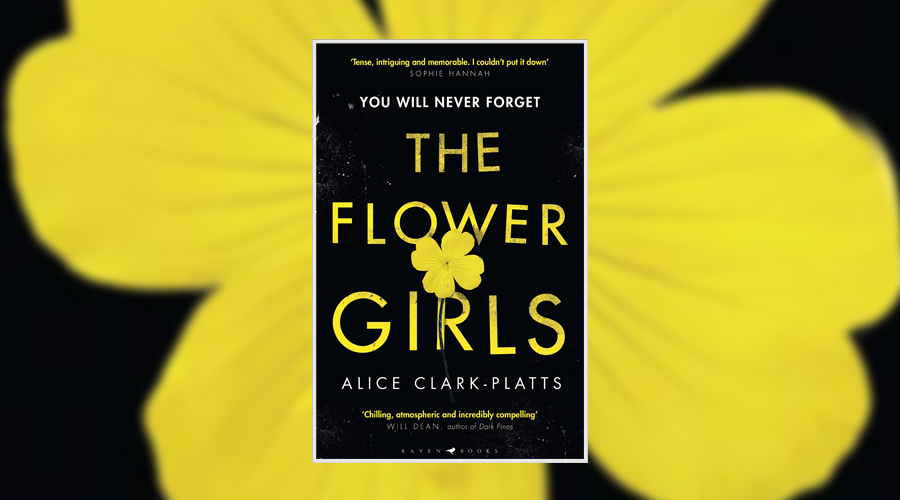 Alice Clark-Platts’ psychological thriller The Flower Girls is a dark and unsettling story that makes reference to some famous real life crimes of a similar nature.

The story revolves around the tragic events that unfolded in 1997 when Laurel and Primrose (Rosie) Bowman, aged 10 and 6, abducted and murdered 2-year-old Kirstie Swann. Laurel was found guilty and imprisoned but Rosie was too young to stand trial and, along with her parents, was given a new identity as Hazel Archer. Now, nineteen years later, a child goes missing at the hotel where Hazel is staying and when Hazel’s true identity is revealed, she is immediately considered a suspect. Meanwhile, Laurel is fighting for parole again after being continuously blocked by Kirstie’s family, who strongly believe that she should never be allowed to leave prison.

Alternating between the past and the present, we relive what happened on that dark day when Kirstie was murdered and experience the aftermath nineteen years later. Hazel has finally found happiness with her boyfriend Jonny and his daughter, Evie. However, she is still haunted by her past and even though she was never sent to prison, she has spent much of her life living in the shadows, too scared to get close to anyone in case they find out that she is one of ‘The Flower Girls’.

Laurel is nearly thirty and has been hardened by her time in prison. Through her scenes, Clark-Platts touches upon some sensitive topics, namely why a child would kill another child and whether or not criminals should be rehabilitated after committing such a serious crime. There’s lots of discussion in the media on whether or not Laurel should be released and given the chance to build a new life for herself. Does she deserve the right to a new identity and a new life after taking Kirstie’s away from her? And of course, the most damning question of all is whether she’d kill again. She was ten years old when she was imprisoned and at nearly thirty years old, has she changed at all or was she just born evil? This was something that I dwelled on throughout the story.

While Laurel is fighting for parole, the victim’s family wants to ensure she remains locked up. Kirstie’s family are determined not to let the public forget about this terrible crime and Clark-Platts explores the toll this takes on them and the heartbreaking possibility that Kirstie’s killer might be released.

Filled with many devastating and thought-provoking scenes, The Flower Girls is a shocking and unforgettable story that I couldn’t help comparing to similar real life cases. Clark-Platts brings in a lot of aspects I’d never considered before, shedding light on how both families are affected. The role that the media plays in the story – how they add fuel to the fire and easily sway public opinion – is also fascinating.

The abrupt ending leaves something to be desired, with a lot of unanswered questions. Nonetheless, I was impressed with Clark-Platts for tackling such a sensitive topic, raising all the right questions throughout. The Flower Girls is an extremely disturbing and sensitive story that will stay with you long after you’ve turned the last page.