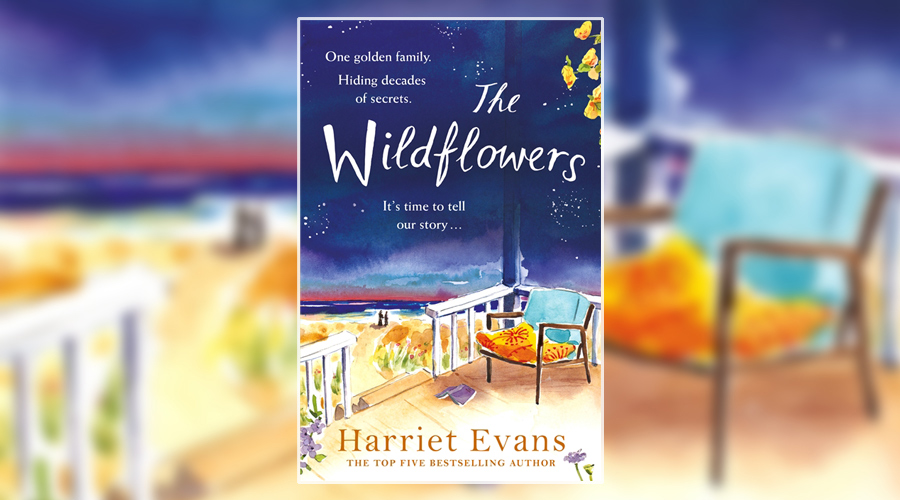 Harriet Evans’ eleventh novel might have been published at the beginning of Spring but it’s got Summer holiday read written all over it. From the emotional family drama spanning decades, to the delicious beachside setting in Dorset, The Wildflowers takes readers into the glamorous world of the Wilde family, where not everything is as golden as it seems on the outside.

Once a celebrated singer, Cordelia ‘Cord’ Wilde has become a shrunken shell of her former self. Her voice is ruined, she’s estranged from her family, and she’s shut herself off from the world. When she gets a call from her brother, Ben, telling her that their mother is dying, Cord is forced to face her family’s past and the terrible secrets that drove her away from them.

Going back to the summer of 1975, we meet the Wildes at their holiday residence in Dorset. Cord and Ben are innocent, slightly precocious children, overindulged by their famous, flamboyant thespian parents, Tony and Althea. From an outsider’s perspective, the Wildes have a dazzling, moneyed life, splitting their time between London and the West Country. Yet there’s a tension and resentment that simmers beneath Tony and Althea’s marriage, fuelled by endless adultery, Tony’s inflated ego and Althea’s increasing vanity.

It’s during that warm summer of ’75 that a lonely girl called Mads crashes into the Wildes’ lives and they welcome her into the family like one of their own. Seeking escape from her violent father, Mads uses a book of wildflowers to keep a diary of her observations of the Wildes through the years, noting the intricacies of their behaviours, personalities and activities. As the children become teenagers and then adults, the weight of secrets kept and words unspoken affects them all in different ways.

Though the story explores how Tony and Althea’s relationship shapes Cord, Ben and Mads, everything ultimately comes back to Tony and his deep-rooted trauma, which is the catalyst for his family falling apart. The story explores how growing up as a child during The Blitz and losing his parents to the war left him with abandonment issues. This chain of tragic events formed the man that Tony became and it’s only towards the end of the book that his children begin to understand why their father was the way he was; lost, broken and haunted.

“He grew up that night, entirely the wrong way, and he spent the rest of his life trying to atone for it, to make up for what he had done. He told no one about it so there was no one to tell him that he was not at fault, that he was a good person, deserving of happiness.”

Evans captures the different decades perfectly – from wartime to the ‘70s to the present day – and her descriptions of Dorset across the different periods gives the story a sweeping sense of time passing and a world changing. The Wildflowers explores some dark, sexual and, particularly towards the end, disturbing themes that give the novel a level of depth not often found in typical Summer reads. Counterbalancing the darker elements is the beauty of the coastal scenery and the charming atmosphere of life by the sea, when the days are bright, the nights are warm, and the sky is blanketed in stars.

Whilst a little on the long side, this is an engaging family saga to get swept away with, delivering drama, love, tragedy, poignancy, and the kind of theatrical air you’d expect from a story about actors. Reminiscent of Santa Montefiore with the emotional heart of Jojo Moyes, you’ll frequently find yourself uttering the words: just one more page.

The Wildflowers was published by Headline on 5 April 2018

Book Review: The Garden of Lost and Found by Harriet Evans