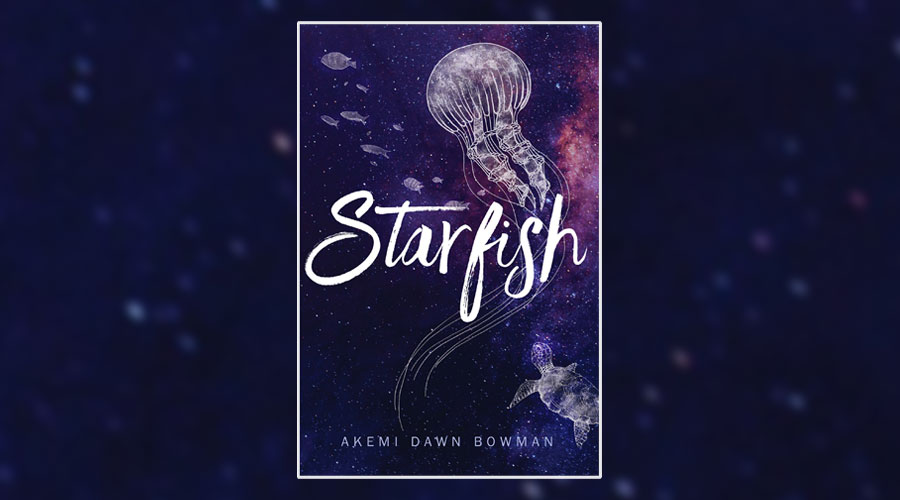 There is a lot about Akemi Dawn Bowman’s Starfish that makes it stand out on your typical YA contemporary shelf, not least because it’s an unfiltered, painfully honest look inside the mind of a teenager that will resonate with the insecure, anxious person in all of us.

Kiko Himura has always had a hard time saying what’s on her mind, and her social anxiety means that she finds new situations a struggle too. Between feeling like an outsider at her predominantly white high school thanks to the half-Japanese heritage she’s not quite in touch with and a fractured relationship with her family, mainly due to her overly-critical, completely horrible mother, Kiko is holding on to art school as her means of escape.

Only Kiko doesn’t get into the school of her dreams, Prism, and she’s faced with no plan B right at the moment her abusive uncle moves back in with her family. So, Kiko does what she’s never really done before and takes a risk, deciding to travel to California with a childhood friend to break free of her suffocating home life and re-evaluate her life plan. Despite her fear and anxiety, Kiko does her best to embrace the new opportunities presented to her on the west coast and just maybe learns a few things about herself in the process too.

“Looking out at the ocean, I don’t know how anyone could be anything but lonely. There’s nothing out there to see – just water and space. But it feels good. If lonely can ever be something good, this is it. This is Kiko at peace with the world.”

Starfishis a novel that’s ambitious in scope, tackling many issues that other authors would spend a whole novel honing in on. There’s emotional abuse, sexual abuse, mental health concerns and suicide, not to mention first loves, family drama and trying to figure out your own sense of self too. With so much going on, it’s inevitable that readers will find something that’s relatable within its pages, and praise this novel as something that’s much needed within the young adult reading community – but at times it does walk the line between being necessary and being too bleak, without always finding itself on the right side.

Kiko herself is the shining star of this story, becoming a completely-realised character with true-to-life problems and fears, as well as recognising when she’s heading in a bad direction – like becoming too reliant on James, her childhood friend and love interest, who appears to suffer from a touch of White Knight Syndrome. In this respect, the first person narrative is both a blessing and a curse. It gives words to the very real, debilitating internal thoughts racing through Kiko’s mind (including a very effective recurring theme of Kiko sharing what she wants to say against what she actually says); but it also leaves the motivations of side characters unexplained, leaving James as a bit of a simplistic saviour-type, and Kiko’s mother as a hyper-realised self-obsessed, narcissistic monster.

Thankfully, this novel redeems itself in the artistically and emotionally nurturing relationship Kiko forms with an artist called Hiroshi in California, who encourages Kiko in her creativity and asks her the kind of questions that provoke strong reactions and realisations into the state of her relationships and home life. Through Hiroshi, Kiko begins to understand how families can work when the relationships are healthy, and begins to feel confident enough to explore the Asian part of her heritage that her mother’s behaviour has encouraged her to ignore for most of her life, both of which are topics that need exploring in literature for readers just as much as Kiko.

Starfish may take a while to get going then – it’s not until halfway through that Kiko learns she didn’t get into Prism, which is a plot point divulged in the novel’s blurb – but it tackles a lot of sensitive subjects in its relatively short page count.

While it’s true that it may be a bit too black-and-white in its telling – Kiko’s friends and supporters are a little too saintly, while her abusive mum in particular is almost a caricature of evil – it’s also representative of Kiko’s perspective as both a victim and a hero of her own story, and her growing understanding of her situation and her strength in looking out for herself to overcome it is an arc worth making time for.

Starfish was published by Ink Road on 5 April 2018