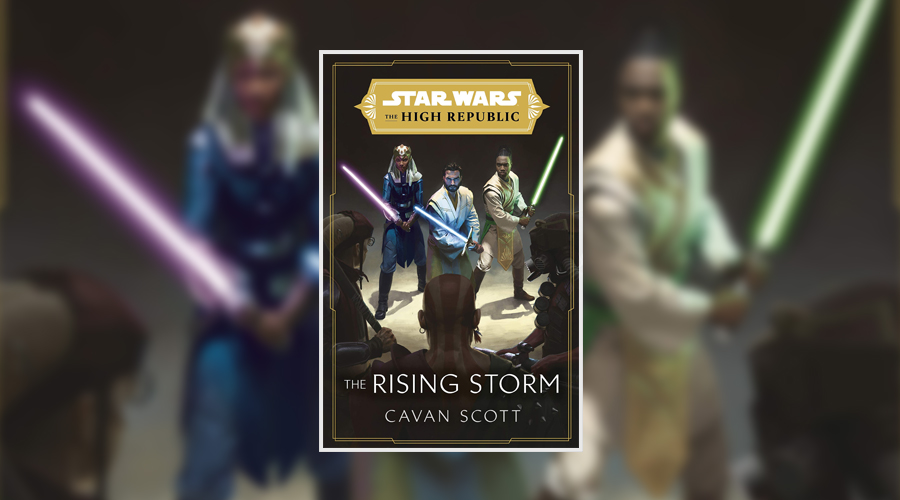 The Rising Storm – the triumphant, exciting and more grounded sequel to Light of the Jedi – picks up nearly a year later and focuses on the events leading up to and during Chancellor Lina Soh’s Republic Fair. The celebration of all that the Republic has achieved brings together beings from across the galaxy, and proves too tempting a target for the chaos-loving Nihil.

The second book in the High Republic trilogy, The Rising Storm feels like a more tightly woven story than the first. By taking a snapshot of time and extracting key events, it brings the reader into the action even more. Where Light of the Jedi spans the breadth of the sprawling galaxy, much of the sequel takes place on and around Valo, the planet hosting the fair. There is an immediacy to the danger throughout much of this novel as a host of Jedi, Senators, civilians and Nihil battle it out. But, like Light of the Jedi, The Rising Storm retains a core thread of hope. The Jedi are hopeful beings who believe in the force and one another. No matter the odds, this hope is what propels them into heroic actions, inspiring others, and makes even the most dire situations seem like fights they can win.

Smartly, The Rising Storm has a slimmed down set of characters; though it’s still quite an expansive one, the story allows us to really dive into a few of the core Jedi we’ve been following, namely Bell Zettifer, Elzar Mann and Stellan Gios. In the lead up to and during the Nihil attack, we see the battles and daring rescues of these Jedi plus new addition Ty Yorrick, a for-hire force-wielder.

Each of the Jedi develops along their own path and this sequel novel serves them well by delving deeper into their personal emotional states and motivations. Bell struggles with the loss of his Master and friend, seeming to hold contradictions within himself about the Jedi Knight he is supposed to be and the Padawan he feels like. Elzar is haunted by his visions but determined to right his path and has the willingness to do anything to change the possible dark future. And Stellan, raised now to be a member of the Jedi High Council, has to look forward in his new role at the top of the Order, while also remembering his journey and what he can offer to those Jedi that now look to him for guidance.

Ty offers an interesting new perspective in this peak era of the Jedi. Though she wields a lightsaber, she is not of the Order and so her interaction with the force stands in contrast with the one-breath-one-collective sentiment that runs through the Jedi. As individual as they are, under the Order they are unified. Her more selfish approach conflicts with the Jedi way but their mission does sway her a little to their way of thinking. She’s a survivor and, as we’ve seen, the Jedi do not always survive.

The Rising Storm’s villains, the Nihil, Marchion Ro and Lourna Dee in particular, have a less predictable role in this installment. As with the Jedi, spending more time with them solo serves to round out their characterisations and reveals layers and twists that make the arc of this trilogy even more intriguing. Those lost during the climax of Light of the Jedi were a necessary trimming of the fat that lets us enjoy the meat of these duplicitous and manipulative foes.

The High Republic series is fast becoming one of the best new additions to the Star Wars Universe, that is canon anyway, and this trilogy mirrors the wonder and thrill of the movies while also offering a fresh perspective. It’s wonderful to see the Jedi at their best, and still finding worthy enemies beyond the Sith.