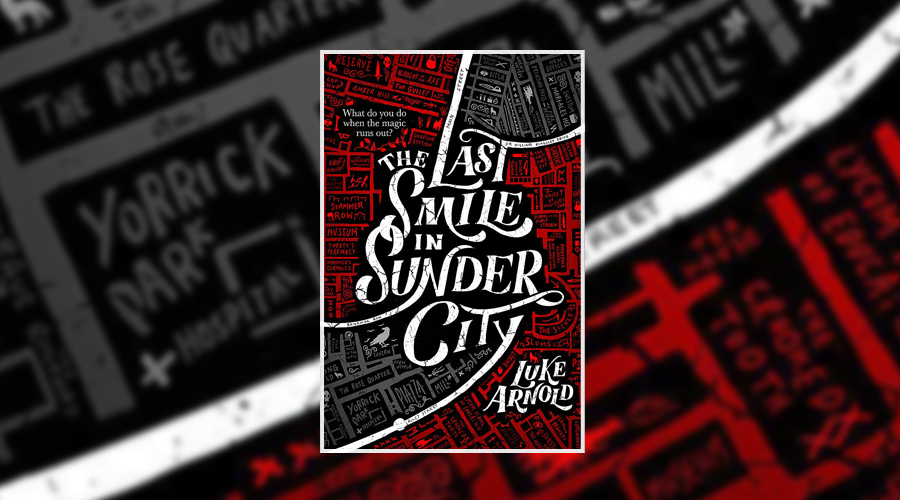 The Last Smile in Sunder City is an ironically magical mystery tale set in an industrial city trying to survive after magic gets taken from the world. “Man for Hire” Fetch Phillips is a grizzled, dejected human trying to do some good in a world that has lost its colour. Magic used to be abundant, then all of a sudden it was gone and it made Elves age centuries in moments and dragons fall from the sky. When the principal of a new school for young creatures of every race, except humans, enlists Fetch to find a missing teacher, he is led on a path with much bigger consequences for his life and the lives of those in Sunder City.

This is the debut novel from Luke Arnold, and one that has the potential to be an enrapturing and ever-growing series. Arnold plays both sides in his world building. In flashbacks, he offers glimpses of a vibrant and beautiful land full of magical creatures, showing the ways in which magic seeps into the evolution of everything from architecture to mechanics. Then he takes you into the grim, dusty, broken places that are left over when they become amputated of their magic. Every description of a half transformed werewolf or toothless vampire is nightmarish but laden with sympathy from our narrator, Fetch. He tries not to turn away from the darkness brought on by the lack of light.

Arnold’s lead character is one of those cinematic, wise-cracking, down on his luck detective types. He’s kinder in his head than in his actions, though his inner monologue does love a touch of the dramatic. He observes woman like a noir investigator, thinking things like ‘She was just the kind of woman that belonged on a stage: bursting with passion but with just enough body to contain it.’ His observations are certainly a bit old school but they don’t cross over into creepy – a relief when it comes to this kind of character.

Every new character and creature that’s introduced feels grounded in this strange reality. From Eileen, the human librarian turned bar-keep, to Baxter, a non-binary demon working as museum curator. Arnold is equally brilliant with the wider continent he has created. While much of the story takes place in Sunder City, a sort of hillside mining city lacking in greenery, we also get a taste for more far reaching places like elven cities, dwarf villages, wizard protected towns and even human strongholds like Weatherly which showcase the darkest side of humanity.

One of the most fascinating aspects of The Last Smile in Sunder City is the way in which Arnold plays with mythology. In his world, magic isn’t simply a tool of magical creatures, it is part of their being and has a source within the planet. Because of this, we get to hear a number of legends of how different creatures came to be. Dragons made from lizards walking in the desert across magical pools, gargoyles accidently conjured after statues are made from burial mud, and vampires born from a dark wizard’s curse. These fables are so engaging that you could happily read more and more be recounted.

With a detective mystery at its heart and array of magical beings, this novel would appeal to urban fantasy, steampunk and even high fantasy fans. In many ways, the story feels like the reverse of Jim Butcher’s Harry Dresden (of The Dresden Files). Rather than an antihero wizard in a human world populated by magical creatures, Fetch is a human for hire in a magical world ruled by creatures. So if you’re a fan of the former, you’ll both enjoy this and get something different.

The Last Smile in Sunder City is a fast paced novel, one that you could easily plow through. Fetch might not be everyone’s cup of tea – he is a familiar type – but the fantasy setting lends a newness to his story that’s both fresh and exciting.

Jai Thep Review: A gem of a festival in Thailand