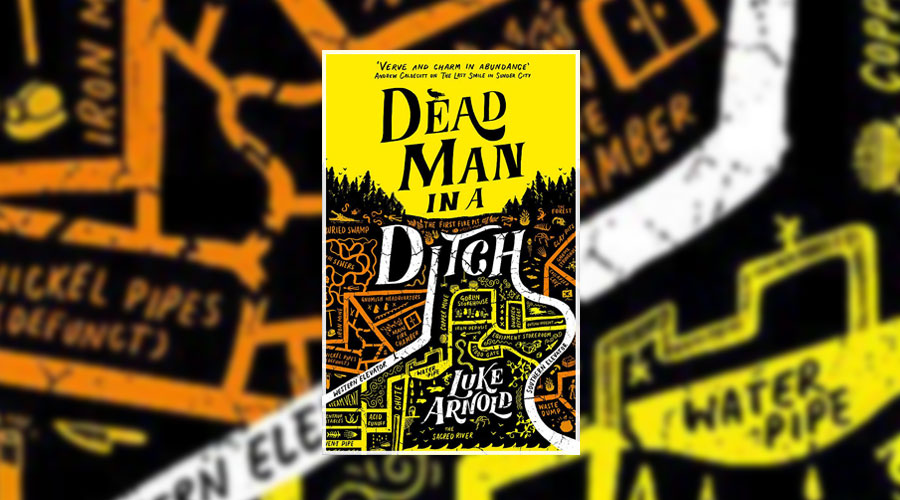 Dead Man in a Ditch is an addictive, thrilling foray through the messy, industrial city of Sunder. Luke Arnold’s sequel to The Last Smile in Sunder City continues the story of Fetch Phillips, a Man for Hire in a world of magical creatures that have lost their magic. Despite being akin to the grim detectives of spy mysteries, Fetch has enough humour and self-awareness to make this take feel like a unique adventure.

For this second outing, Fetch struggles even more to get by, taking any investigative jobs that come his way so he’s got enough money to bribe his way to finishing his mission. Barely recovered from his battle with a revamped vampire, he wanders into the darker parts of Sunder in search of answers, meets a cadre of new underworld creatures and even flirts with romance. In the background, the city seems on the precipice of a human industrial revolution, granting hope to the many struggling citizens. Yet, there is still an air of looming danger – and that’s not just because of the hidden figure with a cane who appears to be stalking Fetch. This could be the spark for a new age or a new war.

Once again Arnold is able to invest so much life and verve into a world that has ostensibly lost its connection to its magic source, The Sacred River. It allows for a more horrific, brutal view on werecats, warlocks and succubae. Humanity leeches the ephemeral nature of these beings, transforming them from beings of hope and light into twisted nightmares. You ever wonder what happens to a unicorn after its magic disappears? It doesn’t simply become a horse!

Building on what was established in Last Smile, Dead Man shows us more of what has become of humans now that they aren’t at a disadvantage. While magical beings continue to wrestle with how to bring their powers back or drown their sorrows thinking there is no hope, the humans have taken it upon themselves to move forward into their new future. Businesses moguls start to establish themselves in the city, allying themselves with the political bodies, and never taking no for an answer. It speaks to gentrification and colonialism, though these aren’t direct parallels, looking at how vulnerabilities in society are circumvented for the profits of a few.

One of the most fascinating aspects of Arnold’s world is the exploration of how each race of magical beings have been affected by the loss of magic. We’ve seen how were-creatures have changed, what happened to vampires and some fae. In this sequel, we dive deeper into those humanoid magic users like witches and wizards, as well as explore how the variety of faeries were each impacted by being cut off from their essence. It’s exciting to undertake the thought experiment of seeing how the more fantastical the creature is, the more damaging the impact, much like how a hippo can survive on land, but a whale can’t. Add magic and the evolution for these creatures survival can be warped in innumerable ways.

Dead Man in a Ditch is a great installment in the Fetch Phillips series. There are grander ideas at play than a case-of-the-week; it also manages to move Fetch’s overarching story forward in a very significant way. By the end of this novel you’re excited to see, not just what his next mystery or job might be, but where this series is going.