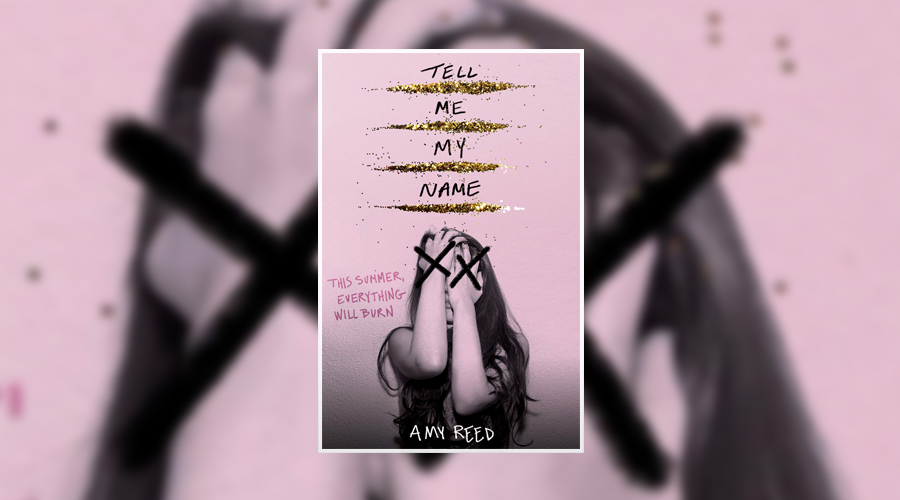 In a lot of ways, Amy Reed’s Tell Me My Name follows all the beats of a typical coming-of-age storyline. It centres on a girl, Fern, who’s on the cusp of adulthood, and whose life is changed irrevocably when she’s drawn into Ivy Avila’s orbit. It’s also a novel that paints a vision of a dark, dystopian future that’s rooted in our current reality – exploring climate change, rising capitalism and corporate domination in a world where wealth divides are stark and impregnable – and does all this while also offering itself up as a gender-flipped, feminist retelling of The Great Gatsby too. All of which is just to say: Tell Me My Name is a bold, hazy and dark novel, and certainly a reading experience to remember.

The novel takes place on Commodore Island, where 18-year-old Fern feels invisible as she watches the island’s wealthy residents and tourists come and go while she sits back and waits – for college, for summer, for her childhood best friend Ash to return her feelings, for life to begin. But then child star-turned-teen sensation Ivy Avila moves to the island and turns her attention onto Fern, and it feels like she finally has a purpose. The more time Ivy and Fern spend together, the more Fern unravels about the secrets that Ivy is hiding behind her fame, wealth, beauty and the lavish parties she throws at her new house, while Ivy turns to Fern when she wants someone that Fern can help her get.

But as the two grow closer and spend more time together, it’s not long before Fern’s safe and comfortable life on Commodore is left to unravel. As drought returns, fires rage on and protests turn ever-more violent, Fern and Ivy set out on a reckless path and things begin to spiral out of control, until everything that Fern thought she knew is twisted and bent into something new, and Fern can never go back to being the girl she was before.

“The sound of the party gets louder, and I feel something pulling at me, and I am simultaneously chasing it, some indescribable thing I want and I get the feeling that I am crossing over into a new reality, a new world, one that will change me forever. Even though I’ve never been here before, it feels somehow familiar. Like I was meant to be a part of it.”

It’s hard to stray too far from the publisher’s approved blurb in talking about this book, because a lot of what made Tell Me My Name such a unique, compelling story was the way in which it unfolded. If you have read or even seen Gatsby, you’ll recognise a lot of the plot points that the story works towards and you’ll be able to draw the parallels between characters too. There are also a lot of really great comparisons made to the novel’s original themes and updated for where we are now, 100 years on, with the same old debates of new money vs old money and what constitutes the American Dream playing out in new and interesting ways throughout.

What you won’t be able to predict is the sinister tone that lingers throughout the novel, or the way in which the disjointed and fragmented storytelling leaves you confused and second-guessing yourself, even as it draws you in further and you try to puzzle out Fern’s world and what’s going on in her head. And, for the most part, it’s a really effective move on Reed’s part. Even when the characters are hugely unlikeable, when they’re making terrible decisions and when they keep hurting themselves and each other, it’s the storytelling that pushes you to read further. It helps too that Reed’s writing is poetic in nature. In among all the weirdness and jarring nature of Fern’s thoughts and the imagined conversations that play out alongside real interactions, there’s always a nugget of something beautiful to be found within the narrative, or something that gives you pause and makes you think.

But there’s no getting around the fact that Tell Me My Name is an intense read, and will no doubt be remembered as a very divisive one too. This book has been compared to the likes of Speak and We Were Liars but, while they’re fitting comparisons to make, Reed’s latest novel is also a book in a category of its own, and it’s definitely a book that defies easy categorisation. It’s described as a psychological thriller, but it reads more like a suspense novel, with many mysteries to unpick and many social issues to explore too. It’s also dark and incessant, and living in Fern’s head over the course of these 300 pages is a very unsettling place to be, where you’re never sure of what’s real or who’s on whose side.

This is a story that’s at once beautiful and terrible, haunting and thrilling – but it’s also one that feels necessary, with a lot to say about important topics, including addiction, mental health and trauma, and how young women in particular are treated, and how their bodies are commodified. As much as it has the potential to alienate readers, all in all, this a stunning novel that easily draws you in, and those who see it through are rewarded with a beautifully written story and a ‘shock’ ending that, looking back, should really come as no surprise at all. Tell Me My Name is confusing, a little muddled and harrowing, yes, but it’s also powerful, chilling and will linger in your thoughts for a long time after you finish the final page.