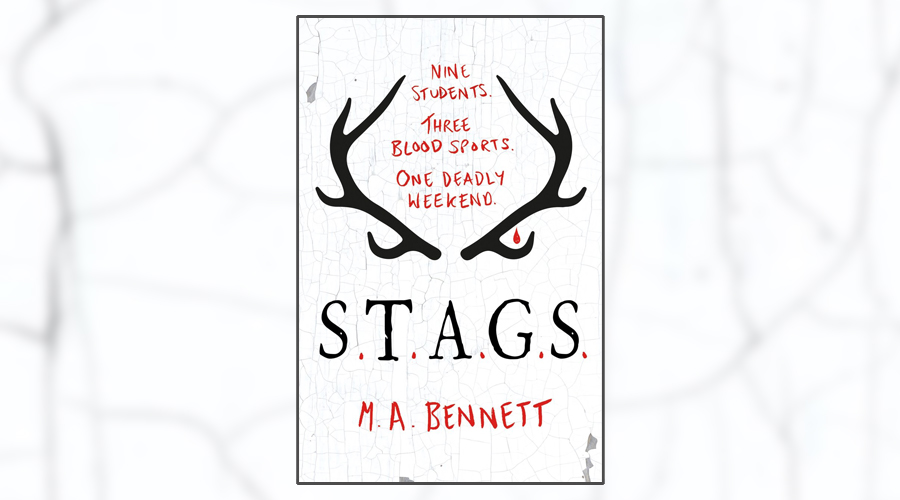 Book Review: A Stranger In The House by Shari Lapena

Archaic class systems and social hierarchy have been overarching themes to many a book, film and TV series, but rarely is it pushed to such fatal extremes as in M A Bennett’s debut novel. Featuring nine students, three blood sports and one deadly weekend, STAGS is a darkly compelling and twisted YA thriller that explores bullying, traditional upper-crust pastimes and cult-like societies.

Central to the story is teenager and scholarship student Greer MacDonald, who’s always struggled to fit in at her prestigious sixth form boarding school. St Aidan the Great, otherwise known as S.T.A.G.S, is an exclusive institution full of privileged, wealthy pupils that shun those who don’t conform to their upper class standards. Just as she resigns herself to the status of social exile, Greer receives a mysterious invitation to attend half-term weekend at the country manor residence of the most popular and moneyed boy at school, Henry de Warlencourt.

Henry and his five friends are known as the Medievals; they’re the unofficial prefects of the school – all tall, beautiful, intelligent and high on their own sense of power. Greer is initially surprised and then flattered to be not only noticed by them, but to be invited into their inner sanctum, and so she accepts the invitation to go huntin’ shootin’ fishin’. Along with two other carefully selected misfit students, Greer arrives at the ancient, sprawling Longcross Hall, where she realises that the only adults are Henry’s silent and obedient servants. What could possibly go wrong?

As the nine teenagers embark on three days of supposedly harmless blood sport fun, it becomes apparent that something more sinister is going on and the misfits are the real prey that the Medievals are hunting. Greer and her two accidental comrades, Chanel and Shafeen (selected because one’s new money and the other is Indian), have a choice to make: do they ignore the ludicrous yet obvious threat to their lives, or do they try to outwit their sadistic classmates.

“Henry de Warlencourt had listed Shafeen in the book as prey. He was of no more value than those pheasants. Henry had not just written his name down, but had entered him as a quantity. 1 x Shafeen Jadeja, as though there were thousands of him in the world. Pheasants and peasants, both expendable and worthless.”

It’s easy to see why STAGS has already been picked up for a major film deal; it plays out like a tame, incredibly British Battle Royale for a teen generation. It takes classroom bullying and turns it into an actual blood sport, one where entitled students attempt to pick off those they deem unworthy in a bid to, quite literally, cull those who threaten their elitist world. Within this, Bennett questions young people’s obsession with technology and whether a balance between the old world (where mobile phones and the internet didn’t exist) and the new world (where everything’s so instant) can be found.

There are constant references to movies, which spoke to the film nerd in me, and Greer is a likeable lead to follow as she battles between wanting to be part of the Medievals and survive their savage behaviour. Even when she knows that she’s next on their hit list, she still yearns for their approval. It’s a perfect representation of how young adults look for endorsement from their peers to gain a sense of self-worth.

While the aristocratic setting and characterisation of the Medievals is spot on, particularly Bennett’s descriptions of their plum-in-the-mouth way of speaking, the actual plot verges on being a little too far-fetched. The blood sport action also feels too easily resolved, even though the conclusion is open ended; more of the huntin’ shootin’ fishin’ would have gone down a treat to really amp up the eerie atmosphere and make it feel like these characters might not make it out alive.

STAGS is a pacey and well-plotted young adult story that champions outsiders and questions out-dated viewpoints in a constantly evolving world. It makes for an entertaining standalone novel but a sequel wouldn’t be unwelcome.

Book Review: A Stranger In The House by Shari Lapena