Book Review: Something In The Water by Catherine Steadman 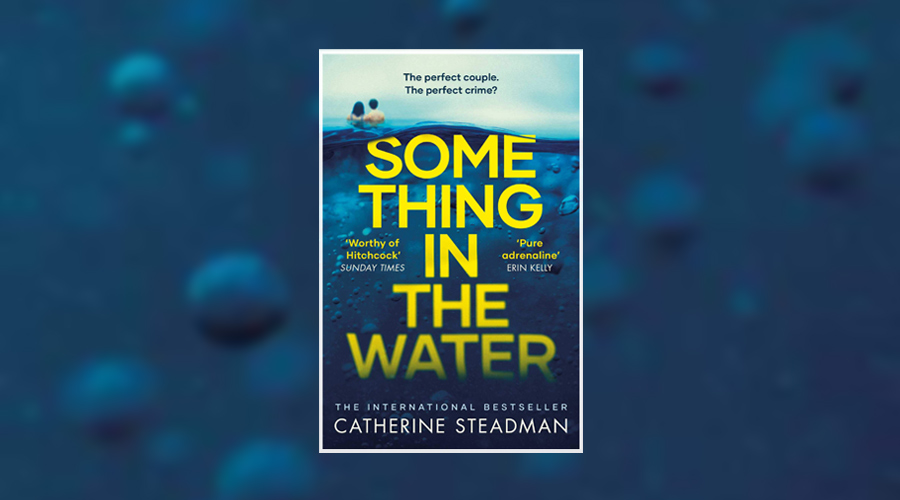 Catherine Steadman’s debut novel Something in the Water is pure soapy excess, telling a convoluted tale of greed, immorality and criminal cover-ups against a background of exotic locations and questionable decisions. It’s the kind of storyline that wouldn’t feel out of place on Dynasty – as beautiful people begin to do darker things in pursuit of wealth, security and saving their own skins. Yet if there’s one thing I can say with certainty about the novel it’s this: whatever story you were expecting from the synopsis, Something in the Water will surprise you – just maybe not for all the good reasons.

Documentary filmmaker Erin is engaged to handsome and successful investment banker Mark, and together they make the ‘perfect’ couple, about to embark on a dream honeymoon in the paradise of Bora Bora. Everything about their honeymoon is as perfect as they are, until one day after a storm Erin and Mark go scuba diving and stumble upon something in the water that means life as they know it will change forever. Deciding to keep what they found a secret, the couple soon find themselves in a situation beyond their control and as Erin and Mark head deeper into murky waters, it’s not long before they’re both left unsure of who to trust – and how to keep themselves out of trouble.

As far as hooks go, Something in the Water offers a promising one, but it’s the book’s actual opening that proves to be the real draw. The first time we meet Erin she’s busy digging a grave having already done the meticulous research into what’s involved and how best to achieve it. “Have you ever wondered how long it takes to dig a grave?” Erin asks us, in the novel’s first line. “Wonder no longer. It takes an age.” With reader interest well and truly piqued, the novel then invites us to judge whether or not Erin’s a bad person, jumping back to set up a three-month countdown until things go deadly wrong and detailing every move Erin made to get there.

The only trouble is, after the initial intrigue and suspense is established, the novel frustratingly fails to tap into any of that again for at least 100 pages. While an argument could be made for the need for world-building, of establishing Erin and Mark’s relationship in the weeks before their discovery so readers have something to compare to, when you’re building towards something explicitly teased on the book’s blurb, it ends up feeling more like wasted time: we know where we’re heading, so why can’t we get there sooner?

Thankfully, when we do get there, the book turns a corner into something altogether more exciting, even if only for the sheer ridiculousness of it all. Yes, the plot is absurd, unbelievable and requires a healthy dose of suspension of disbelief to get through as Erin and Mark manage to indulge in a life of subterfuge and deception through sheer luck and circumstance, but there are a lot of interesting questions at play too about relationships, trust and whether or not you truly know the person you’ve decided to spend the rest of your life with.

Something in the Water offers readers something of a mixed bag, then. As far as holiday reads go, you can’t go far wrong with Steadman’s novel; it offers escapism in spades and presents enough of a mystery in its opening chapter to drive readers through the book’s lulls. Erin, too, is an interesting narrator – she’s unreliable, doubts herself a lot and, considering she compares herself to Daisy Buchanan at one point in the novel too, aptly comes across as something of a ‘beautiful little fool’ too, but you can’t help rooting for her all the same, even knowing she’s going to end up burying a body or two. But this novel also has pacing issues, including a choppy narrative style that jars at times as well as a tendency to go off on a research tangent, or devoting too much time to contrived subplots that fall flat and only exist to give Erin a handy get-out clause later on.

If you give yourself over to the improbable plot lines and embrace it for all of its overblown twists and turns, you can have a lot of fun with Something in the Water when it gets going. A slow start aside, Steadman steadily builds a sense of suspense throughout as the novel shifts from criminal caper towards domestic thriller territory, making for an entertaining yet undemanding read to while away a few hours in the evening.