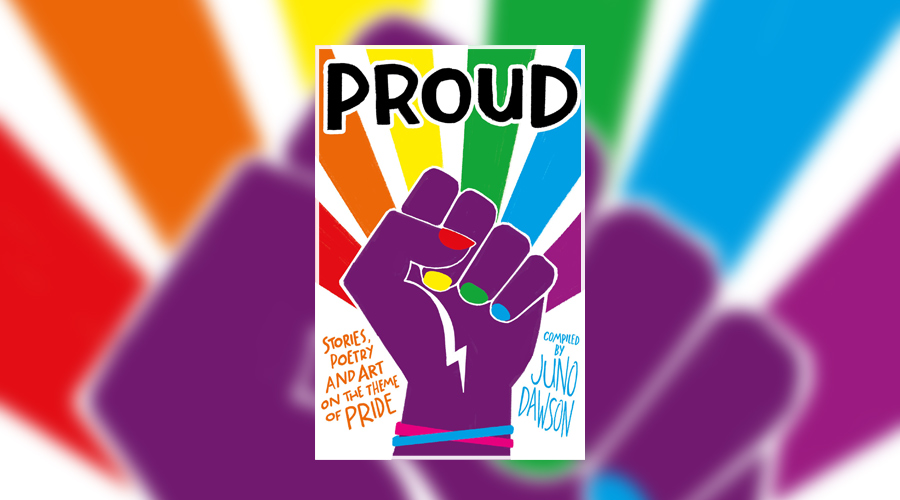 A Day on the Green: Red Hot Chili Peppers Review

Proud is an uplifting collection of short stories, poetry and art from LGBTQ+ authors. Every piece is wonderful and moving in a unique way, capturing the defiance of pride, when considered within the queer communities, without forgetting that it comes from fear, vulnerability and hope. Juno Dawson has compiled a wonderful range of writers and artists. You will effortlessly enjoy this book from cover to cover, as I did.

There’s a blend of narratives within this anthology, from fantastical stories to grounded YA tales. Genuinely, you will find something within every piece, which is paired with great artwork, so it’s difficult to pluck any individual ones out. Such is the diversity of pride and LGBTQ+ people. This, I believe, is what makes this a valuable read for queer and non-queer people, those binary and non-binary.

If you’re a nerd, a geek, someone who loves board games, fantasy novels or mythology, then you’ll love ‘The Phoenix’s Fault’ by Cynthia So and ‘The Courage of Dragons’ by Fox Benwell. In ‘The Phoenix’s Fault’, So tells the story of a young woman with a phoenix who is struggling to fulfill the expectations put upon her when it comes to marriage, and learns that one can lead and be the example for someone else. In Benwell’s ‘The Courage of Dragons’, D’n’D players use the courage of their characters to take a stand for non-binary students at their school. Kristen Van Dam’s art wonderfully captures the hero and those totems that they invoke for courage.

For the more romantic among us, there are stories of acceptance and love in ‘Penguins’ and ‘On The Run’. Alex Bertie’s sketched objects, such as a lottery ticket, coffee cup and peeled orange, pairs perfectly with Kay Staples story of Nic, who has run away with a partner and winning lottery ticket. Meanwhile, Simon James Green muses on the coming out fear that persists in the modern day in slightly different ways, through the lens of “gay penguins” at the zoo. ‘Penguins’ is funny, sweet and loving.

If there is one word that wraps itself around queer pride, it is community. LGBTQ+ community is not a reality for everyone and it doesn’t come in the same form for us all. For some, Pride parades don’t resonate at all, with others feeling it should be a protest, while more still want it to be a party. Where we find community might not be the same, but those groups, those safe and supportive spaces, are so important. We get to feel that sense of community in ‘Almost Certain’ by Tanya Byrne, ‘The Other Team’ by Michael Lee Richardson and ‘Love Poems To The City’ by Moïra Fowley-Doyle. Each is paired with wonderful art by Frank Duffy, David Roberts and Fatti Burke.

In ‘Almost Certain’, Byrne shows us a sixteen-year-old girl uncertain and searching for a way to be less so, which just so happens to be through music and a record shop. As a former Brighton resident, the locations that are called upon make it feel so much more real and poignant. Frank Duffy’s crouching figure meeting an outstretched hand with the backdrop of stars and sky for ‘Almost Certain’ is striking and moving in its iconography.

I also love the expressions that Roberts captures in his art for For ‘The Other Team’. Richardson’s story of a trans man and how a football team can be an imperfect but important support system for him is wonderful, with a colourful cast of characters shown in Robert’s drawing.

In ‘Love Poems To The City’, Fowley-Doyle takes us to Ireland as young queer people await the outcome of a referendum on marriage equality, considering how LGBTQ+ people can feel fighting within a system that others want to reject for being so biased against us. Fatti Burke’s artwork with a rose at its centre looks almost like a tarot card, taking a focal object from the text and showcasing it as the connecting tissue in the short story.

‘Dive Bar’ by Caroline Bird, ‘As The Philadelphia Queer Youth Choir Sings Katy Perry’s ‘Firework’’ by David Levithan, and ‘How To Come Out As Gay’ by Dean Atta punctuate the anthology, offering poetry as bookends and a sprawling set of voices that speak to our place in the world and as LGBTQ+ people. Leo Greenfield’s art for ‘How To Come Out As Gay’ is notably tender and heartwarming, the two figures embracing after Atta has conjured this comforting sense of ease and perspective.

If you love great storytelling then you’ll be happy to have picked up Proud. And since so many of these authors have already been published, there are many more new works to check out once you’ve finished. I know I will be.

Proud is published by Stripes Publishing on 7 March 2019

Skinny Lister – The Story Is… Review

A Day on the Green: Red Hot Chili Peppers Review