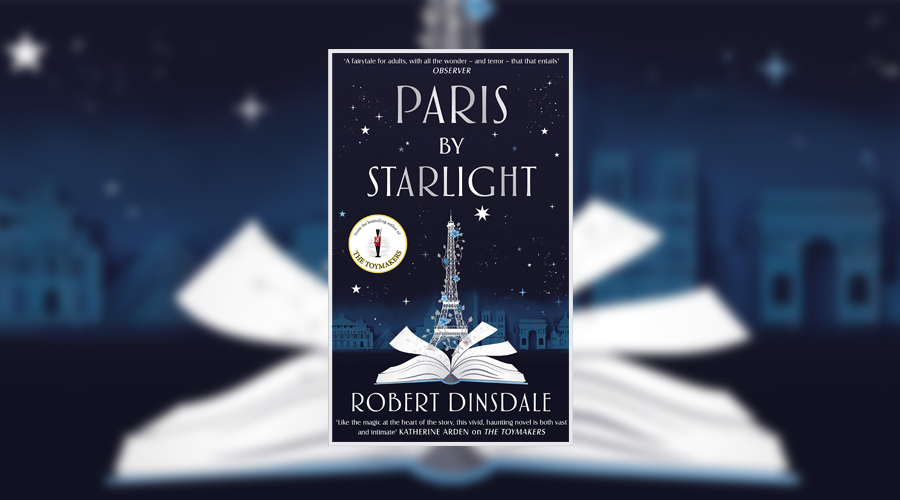 Having been thoroughly enchanted by Robert Dinsdale’s speculative fiction novel The Toymakers in 2018, I excitedly picked up his latest book, Paris by Starlight, to read over the rather unusual festive season we’ve just experienced. I was in need of a story full of magic and human connection – two things that were so lacking last year but felt more important than ever. I couldn’t have picked a better novel than this – a book so rich with dreamlike imagery and so full of genuine emotion that you want to savour every page as if it’s the first and last time you’ll ever read it.

Like The Toymakers, Paris By Starlight is a book that’s difficult to categorise and even more difficult to describe to anyone who hasn’t already read it. At the heart of the book is a love story between two people from different countries: Levon, a refugee who fled his troubled homeland with his family, and Isabelle, a young French harpist searching the city for the father who abandoned her as a child. Welcomed into Levon’s world, Isabelle is introduced to the ancient stories of his people, all of them held within the pages of The Nocturne – a special book full of fairytales and the heroic adventures of past generations of people who lived by starlight.

Isabelle is enchanted by these stories, but Levon is a young man who understands that his people can’t live in the past. In his eyes, they must adapt to the new world and the new city they find themselves in. When his beloved grandmother – who always insisted that they mustn’t forget the old ways – passes away, her death rouses a resurgence of magic that transforms Paris into a breathtaking spectacle. Suddenly nocturnal water dogs appear at people’s heels, night finches flitter through the skies, and ethereal flowers grow and glow from rooftops and cracks in the ground, coming alive in the light of the moon. This is the old magic and it is utterly bewitching. Even Levon has a change of heart, as he realises he must keep the tales and traditions going.

The citizens of Paris can’t explain the strange new phenomenon that’s taken over their city, and whilst there are those, like Isabelle, who embrace the light, there are also those who fear the unexplained. Distrustful and angered that their city is being changed from within, they form the Paris New Resistance to drive the strangers out of their city. It isn’t long before Paris becomes a fractured place, divided into those who live by day and those who live by night. As borderlines are drawn and outright war approaches, Isabelle and Levon find themselves reluctantly existing on opposite sides.

“On scattered rooftops, from here to the Seine and beyond: jungles of moonlight, iridescent gardens all drinking in the stars. Here and there are little columns of smoke; the vagrant peoples are stoking their rooftop cookfires tonight. From somewhere she hears singing in a language she does not understand – but music is universal, and music like this will linger in her head for days.”

Paris By Starlight is a perfect fusion of history, myth and romantic drama. Otherworldly, magical currents run through the story like the glowing vines that wind through Paris, running parallel to topical issues such as war, displacement, PTSD and the fear of ‘the other’. Dinsdale blends all these elements into a cohesive, compelling narrative that never feels exaggerated or too fanciful. And that’s the true wonder of his writing. Dinsdale makes the unbelievable feel believable. He’s a true storyteller, weaving extraordinary fairy stories and fables with everyday human struggles.

Enchanting, beautiful and heart-breakingly relevant – Paris by Starlight is the very definition of a book to lose yourself in. It does take a while to get going, and it doesn’t have quite the same character development that enriched its predecessor, but if you loved The Toymakers as I did, you’re guaranteed to find this just as captivating. And for those readers yet to discover Robert Dinsdale’s singular kind of fictional magic entirely, now is the perfect time to rectify that.