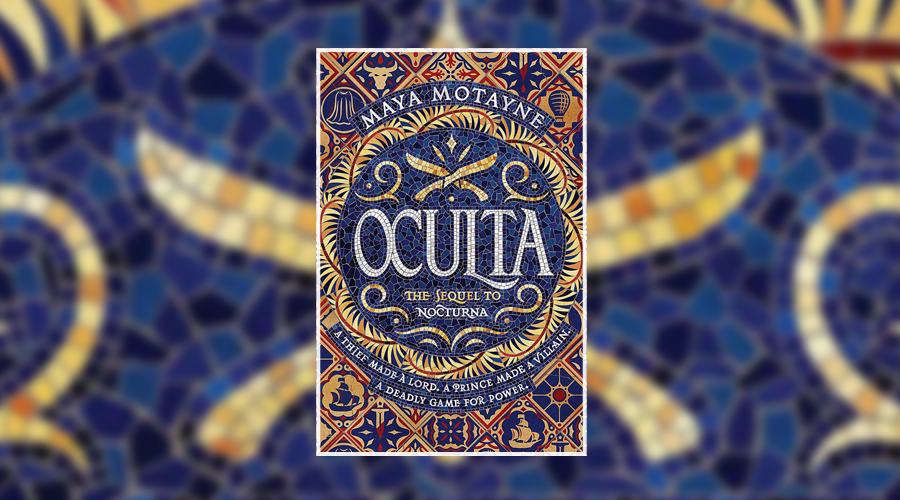 Maya Motayne introduced readers to a rich, magical new world with the release of her debut novel Nocturna in 2019. Brilliantly written, fast-paced and brimming with action and adventure, Nocturna is a great YA fantasy novel in every sense of the word and, as the first book in a new series, it held within its final pages the promise of more incredible things to come too. Two years on, the book’s sequel is finally here and it more than lives up to that promise.

From start to finish, Oculta is an exhilarating read, maintaining all of the magic, mystery and immersive detail of the first book all the while strengthening the series’ now-established world and delving deeper into the lives of the characters we know and love. If Nocturna was the introduction, then Oculta is proof that there is still so much more to explore – and, thankfully, it seems like Motayne is just getting started.

It’s been four months since the events of Nocturna and while Finn has been busing revelling in her newfound freedom from both Ignacio and San Cristobal, Prince Alfie has been taking on more responsibility as he begins to step up to his role as heir to the kingdom of Castallan. With an important International Peace Summit just days away, Alfie finds his plans derailed when the mysterious organisation associated with his brother’s assassination resurfaces. Before long, Finn is also targeted by Los Toros, but when she heads back to San Cristobal to warn Alfie, she learns that she’s been unexpectedly installed as one of the leaders of one of Castallan’s powerful crime syndicates.

With tensions in the capital rising and protestors speaking out against the peace talks between Castallan and Englass, Finn and Alfie cross paths again and find themselves working together once more. As they set out to track down the assassins, Finn and Alfie find their relationship tested as they end up in a race against time to eliminate the threat against the kingdom.

“He was just a boy, one she’d saved more times than she could count. He should be nervous to see her not the other way around. But then he was also a boy who’d looked at her with soft gold eyes and promised to die with her, promised that now, in this moment, she was more than she ever believed she could be.”

First and foremost, the one thing that needs to be said about both Oculta and the Forgery of Magic series in general is that the world-building is second to none. Nocturna created a magical new world that was brought to life by its sights and sounds and people, and Oculta picked up that gauntlet with ease, delving deeper into this world’s deep-rooted history and how it’s shaped its characters and their motivations in the present day. Once again, the prose is alive with brilliant, crystal-clear detail and it’s a wonderful celebration of the food, traditions and celebrations that make up this Latinx-inspired world, while the magic system at play remains unique, enjoyable and refreshing, while still offering up enough hints that there’s plenty more to discover too.

Even so, Nocturna ended on the kind of bittersweet note that didn’t necessarily scream for a sequel; there was the promise of more to come, yes, but the story could’ve ended quite happily at that point. While it can be confidently said that Oculta definitely doesn’t suffer from the dreaded Second Book Syndrome, it does end up in a bit of an odd position nonetheless. While the stakes are certainly high, they haven’t necessarily been raised from book one. Instead, it feels more like the threat has shifted sideways, with the tensions in Oculta playing out on a much more human scale, built on the contrasting politics of rival kingdoms and the lasting impact of systemic oppression and colonialism, rather than the ancient power and magical threat of the first book.

That’s not to say that the events of book one aren’t still felt throughout Oculta. Prince Alfie, in particular, feels the weight of his actions in Nocturna heavily, struggling with guilt over the deaths he had a hand in causing and the anger of the Castallanos who don’t see him as someone who could rule their kingdom. It has an impact on his magic, too, as he battles with his feelings of rejection and failure all the while fighting to do the right thing for his people. Finn, meanwhile, experiences a kind of PTSD from her own past and the events of book one, and it was heartening to see both Finn and Alfie lean on each other for support through these feelings, using the bond forged and nurtured throughout the book series so far to help each other wherever possible.

Once again, however, Oculta felt like it was more Alfie’s story than Finn’s, who remains a funny, strong, powerful character who just doesn’t get enough time to shine on her own merits. Even with her new position of Thief Lord, Finn finds herself working for others more often than not, using her newly-inherited network of thieves and spies to find out information that will help Alfie. It just so happens that it’s the same information that she needs if she wants to break free of her new role and return to the freedom she’s sought her whole life too. It’s a little too convenient, and I would have liked to see Finn involved in a storyline independent to the main narrative arc.

With Oculta, Maya Motayne has proven that the A Forgery of Magic series is a must-read for all YA fantasy fans. The book as a whole has a few small problems, including a few repetition issues and a big monologue from a character in the closing chapters to connect all the loose ends quickly before diving into the cliffhanger ending, but it’s clear that the stage has well and truly been set for a spectacular finale. Filled with magic, adventure and just a touch of romance too, Oculta remains every bit as immersive, exhilarating and intense as its predecessor, and this is one world that I can’t wait to return to time and time again.

Oculta was published by Hodder & Stoughton on 6 April 2021