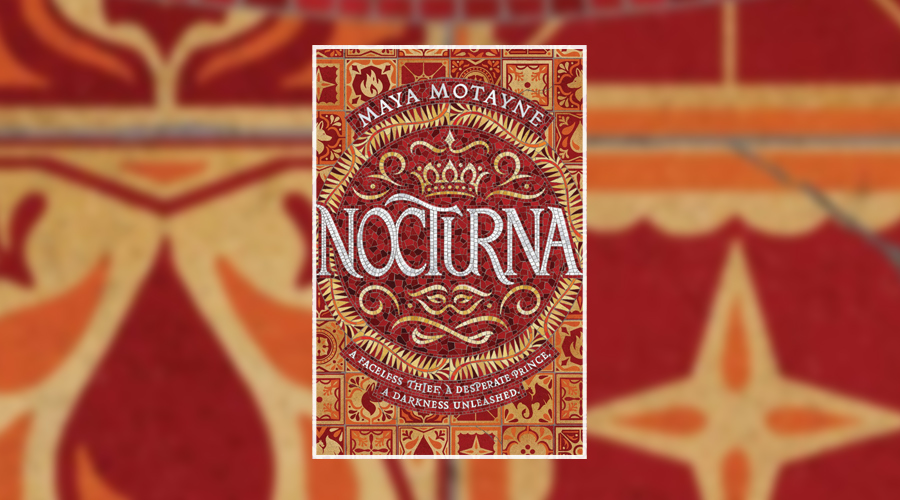 Good YA fantasy novels are defined by their magical, immersive worlds, their well-rounded and fully-realised characters and a great narrative arc that balances grand quests and character growth with ease. Great YA fantasy novels do all of that, and also deliver it in a beautifully-written package, diving headfirst into the action with such grace and detail that you believe you’re a part of that world too, until you race through the novel too quickly and the memory of what you’ve just read lingers long after you’ve finished the final page. Maya Motayne’s debut novel Nocturna is a great YA fantasy novel.

Sparked by the author’s desire to read something that reflected her own culture, Nocturna is set in a Latinx-inspired world in the kingdom of San Cristobal, where magic is everywhere and in everything. Finn Voy’s magic helps her survive. As a faceshifter, she wears new faces like cloaks, easily shrugging on new identities as she moves from place to place, thieving money, food and everything she needs to keep running from the life she left behind. For Prince Alfehr, magic is a lifeline. As first in line to the Castallan throne following the assassination of his older brother, Alfie feels unworthy to be king, so he would do anything to bring his much-loved brother back – even if it means using forbidden and dangerous magic.

When Finn and Alfie meet, they accidentally unlock a terrible, ancient power and unleash it on the kingdom – which, if left uncontained, could lead to Nocturna, a great darkness being cast over the world and dismantling all things good. With Alfie determined to protect his kingdom, he and Finn race to stop the evil power they unleashed, facing the darkness in their own pasts as they do so.

“Alfie swallowed thickly. He’d released the power of a god, a power dark enough to make dueños the world over come together to trap it … He would stop this thing from hurting anyone else, even if it cost him his life.”

From the very first page, Nocturna is a novel that invites you in and keeps you there. Not only is the magical world vividly brought to life through Motayne’s brilliant world-building, but the main characters are compelling and multi-layered with real motivations too, resulting in a book that is an absolute joy to get lost in. It’s a novel that straddles two worlds: Alfie’s privileged, luxurious world of the wealthy, as well as the darker side of the kingdom, as Finn lives in the slums, stealing to survive and running across mobsters and other seedy characters on a regular basis. But it also serves as a celebration of one people, and of a kingdom holding onto its own culture in the aftermath of colonialism.

It’s a legacy that weighs particularly heavy on Alfie, as the future leader of the country – and if I had one criticism to level at this novel, it’s that the weight of responsibility on Alfie’s shoulders pushes him into the driving seat of the narrative action. Finn, meanwhile, despite being as bold, independent and resourceful as any female protagonist worth her salt in YA, largely just tags along with Alfie’s plan, rather than forging her own path.

Nevertheless, Nocturna remains fast-paced and action-packed, and it delivers any number of exciting set pieces throughout its near-500 page word count, balancing epic, magical battles with clever plans of subterfuge while Finn and Alfie’s very complex relationship is developed naturally from rivals, to reluctant partners and, ultimately, friends – with plenty of snark, suspicion and stubbornness on both sides before we get to that point. Their relationship is a pleasure to see unfold as it forgoes the clichés of insta-love to focus on creating something much more real, which means the conversations the pair have and the secrets they share as they get to know each other feel genuine and well-earned.

Perfect for fans of Sabaa Tahir’s An Ember in the Ashes or VE Schwab’s A Darker Shade of Magic, Nocturna similarly delivers a richly-imagined world steeped in magic and adventure and it deserves to be embraced by fans of YA fantasy the world over. With two more books planned in the Forgery of Magic series, Nocturna serves as a fantastic introduction to something that promises to be very special.

Nocturna is published by Hodder & Stoughton on 2 May 2019