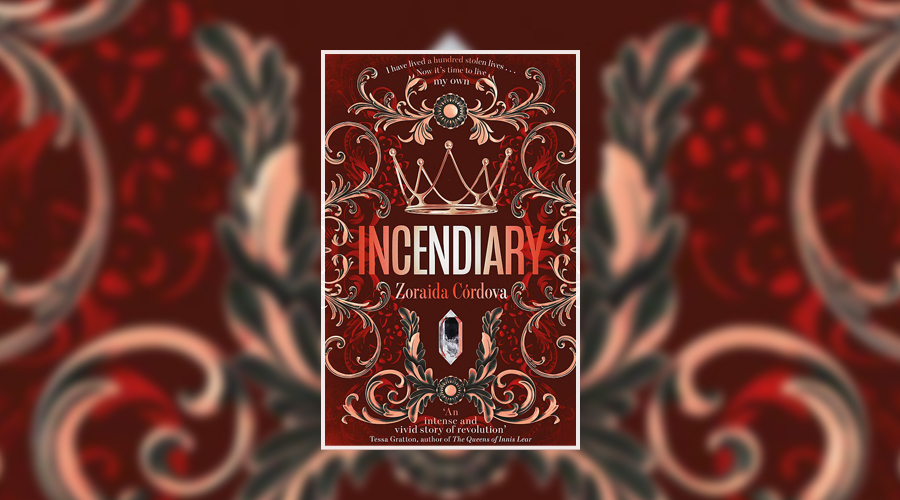 After a depressing reading slump at the beginning of lockdown, I’ve since been on a bit of a winning streak with five-star books. When that happens, there’s always a fear that the next book you pick up will be the one to break the positive run. Now if you’re reading this thinking that Zoraida Córdova’s Incendiary might be that book, think again. Because this is not just one of the best fantasy novels I’ve read over of the last couple of months, but of 2020 too.

Córdova’s epic and imaginative tale sees a memory thief going up against a monarchy hell-bent on the destruction of her people. Renata ‘Ren’ Convida is said memory thief, or more precisely a Robari – someone who can reach into other people’s minds and take away memories. It’s both a blessing and a curse for Ren, who was stolen from her family as a child and used by the crown to carry out the King’s Wrath, a siege that resulted in the deaths of thousands. Now Ren is one of the Whispers, a rebel spy unit working against the crown. Yet her past as a collaborator, however naive and unwitting she was, means she’s never truly accepted by her own people, even as she fights and struggles alongside them.

When Dez, her commander and the man she loves, is captured by the enemy, Ren sees an opportunity to not only get revenge but to prove her loyalty and end the war for good too. Ren must infiltrate the palace and complete the mission herself – even if it means yielding to the place and the men she hates most. Her life and the future of her people depend on the success of her secret mission but returning to the palace begins to unlock Ren’s own memories – memories that could hold the key to changing the fate of the entire kingdom if only she can unravel them in time.

If you’ve read the Brooklyn Brujas series, you’ll know that Zoraida Córdova can write a brilliantly dark and magical latinx urban fantasy book. Loosely inspired by the Spanish Inquisition in the 15th century, Incendiary is a more old-worldly, high-fantasy tale, which makes it even more atmospheric and absorbing. The intricate and intriguing magic system allows for plenty of clever machinations and twists within the story. Memories are stolen, minds are read, illusions are cast and people are persuaded to do things against their will, but it’s Ren’s internal battle – one between her head and her heart – that propels the story forward. Her gift is perhaps the most cruel and unfair because she can wield other people’s memories – from the most insignificant to the most important to absolutely every memory they have – but she has no control over her own.

“I didn’t know then that I couldn’t give the memories back. That I could steal one too many. That when I was finished – when I emptied people of all their memories – I was leaving behind only a shadow of a person. A Hollow.

When we first meet Ren she’s part of a team, with a mutual endgame that they’re all fighting towards. But Dez’s capture splinters the group, sending Ren on a solo undertaking that allows readers to really get to know the character. We fear what she fears and care about the things and people she cares about. This is most obvious with Dez, who we don’t spend much time with but who still feels like a pivotal part of the story nonetheless. It takes a great writer to get readers to love a character who only appears for a third of the book, and that’s exactly what Córdova does here.

Another character who really shines is the brutal and enigmatic Prince Castian, who’s painted as a monster but still inexplicably adored by those around him. Ren has such a passionate loathing for Castian and it leads to one hell of a curve-ball cliffhanger. If you’re going to write a fantasy series, this is exactly how you want to end book one – with readers aching to know what happens next.

This is my absolute favourite kind of fantasy book – one with captivating characters, fascinating worldbuilding and fast-paced, heart-in-your-mouth action. The only negative being that we now have to endure the long wait for Book 2. Le-sigh.

Incendiary was published by Hodder & Stoughton on 28 April 2020