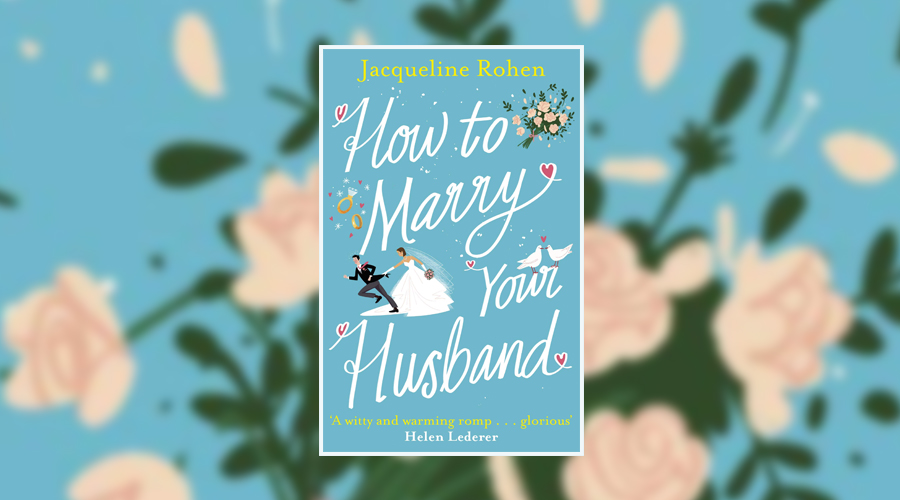 How to Marry Your Husband by Jacqueline Rohen is a warm and entertaining story about marriage, revenge and second chances – including whether or not they should be given in the first place. With a relatable lead and her justifiable anger driving the narrative forwards, the novel promises a lighthearted read that juggles the revenge-focused scheming of a betrayed wife and the pull of her lingering feelings for her husband to offer a refreshing take on your typical rom-com story. It soon becomes clear however that this is not strictly the story that How to Marry Your Husband is telling and so, for better or for worse, it doesn’t always live up to its early promise.

Rachel and her husband David have been happily married for 15 years when, on their anniversary, Rachel sees her husband kissing another woman and she knows their marriage is over. After getting in touch with a divorce lawyer, she then finds out that her romantic wedding on a Bali beach wasn’t exactly legal, and she and David were never even married in the first place. Heartbroken, angry and determined to make David pay, Rachel decides that she will divorce her husband after all – right after she makes him fall back in love and marry her (for real this time) again first.

With her new plan decided on, Rachel sets out to remind David why he fell in love with her in first place, but soon the memories of the early days of their relationship and the reminders of their life together have Rachel remembering all the reasons why she loved David too. Caught up in a tumult of emotions, will Rachel’s resolve to go through with her plan falter?

“Rachel couldn’t remember ever before experiencing such inner turmoil or feeling actual hatred. Because wasn’t that what this was? Hatred? It blackened not only her heart but also her every waking minute. She wanted David to suffer, she wanted him to feel incredible pain and indignity, and she wanted him to beg and beg for her forgiveness. Then, and only then, could Rachel leave him.”

Far from being a story of revenge-driven pranks and one-upmanship then, How to Marry Your Husband is more accurately described as being the story of a marriage in crisis as Rachel and David’s relationship hits a breaking point and the pair are both left to reconsider whether their life together is worth salvaging. Ultimately, this means that Rachel is more sad – and the novel more bittersweet – than perhaps was expected, especially as Rachel mourns her marriage and questions the last 15 years just as much as she desires to get even and rails against her husband’s poor decisions. The fact that the novel delves into David’s head with a few POV chapters of his own also murks up the romance waters, as he ends up coming across as an ungrateful and complacent man who’s hiding more secrets than even Rachel knows.

Nevertheless, although the novel often wades into more serious matters throughout its 350+ pages, there is a lot of fun and mirth here too – aided, in part, by that unanticipated dual POV. As Rachel turns into an amateur sleuth and interprets David’s actions one way, the next chapter revisits, deconstructs and re-explains the events from David’s perspective, contributing towards a comedy of errors that continues playing out to increasingly convoluted lengths. Rachel’s petty revenge schemes and vibrant best friend Eva also make for entertaining reading, and it’s the joy of waiting to see what they come up with next that keeps you turning the pages.

How to Marry Your Husband doesn’t always give you what you’re expecting, but that’s certainly not a bad thing. It’s telling, I think, that it takes nearly half the book before Rachel and Eva raise the possibility of executing the plan outlined on the blurb – that Rachel will fake falling in love with her husband again, only to divorce him when their marriage is official – and that’s because this novel is less about payback and more about second chances. What we’re left with is a sincere and loving story about relationships and mistakes which, while occasionally stilted and jarring in its transitions and structure, nonetheless provides plenty of laughs and lighthearted moments – not to mention cocktail recipes – too.