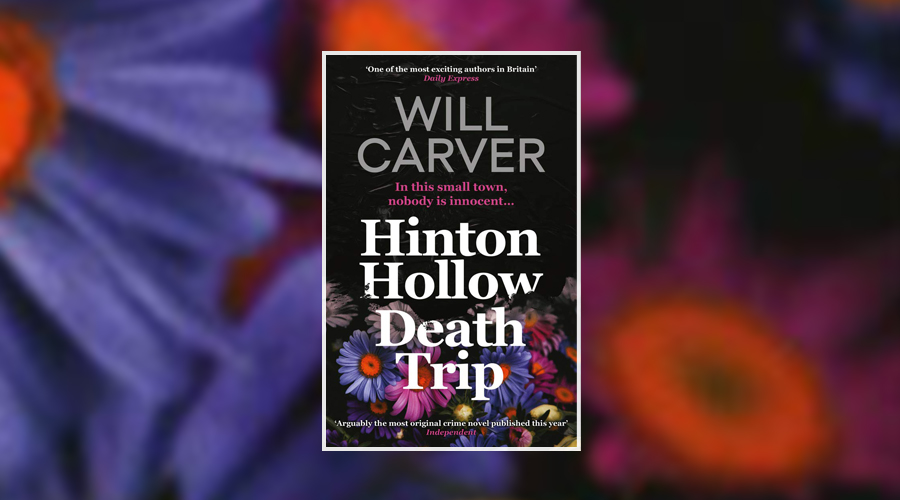 Just as Marcus Zusak’s The Book Thief is narrated by Death, Will Carver’s latest high-concept literary thriller is also narrated by an ancient, unseen and inevitable entity: that being Evil itself. Recounting five days in the history of a quintessential rural town, we play witness to the darkness that visits Hinton Hollow and how it infects the residents, seeping into the dormant furies and hairline fractures in their lives.

Hinton Hollow is a small town, population 5,120. It’s a quiet town. A nice town, by all accounts. That is until Evil pays a visit, and nothing from that point will ever be the same. A storm is blowing in and suddenly people who would never normally cheat are cheating. People who wouldn’t steal or lie are doing precisely that. And, worse still, someone has begun to kill. The victims are mothers and their children but the pattern is elusive to Detective Sergeant Pace, who has returned to his childhood hometown to escape the city. Pace himself is no stranger to Evil. He’s done and seen terrible things, and he will see plenty more terrible things over the course of five days in Hinton Hollow. It’s an irony that in trying to escape the darkness of his own past, he unwittingly brings it back home with him.

I might have begun this review with a comparison to The Book Thief, but a wise, all-knowing narrator is about the only thing these two books have in common. Seething in its commentary on contemporary society, Hinton Hollow Death Trip is a novel quite unlike any other. The story lays all our human faults and foibles bare, holding a mirror up to our world that’s less than complimentary. It’s unflinching and unforgiving, and if you don’t like what you see, well, that’s kind of the point. This is a story that demands you lift your head out of the sand and take a long, hard look at Evil – whether it masquerades as something material like junk food, something virtual like social media, or a basic human emotion such as lust or jealousy.

“Evil will always exist, but the better you are, the quieter I can be.”

Having the book narrated by Evil gives readers an outsider perspective of the characters. Our perception of them is always from a slight distance; we’re told what they feel and think by Evil but we never truly get to know any of them – even Pace, who is more of a shadowy outline of a man than a tangible person we can like or dislike. As readers, we want to empathise with and understand characters’ motivations, so the detachment created in this book shouldn’t work. And yet, strangely, it does. Carver allows us to assess his characters, whilst at the same time evaluating ourselves. Are they/we inherently good or bad? Can good people do evil things when given a nudge in the right, or wrong, direction? How could a seemingly doting wife cheat on her husband, or choose between her two children? Evil asks the questions and we have to answer them because, in the end, it’s on us.

Within the story there are many characters and stands, some interwoven and some completely unrelated, but they’ll all be brought together by Evil. Carver presents so much darkness that you’d be forgiven for losing all faith in humanity by the end of the novel, and yet there’s a sense that redemption isn’t completely lost. Evil doesn’t touch the children in this story – though of course they’re indirectly affected by the actions of the adults around them. Children have the capacity for innocence, goodness and blissful ignorance, and there’s a semblance of hope in that at least.

Hinton Hollow Death Trip is the third book in the Detective Sergeant Pace series but for anyone yet to discover the exceedingly dark and disturbing brilliance of Carver’s previous books, it can easily be read as a standalone too. The real brilliance of this book, however, is not in the sharp writing or the wry narrator or the thought-provoking social commentary – though they are all reasons to keep reading through the night. No, the real brilliance is in the killer reveal towards the end, which is snuck into the story so cleverly, and so by surprise, that I actually had to go back and read it again, and then read it a third time, just to be sure I had it right. You might feel a little less sure about the fate of humanity after reading Hinton Hollow Death Trip but one thing you’ll be certain of is just how good a writer Will Carver is. He should be on every crime reader’s radar.

Graphic Novel Review: When Stars Are Scattered by Victoria Jamieson and Omar Mohamed