It’s officially spooky season! Time to bring out the candles, cosy knitwear and pumpkins for carving. If you’re a book lover, it also means filling your reading pile with suitably strange and scary books to keep you up all night. From ghostly tales and eerie short stories to creepy thrillers and an entertaining supernatural comedy, here are 12 books to get you in the All Hallows’ Eve spirit.

For a unique take on vampire lore: Certain Dark Things by Silvia Moreno-Garcia 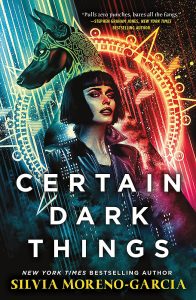 Originally released in 2016 but published for the first time in the UK this year, Certain Dark Things is a gritty, vibrant and brilliantly original neo-noir vampire tale set in Mexico City. It centres on a lonely garbage collecting street kid and a jaded vampire as they try to make it out of the city alive with a trail of corpses, cops and crime bosses close behind. Silva Moreno-Garcia is a chameleon of an author, able to move between genres like a shapeshifter changing form, and this unusual and brutal bloodsucker tale is further proof that her writing is truly one of a kind. (7 September, Jo Fletcher Books)

For a classic ghostly atmosphere: The Whistling by Rebecca Netley 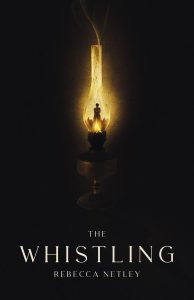 When Elspeth takes the position of nanny to a family on a remote Scottish island, she’s unnerved by the unwelcoming reception she receives. Her charge is a strange, secretive girl called Mary who hasn’t spoken a word since the sudden death of her twin, which happened just days after their former nanny disappeared. But nobody wants to talk about what happened, and nobody can explain the eerie sounds that come at night either. With winter closing in, Elspeth finds herself trapped on this wild island of secrets, ghosts and superstitions. If you love haunted house ghost tales that are as psychological as they are supernatural, then you’ll love Rebecca Netley’s atmospheric debut. (14 October, Michael Joseph)

For a book you can dip in and out of: When Things Get Dark – Edited by Ellen Datlow 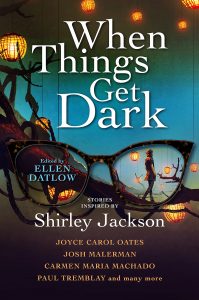 Taking inspiration from the inimitable Shirley Jackson, 18 authors craft their own tales of horror and mystery in this absorbing anthology. Perfect to dip in and out of as the nights draw in, the collection features short stories by the likes of Joyce Carol Oats, Josh Malerman, Cassandra Khaw, Jeffrey Ford and more. The anthology veers from eerie and chilling to poignant and peculiar as it pays homage to Jackson’s ability to weave haunting horror with emotive human tales. Special mention to Elizabeth Hand’s For Sale By Owner and Paul Tremblay’s The Party – which will leave you yearning for full length books. (21 September, Titan Books)

For readers obsessed with true crime and unexplained mysteries: The Hollows by Mark Edwards 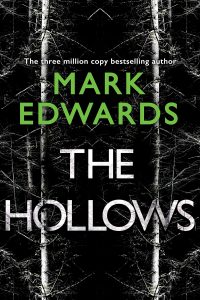 Monsters can come in all forms, as Mark Edwards’ The Hollows can attest to. With his life veering off course, journalist Tom decides to take his teenage daughter on vacation so that they can reconnect. From the moment they arrive at Hollow Falls, a cabin resort deep in the woods of Maine, something feels off. Then Tom meets two true crime podcasters who inform him of a gruesome history that saw the resort shut down after a murder. The crime was never solved and the woods are overrun with tourists marking the twenty-year anniversary. There’s something very wrong within Hollow Falls, and Tom and Frankie’s trip soon turns into a nightmare. There’s nothing eerier than dark, isolated woods and Edwards expertly utilises them here to create an uneasy atmosphere befitting Halloween. (8 July, Thomas & Mercer)

For witchy YA vibes: Precious Catastrophe by Deirdre Sullivan 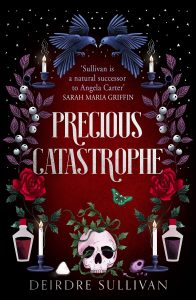 Deirdre Sullivan’s Perfectly Preventable Deaths was a delightfully macabre gothic fantasy tale of witchcraft, love, sisterhood and sacrifice. The sequel, Precious Catastrophe, takes readers back to the isolated village of Ballyfran, which acts as a magnet for people who are not quite human. Sisters Catlin and Madeline are trying to move on with their lives after the events of the first book, which saw Maddy give up a part of her soul to save her sister. But with Catlin still haunted by what happened to her and Maddy trying to master the ancient magics, it’s not long before they come up against another evil that’s haunting their hometown. This book – with its witchy vibes and supernatural sister protagonists – was made to be read during spooky season when the dark makes anything and everything seem possible. (30 September, Hot Key Books)

For darkly comical and deeply cynical thrills: The Beresford by Will Carver 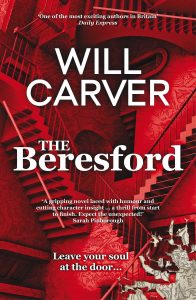 Will Carver’s books aren’t strictly horror but they often contain enough horrifying, gut-wrenching elements to categorise them as scary and twisted in their own unique way. Channelling sinister Hitchcock vibes, The Beresford is a standalone literary thriller about the tenants of a grand old apartment building where nothing ever changes, until the doorbell rings – something new occupant Blair Conroy is about to find out. Carver’s books are darkly comical and deeply disturbing and this one is no exception. It’s addictive from the opening chapter, which demands that you keep reading and reading and reading – before you know it, you’ll have reached the end and will be looking for your next Carver novel to devour. His upcoming book, Psychopaths Anonymous, promises to be just as unputdownable. (22 July, Orenda Books) 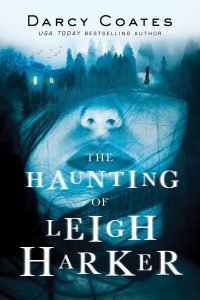 Leigh Harker keeps herself to herself. She’s lived in her beloved suburban home for over a decade and she has a quiet, routine life. She never felt unsafe in her house but things have changed. Suddenly her comforting home isn’t so comforting. At night, door handles rattle, footsteps echo through the house, the radio switches on and off, and a terrifying shadowy presence looms outside her bedroom door. Determined not to be driven from her own home, Leigh searches for answers but the truth isn’t something that’s easy to forget, and she might just wish she’d never sought it out in the first place. This is a classic haunted house novel that’s genuinely, palpably scary. Prior warning: You might want to read this in broad daylight. (7 October, Poisoned Pen Press)

For something a little less frightening but no less fun: Wish You Weren’t Here by Gabby Hutchinson Crouch 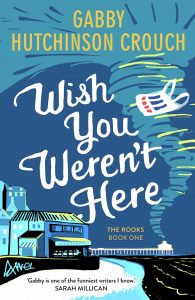 If you prefer your Halloween reads to be light-hearted and fun rather than keep you awake at night scary, then the first book in Gabby Hutchinson Crouch’s The Rooks series should be at the top of your spooky season reading list. Centered on a loveable family of ghost hunters who claim there’s no supernatural problem too big or small for them, Wish You Weren’t Here invites readers on a trip to an off-season seaside resort 20 miles from Skegness, where what should have been a quick call out to a church sets in motion events that could just signal the apocalypse. With a creepy setting, witty dialogue and wonderful, larger than life characters, this is an entertaining and funny book that never takes itself too seriously. (14 October, Farrago)

For horror movie aficionados: The Last Girl by Goldy Moldavsky 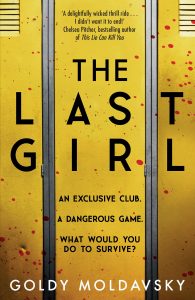 Rachel Chavez loves horror movies. Which is strange, because she experienced her own kind of horror when she was the victim of a house invasion that ended in tragedy. Now at a new school, Rachel wants a fresh start but some things never change and she still turns to horror movies for comfort. When she’s granted entry into the Mary Shelley Club, a secret student club that plays elaborate pranks inspired by urban legends and classic horror movies, Rachel’s past begins to catch with her again. The Last Girl is a love letter to the horror genre, with a side of Pretty Little Liars style mystery and teen drama to keep readers second-guessing. The book’s film and TV rights have already been sold, so don’t miss out on the chance to read the book before it hits the screen. (15 April, Electric Monkey)

For a touch of Daphne Du Maurier-esque gothic horror: The Whispering House by Elizabeth Brooks 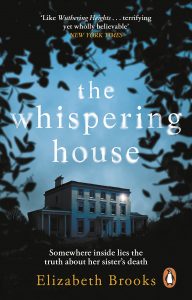 Dark, rambling houses are the epitome of gothic horror stories, which makes it the perfect backdrop for Elizabeth Brooks’ The Whispering House. The story follows Freya Lyell who, struggling to move on from her sister Stella’s suicide, visits the bewitching Byrne Hall, where she discovers a portrait of her sister. But why would there be a painting of Stella in a house that she’d supposedly never set foot in? Drawn to the mysterious manor house and its owners, charismatic artist Cory and his watchful mother, Freya’s fascination spills over into obsession as she tries to uncover her sister’s secrets. Inspired by Agatha Christie’s Devon residence Greenway, Brooks’ second novel is beautifully atmospheric and absorbing. (14 October, Black Swan) 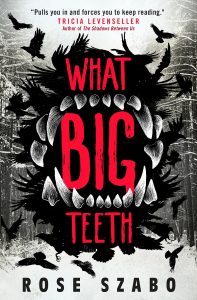 Eleanor Zarrin hasn’t had contact with her family since they sent her away to boarding school. She has vague and distant memories of them – recollections of fangs and fortunes, of strange hunting games in the woods. When she finally returns to her ancestral home in Maine, a sudden death rocks the family, prompting Eleanor to call upon her mysterious grandmother from across the sea. Whilst Grandmere might initially bring the bedlam under control, it’s not long before Eleanor’s odd family descends into a chaos of monstrous proportions once more – a monstrousness that lurks in Eleanor too. With magic, mystery and complicated family dynamics, What Big Teeth is the kind of book that once you start reading, you’re powerless to stop. (6 July, Titan Books)

For fans of Practical Magic – the movie and the book: Magic Lessons by Alice Hoffman 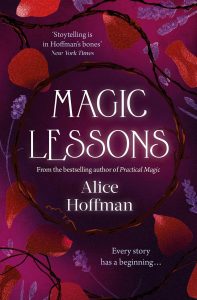 Fans of Alice Hoffman’s previous books, Practical Magic and The Rules of Magic, won’t want to miss this prequel, which goes all the way back to the 1600s and begins with a baby abandoned in a snowy English field. Under the care of gentle Hannah Owens, little Maria learns about the ‘Unnamed Arts’ and discovers she has a gift for them. But a gift as unique as Maria’s can also be a curse. Abandoned by the man she loves, she invokes a spell that will ricochet through the centuries and haunt subsequent generations of her family. For anyone yet to discover Hoffman’s books, Magic Lessons is the perfect place to start (before moving on to the aforementioned novels). And if you’re already caught up on everything that happens to the Owens siblings, going back to where it all started – and where it all started to go wrong, too – is an enchanting and emotional reading experience. (14 October, Scribner UK)