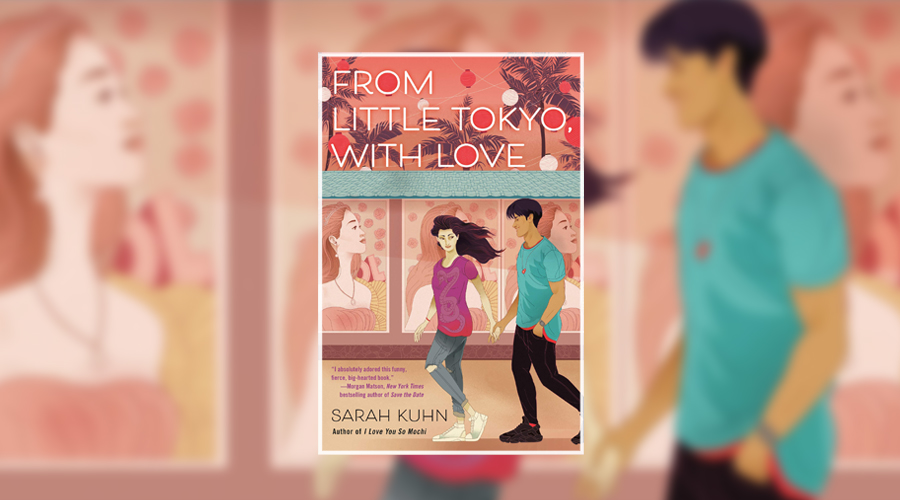 To say that life isn’t always a picture perfect storybook is a bit of an understatement, but Sarah Kuhn’s latest novel is a wonderful reminder that modern day fairytales do exist, even if they don’t always take the form that you’d expect. From Little Tokyo, With Love is a book with a whole lot of heart, exploring community, belonging, family and identity alongside its heartwarming romance plot. It also shines a light on a lot of issues that will ring true for so many readers too, making this a sweet read that has plenty to recommend it.

Seventeen-year-old Rika would be the first to tell you that her life is no fairytale, but Rika doesn’t want it to be – and between her amazing judo skills, her hot temper and her aversion to all things happily-ever-after, she doesn’t feel like she fits the princess mould anyway. All that changes during her community’s Nikkei Week Festival celebrations, however, when Rika locks eyes with America’s rom-com sweetheart Grace Kimura and is drawn into a quest of her own. With the help of Hollywood rising star Henry Chen, Rika sets out in search of clues that Grace is actually her mother, a woman she’d thought had died years ago, in the hopes of finding the one person that she can feel a true connection with.

But this is real life, so happy endings aren’t always guaranteed and Rika begins to fear that the more she opens herself up to hope and happiness, the more she’s only setting herself up for disappointment. Firm in the belief that girls like her don’t deserve a happy ending, Rika is left questioning whether she even wants to see her quest through. But as her search for Grace takes her on a journey around her magical hometown of Los Angeles and her connection with Henry deepens, Rika begins to feel more in tune with herself than ever before, and soon she even starts to feel that sense of belonging that she’s been missing all her life too.

“Something I don’t want to put a name to has taken up residence in my chest – a tiny light, a flutter of hope. A little fairy thing that’s about as far from the nure-onna’s vengeance-loving ways as you can get.”

With its fairytale premise and the series of implausible events that get the plot of this novel under way, it would be quite easy to dismiss From Little Tokyo, With Love as being nothing more than a wish-fulfilment teen rom-com. In the novel’s early chapters, there’s a lot of focus on fairytales, princesses and happily ever afters, and it has the unfortunate consequence of making this novel and these characters seem a lot younger than they’re supposed to be. The idea of teaming up with a cute, talented teen star who just so happens to have featured in a major film with your Hollywood star long-lost mother is also one that will challenge any reader’s plausibility threshold, and it’s a premise that’s outlandish enough to require a hearty dose of suspension of disbelief if you want to completely give yourself over to the story being told.

And yet, it is precisely those storybook elements – and the way in which they’re reshaped and reinterpreted – that make Sarah Kuhn’s latest novel such a charming read. The novel unfolds as a kind of fairytale in itself, where the rational, unromantic Rika’s telling of her own story evolves as she embarks on her quest for answers. The more she learns about herself and opens herself up to her growing relationship with Henry, the more Rika begins to reframe her own story and consider new perspectives. It’s through this device that readers are able to see Rika’s shifting feelings realised in a very enjoyable, very clever way, with Rika going from considering herself to be the “monster” in her own story, feeling like she doesn’t quite fit in at home nor in her Japanese community due to her quick temper and her biracial heritage, to opening herself up to being her own kind of princess and redefining what it means to have to her own fairytale ending.

What this novel does best, however, is that it makes sure that Rika never goes through any of this alone. While Rika frustratingly shuts herself away from her family and friends at first, Henry is right there with her on every step of her journey and, even better, he reevaluates his life and the different roles that he plays within it right alongside Rika too. Between the two of them, Rika and Henry explore any number of important issues, from mental health pressures and the stigma around them to the identity struggles that can come from being multiracial and the discrimination that members of the Asian community face in all aspects of life too. Together, they help each other cope with the pressures and expectations that they face in realistic and healthy ways, and both characters are emboldened to learn that they’re not alone in their experiences and their feelings – serving as another reminder of the power of Own Voices stories and the importance of being able to see yourself accurately represented in books and media of all kinds.

From Little Tokyo, With Love is by no means a perfect novel but, for the most part, it’s able to find a balance that works. A lot of the supporting characters may have lacked depth, for example, but you’re still given a clear sense of Rika’s complicated relationships with her family and friends. Similarly, Rika and Henry’s relationship was a little rushed in its development, with a final conflict that felt unnecessary and too easily resolved too, but it was also a joy to read, and was sweet, supportive and fizzing with chemistry from the very beginning.

Put those minor criticisms to one side and what you’re left with is a book that serves as a love letter to all those who feel like they don’t belong, giving a voice to so many people who feel ostracised or isolated and reiterating that everyone is deserving of a happy ending, whatever that looks like to you. This is a sweet and engaging story that has a lot of fun playing with fairytale tropes and characters, yes, but it’s ultimately a rom-com that’s grounded by a lot of real and important topics, making it a must-read for YA contemporary readers everywhere.

From Little Tokyo, With Love is published by Bantam Dell Publishing Group on 10 May 2021