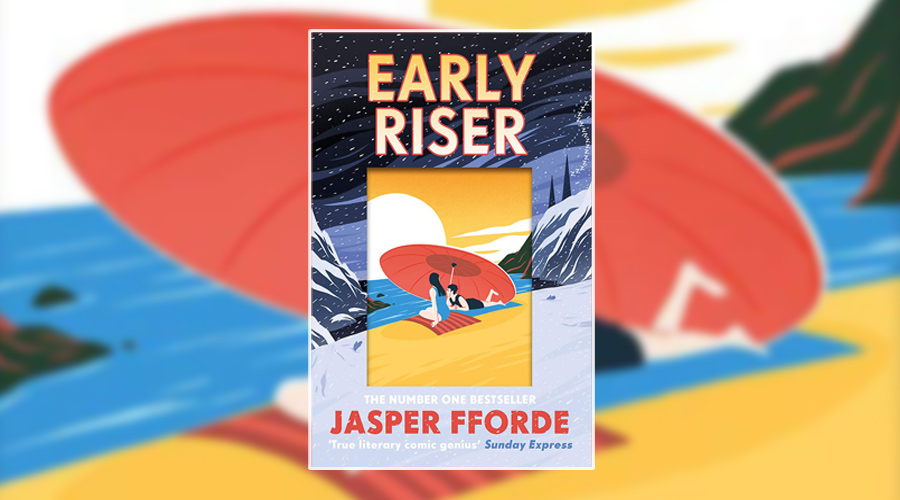 After a self-confessed creative hiatus between 2014-2016, Jasper Fforde returns to the literary scene with Early Riser – his fourteenth novel and the most eclectic and eccentric one yet. It begins on the cusp of Winter, in a complex, brutal and bizarre world where 99.9% of the human population goes into hibernation for the five coldest months of the year. Those asleep are protected by the Winter Consul, an elite force who act as the law until the cold season is over.

Charlie Worthing is one of life’s unfortunates, with no aspirations to join the Consul. That is until the infamous Jack Logan recruits him as his apprentice, having been impressed by Charlie’s rather brilliant memory. As they head to a remote region of Wales known as Sector Twelve, Logan warns Charlie of the horrors of Winter. It’s whilst investigating a possible viral dream that’s turning people mad, that Charlie’s mission takes a dark and complicated turn. Stranded in Sector Twelve, surrounded by zombie-like Nightwalkers and not sure who to trust, Charlie learns the hard way that there are no heroes or winners in Winter.

Early Riser is a multifaceted mix of sci-fi, fantasy, crime and satirical comedy. With so many duplicitous characters, thematic undercurrents and shady motives, it’s easy to get lost in the alternate reality as it pushes Charlie ever closer to becoming a victim of the very viral dream he’s investigating. There’s no other character you’d want to journey into this weird world with than Charlie. He’s a true underdog, underestimated by everyone and therefore the perfect person to look into the underhanded happenings in Sector Twelve. He starts off as a bit of a boy scout with scruples and good intentions. Yet sometimes doing the ‘right thing’ isn’t actually the right thing to do, and Charlie comes to realise this over the course of the book.

Fforde is a visual and vivid storyteller, describing everything in such detail that you instantly feel transported into the freezing and inhospitable Welsh landscape. This is a world where those who stay awake through Winter have to bulk up and build up their reserves, which means they’re constantly eating. If you’re anything like me, you’ll come away with a hankering for a Snickers bar or a crate load of Tunnocks Teacakes. However, that level of detail when applied to other aspects of the story – the perpetual viral dream that plagues Charlie, for example – are drawn out and repetitious. Just like a long British Winter, it sometimes feels like Early Riser will never end.

Fforde loads his story with smart, sardonic humour, which provides a constant tongue-in-cheek tone, even when the story takes more sinister turns. There are witticisms about cannibalism, death, sex, crime and class; Fforde can write a snarky quip or an amusing pun around pretty much anything. His use of language – which takes ordinary words and alters them to fit this Ffordian world – is sharp and inventive, and it makes Early Riser one of the most unusual novels you’ll come across this year.

“It’s weird, it’s rich, it’s set in Wales – and there are monsters, both real and imagined”, is how Fforde describes his novel, and that’s as good a nutshell as you’re likely to get. Early Riser will make you laugh, make you feel a little queasy, make your heart race, and make you root for Charlie’s underdog tale. Yes, it’s a little over-long but it’s still a weird, wacky tale you won’t forget in a hurry.

Early Riser was published by Hodder & Stoughton on 2 August 2018