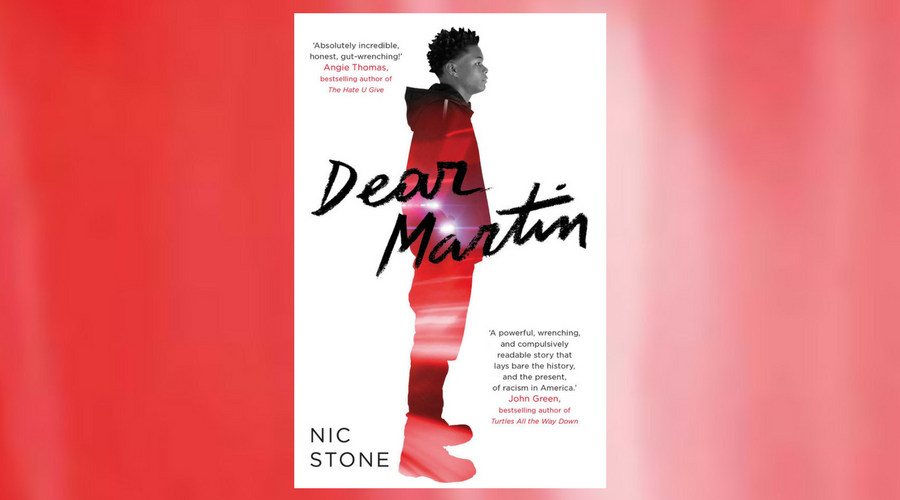 Frank, hard-hitting and powerful are just three words that come to mind when talking about Nic Stone’s debut, Dear Martin. It might be just 210 pages in length, but Stone makes every one of those pages count – shining a harsh spotlight on modern racism, prejudice and intolerance in America.

Black scholarship student Justyce McAllister goes to an elite private school in Atlanta. He’s top of his class, captain of the debate team and has a place at Yale in his sights. Yet Justyce is constantly reminded of the fact that he doesn’t entirely fit in. His white, middle class peers mask their ignorant discrimination with seemingly harmless jokes and throwaway comments, whilst his mother would rather Justyce died alone than fall for a girl who’s not black. He’s stuck in the middle of two cultures, pulled in both directions, without feeling like he fits into either.

The first time he has a run-in with the police, it’s because he was trying to stop his ex-girlfriend drinking and driving. All the police saw was a black male ‘manhandling’ a girl in the dark. The second time he encounters the police, he’s in a car with his best friend and shots are fired. In the tragic fallout, Justyce starts a journal to Martin Luther King Jr. in an attempt to understand why his skin colour still seems to matter and how he can rise above the racism that continues to plague contemporary America.

Jus is a good kid – he’s respectful to his elders, he tries to ignore his classmates’ blatantly prejudicial behaviour, and he works hard to give himself the best education so that he doesn’t end up in a gang, or worse, dead on the streets. However, the more he’s exposed to police brutality and the scorn of his classmates, the more he wonders whether being good and doing good actually makes a difference.

“You can’t change how other people think and act, but you’re in full control of you. When it comes down to it, the only question that matters is this: If nothing in the world ever changes, what type of man are you gonna be?”

‘What would Martin Luther King do?’ is a fascinating angle from which to explore what it means to be a young black man in America today. By looking at how King’s teachings hold up over half a century later, Stone confronts the country’s deeply embedded race problem head on, highlighting just how essential the Black Lives Matter movement is. Racism stems from ignorance and through Jus’ demoralising experiences, we see how educating children is one of the keys to ending it.

Racism, gang violence and police brutality are the main themes in this book but Stone’s story speaks to anyone who’s ever been discriminated against because of their skin colour, their religion, the clothes that they wear, or the music they listen to. It champions acceptance, tolerance, patience and kindness. Hopefully, in time, these qualities will win out over hate. In the meantime, books like Dear Martin are the ones we should be giving to young adults, because they’re the people who will help to change the world.

Dear Martin was published by Simon & Schuster on 3 May 2018