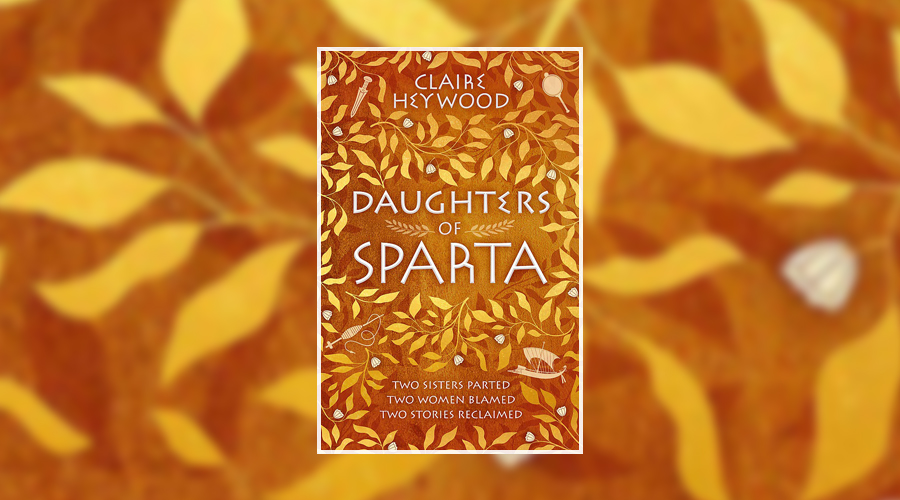 When I was a teenager, way back in the distant memory year of 2004, I fell in love with a little swords and sandals blockbuster known as Troy. You may have heard of it… Loosely based on Homer’s Iliad, Wolfgang Petersen’s historical epic told the story of the Trojan War and was one of the most expensive films produced at the time. I loved the drama, the tragedy, the ferocious combat between the Greeks and the Spartans. Rewatching it now, I’m struck by something my younger self wasn’t: that for a mythical war waged on the pretext of rescuing a princess who was seduced and stolen from her home, Troy was very much a movie about men. The women of the tale – Helen, Andromache, Briseis – are relegated to standing in the shadows of their powerful, proud and tempestuous husbands and masters as they embark on their fabled heroics. But if Claire Heywood’s debut novel, Daughters of Sparta, tells us anything, it’s that the shadows where these women historically reside are where the truly interesting and impassioned tales take place.

We’ve all heard the story of Helen of Troy, ‘the face that launched a thousand ships’, but so often her life is told through other characters’ viewpoints. Daughters of Sparta explores the Siege of Troy and the events leading up to it from Helen and her sister Klytemnestra’s perspectives, beginning with the characters as young, naive girls. As princesses of Sparta, the sisters have lived a life of luxury, security and privilege. But their beauty and royal standing comes at a price: their destinies are not their own. Stripped of the charm of their youth and married off to foreign kings, the sisters soon realise that their bodies and desires are not their own either. The individual burdens they face are different though: ‘Nestra’ must contend with the aggressive and domineering whims of the glory-seeking Agamemnon, whilst Helen struggles to connect with her less attentive husband, Menelaos, in the wake of a traumatic pregnancy that leaves her terrified of having more children.

It’s with the arrival of Paris, the charming and vain Prince of Troy, that everything changes. Seeking a love and passion she’s never experienced in her marriage, Helen makes a spontaneous and reckless decision that will send shockwaves not just through her timeline, but for thousands of years after. The ripple effects will also set Nestra on her own journey to break free from the marital chains that have shackled her for too long. As the years move on, these two women, who went from innocent princesses to world-wearied wives and mothers, who were threatened, belittled and humiliated, slowly begin to reclaim their futures and, in the process, their own stories too.

“She felt like an autumn leaf, plucked from its tree by the snatching wind and dropped into the racing river below. All she could do now was to stay afloat as that ceaseless current bore her towards her future.”

Set against the backdrop of a destructive and bloody war that used the women as scapegoats, Helen and Nestra’s dual story is one of secrets, love, loss and revenge. Claire Heywood’s retelling of the myth gives the sisters unique and convincing voices. As the eldest of the two, Nestra is the more responsible from an early age. She feels an obligation to look after her sister and set a good example, and she’s compliant in her father’s wishes because she wants to do what’s right for her family and for her people. Helen is younger and more impressionable. If you grow up being told you’re the greatest beauty in the world, it’s difficult not to fall into the trap of believing it. In Helen’s case, it also makes it difficult for her to believe someone might actually value her for anything other than her beautiful face. When she grows up and experiences something akin to what we now know to be post-natal depression, her whole world begins to crumble.

So much of Heywood’s story revolves around the place and responsibilities of women in ancient history, specifically the Late Bronze Age. Though Nestra and Helen are princesses, they’re treated as nothing more than vessels for procreating. Their sole duty is to provide their husbands with a succession of heirs to secure their reigns. It was rare in ancient times that women in prominent positions got any say in their marriage and that’s true of Helen and Nestra, who are both unsatisfied and unappreciated. Yet the sisters do get glimpses of happy marriages: they grew up in the security of their own parents’ love and respect for each other, and Helen later witnesses the genuine devotion between Hektor and Andromache. It shows them what love and marriage can be like, but that doesn’t mean they will ever have it themselves.

Even written from the perspectives of mythology’s most vilified women, it would be difficult to write about the Trojan War without encompassing the men – some great, others weak – who made it happen, wreaking havoc on the guilty and innocent alike. The worst traits of men are portrayed in Agamemnon’s single-minded desire for power and supremacy, as well as in Paris’ arrogance in promising Helen a new, better life and his cowardice in running away from the war that ensues as a consequence. However, Heywood does show the best of men too: Hektor’s bravery and loyalty to both his people and his family, and Menelaos’ consideration and ability to forgive – in every way the antithesis of his bloodthirsty brother. When the Siege of Troy came to a head, I felt genuinely devastated by the chaos, violence and loss of life. Like Nestra and Helen’s destinies, such an end felt inevitable, as if it were set in stone from the very beginning. Yet it doesn’t make it any easier to absorb.

If you love epic books about Greek mythology and the often misunderstood or misinterpreted women within these tales, Daughters of Sparta should be right at the top of your reading list. It’s a vividly written and compelling retelling that brings the Spartan princesses to life with all the human fortitude and foibles you’d expect from flesh and blood people. I’m already impatiently awaiting the reveal of the next set of female perspectives from the ancient world that Claire Heywood will be writing about in her second novel.