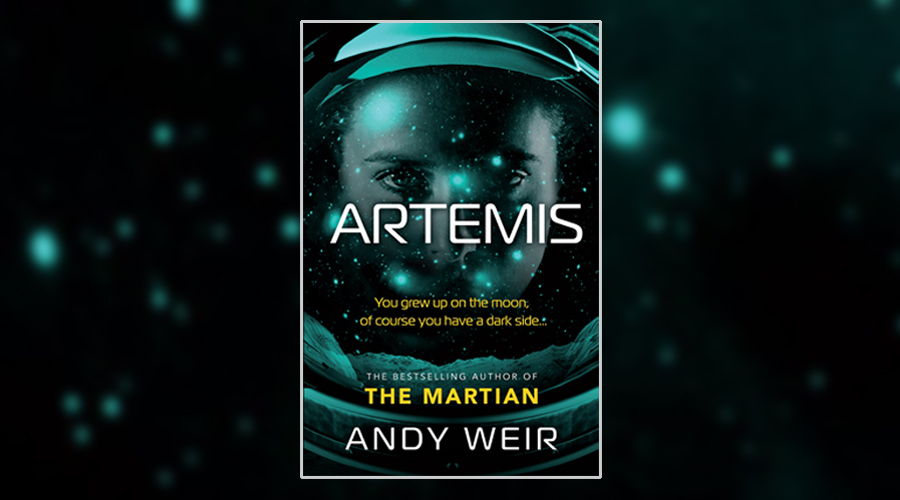 Andy Weir’s debut novel, The Martian, was an absolute triumph. Released in 2011, it was both a Sunday Times and New York Times bestseller, before being adapted for the big screen by movie juggernaut Ridley Scott. Suffice to say, fans of Weir’s particular brand of witty, smart and high-concept storytelling were a tad excited about the release of his latest novel, Artemis.

Second books are a difficult beast but Weir has written yet another clever and action-fuelled story packed with the author’s trademark wry humour and fast-paced science. Refreshingly, Artemis centres on a female character – the crafty, belligerent and whip-smart Jazz Bashara, a porter (glorified delivery girl) by occupation and criminal smuggler on the side. Jazz lives on Artemis, the first and only city on the moon, with a population of 2000. It’s home to extravagant billionaires and rich visiting tourists, with poorer workers who keep the city running smoothly and profitably.

Jazz is one of those workers; her wage barely covers her rent and she yearns for an apartment that’s bigger than a coffin and has its own bathroom. When she’s offered a lucrative opportunity by an eccentric Norwegian businessman, it’s too sweet a deal to turn down. Jazz puts aside her reservations and gets to work masterminding the perfect crime. All she has to do is sneak out of the city, traverse the moon’s surface and sabotage some rovers – what could possibly go wrong? When billionaires, Brazilian mafia, law enforcers, scientists and politicians are involved, the answer is pretty much everything.

Weir throws readers straight into the action, introducing the advanced world of Artemis within the opening chapters and then diving head first into the lunar heist. Jazz is instantly likeable, her sassy and bolshie attitude having the simultaneous ability to rub people up the wrong way and charm them. She’s full of self-assured overconfidence but she’s also young and impulsive, and naturally her criminal plan goes awry very early on. With a vicious assassin on her tail and very few places to hide (it is the moon after all), Jazz assembles a team of her most trusted allies – Ocean’s Eleven style.

“On a scale from one to ‘invade Russia in winter,’ how stupid is this plan?”

Artemis plays out like a classic heist movie but it has one unique element that sets it apart from other tales of its ilk: the space setting. Everything feels more dangerous and risky when you could run out of oxygen, spring a chemical leak or accidentally blow up the structure from under you. It also allows for some brilliant action scenes featuring zero gravity fights and humorous techy dialogue. Weir’s informal and light-hearted approach makes the book a breeze to read and he realises that the reader might not grasp all the scientific chatter thrown back and forth between characters.

The focus is very much on the action and adventure but that doesn’t mean the characters get short changed. There are plenty of heart-warming interactions between Jazz and her Arabic father, whose Muslim faith doesn’t align with his daughter’s unorthodox behaviour. Then there’s Jazz’s Ukrainian friend Svoboda, whose awkwardness towards women highlights Jazz’s own failings with the opposite sex (though she probably wouldn’t admit she had any). Just like The Martian’s Mark Watney, Jazz and her pals are the brainy yet down-to-earth sort you’d like to hang out and have a beer with.

Artemis is pure entertainment – a fun and adventurous book brimming with wit, intelligence and ingenuity. If you like novels that are smart with snarky protagonists, you’ll find plenty to enjoy here.

Artemis was published by Del Rey on 14 November 2017