If you’re a fan of horror and dark fantasy fiction, chances are you’ve read – or at least heard of – Bram Stoker Award-winning author Paul Tremblay. His mind-bendy blend of psychological chills and supernatural scares unnerved even horror veteran Stephen King, who, in his own words, is “pretty hard to scare”. So if King – who’s written countless horror stories – found Tremblay’s novel scary, I – a lover of horror, but a bit of a jumpy wimp – was going to find it flat out terrifying. Sure enough, I did – to the extent that I limited my reading A Head Full of Ghosts to daylight hours only, because everyone knows monsters come out to play at night.

The feeling of unease is established right from the start. A slightly detached young woman called Meredith revisits her childhood home in New England, accompanied by best-selling author Rachel Neville, who’s writing a book on the infamous, potentially supernatural happenings that took place in the house fifteen years previously. As Rachel documents this never heard before first-hand account, Meredith, or Merry as we later come to call her, recalls her painful, disjointed memories and the horrifying events that destroyed her normal, suburban family.

We’re taken back to when Merry was eight years old. She’s an energetic and over imaginative child, in awe of her older sister, Marjorie, who she would do absolutely anything for. But fourteen-year-old Marjorie is changing and the innocent stories she used to make up with her sister have become darker and alarmingly disturbing. At first her parents put it down to sulky teenage behaviour, the standard rebellious performance of a young girl growing up. However, they soon realise that something is seriously wrong with their daughter when Marjorie begins to display signs of acute schizophrenia. Is she really mentally ill though, or is there something more sinister, something demonic, inhabiting her body?

Marjorie’s upsetting behaviour turns her once stable home into a house of horrors. Merry watches as the sister she adores dissolves into a shell of her former self; she sees her mother descend into depression and her father look for answers from God. Eventually, unable to help Marjorie with medicine and psychology, the Barrett family turn to the local Catholic priest, who suggests an exorcism. Not long after, a production company descends on the Barrett house and the family become the unwitting stars of a reality show called The Possession, which will document their plight, culminating in the exorcism.

“There are some parts of this that I remember in great, terrible detail, so much so I fear getting lost in the labyrinth of memory. There are other parts of this that remain as unclear and unknowable as someone else’s mind, and I fear that in my head I’ve likely conflated and compressed timelines and events.”

We see the events unfold from Merry’s perspective, first as an impressionable child, frightened by her sister’s erratic behaviour and confused by her parents crumbling relationship, and then as an adult looking back, still not entirely sure of all the details. Grown up Merry also writes anonymous posts on her ‘The Last Final Girl’ blog, dissecting the reality show and examining the ordeal from a pop-culture aficionado’s perspective. She studies the episodes, scene by scene, comparing them to equivalent horror films and stories, all in a bid to understand what was real and what was conjured up by the production company to produce good television.

What makes A Head Full of Ghosts so terrifying is that it’s never clear whether Marjorie is actually under the influence of something evil. She displays all the classic signs of demonic possession; we know this because we’ve been there, done that, bought the t-shirt – we’ve watched all the movies Merry talks about in her blog and the signals are all there. Strip away the religious aspect though, and it could be nothing more than a serious mental illness – a theory that’s bolstered by Marjorie seemingly confiding in her sister that she’s merely pretending so that her parents can benefit from the money the TV show makes. This eventually evolves into Marjorie making a very compelling case that it’s actually her father who’s possessed and she’s trying to show the world that he’s the real danger, not her. 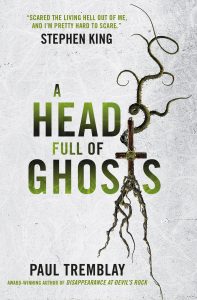 This combination of psychological and supernatural makes the story all the more intense, and the actual moments of true horror seem so much worse because we don’t fully understand what’s causing them (Marjorie marathon vomiting onto the dinner table has surely put me off eating spaghetti for a while). The fact that it’s all told from an eight-year-old’s viewpoint makes it less reliable too, because Merry can’t properly comprehend what she was seeing. When her parents talk of an exorcism, she doesn’t know what it means or entails, so the reader is always at the same disadvantage as Merry. We watch from the periphery, making The Last Final Girl blog posts imperative in deciphering the horror and tragedy captured on camera.

Tremblay is a pro at conjuring disturbing visions that seep off the page and crawl under your skin. He knows when to be subtle and when to go full horror, using cultural references to root his story in the real world. A Head Full of Ghosts is bloodcurdling and spine chilling, a book that I simultaneously wanted to keep reading and hide away in a dark drawer. It’s an absolute must-read for anyone who loves horror with a psychological edge.

A Head Full Of Ghosts was published by Titan Books on 27 September 2016.