In 2002, Rosamund Pike starred as the femme fatale in Brosnan’s last James Bond movie, Die Another Day. As a journalist for The Times, Marie Colvin was recovering from a grenade blast that obliterated the sight in her left eye in 2001. Who would expect that sixteen years later, Pike would be playing the journalist after her untimely death in Homs, Syria, in 2012. A Private War tells that story, beginning in 2001, and tracking her career until that fateful day. A sober approach to the brutal reality of writing in war-torn countries, A Private War is a shocking true story that reveals how heavy the cost is on the writers themselves.

In 2001, Colvin was in Sri Lanka meeting the Tamil Tigers and was struck by an explosive. Adopting an eye-patch from that point forward, Colvin would laugh, with martini in one hand and sucking a cigarette in the other, and joke about her pirate look when home in London. But it was never enough to stop her from covering these important news stories. Heading to Iraq, she built a relationship with Paul Conroy (Jamie Dornan), a freelance photographer who would work with her until his final day. She would take cover when soldiers would shoot and flash a “London Health” gym card, claiming she’s a nurse, to sneak past dangerous guards to get to her story. And her stories were big, including the discovery of a mass grave where up to six hundred bodies were buried. In Libya she was granted access to interview Gaddafi – and had to shake off his affections. Finally, she positioned herself illegally in Syria, and refused to leave a decimated make-shift hospital where men, mothers and children were murdered by their own government. It was the worst conflict she had ever experienced in her years as a foreign correspondent and it, ultimately, led to her death. 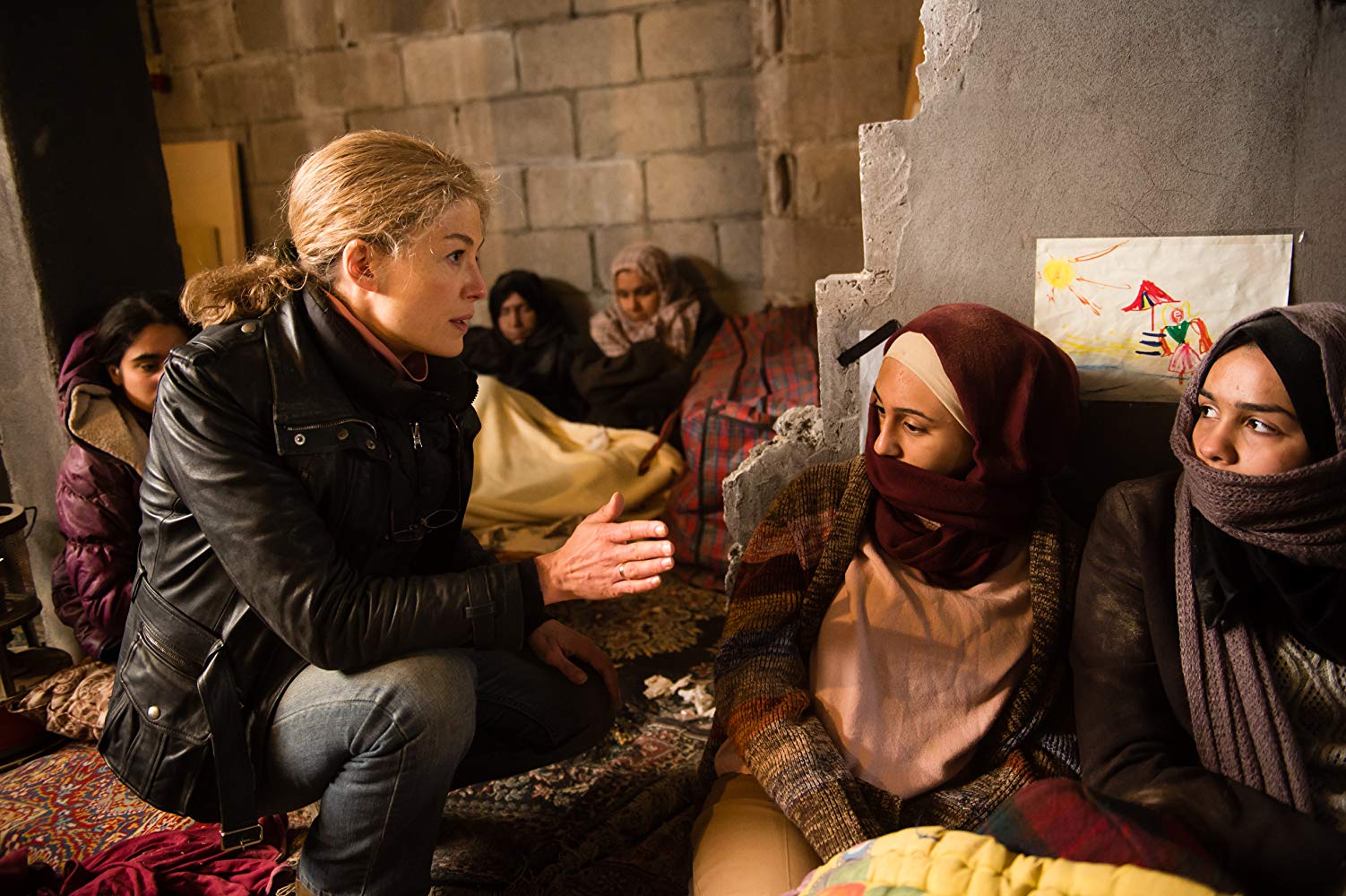 A Private War rests on the shoulders of Rosamund Pike. In a complex and multi-layered role, Pike portrays Colvin as a ruthless reporter, with a no-bullshit attitude to go to the places few would go and challenge her superiors without consequence. Her perspective, as narrated at the very start, is that “fear comes later”. In equal measure we see a conflicted soul: A woman who struggles to make sense of her reasoning and uses alcohol to dull the nightmares that plague her during her sleep. Her ex-husband talks of Bosnian soldiers who posed with decapitated heads, haunting his dreams: “they looked very happy with themselves” he says. In support, Jamie Dornan, as her photographer Paul, is supportive and grounded, while Tom Holland as her editor is simultaneously in awe of her brave and fearless approach to writing and frustrated as to whether she will make the deadline (though, she always does). But Marie Colvin is a scene-stealer in herself, stealing the limelight at a party and ballsy enough to reduce her surrounding journalists to size. She knows what she wants and she will ensure that she gets it.

As a plot, we veer from London located romances with Stanley Tucci to the dusty war zones and bombed-out buildings of Iraq, Afghanistan and Syria. It can be unsettling to be pulled back and forth between these two disparate worlds but it is a necessary uncomfortable balance. The human story that Colvin witnesses, when printed in ink on paper, is crucial for change. “It’s like writing your own obituary”, she says, when talking in an interview about why she does what she does. Akin to The Hurt Locker, there is something tragic and deeply humbling about someone who refuses to be safe for the sake of a greater good. She talks about the fragility of the human body and the PTSD she has suffered as a consequence of seeing such horror first hand. She has “seen more war than most soldiers” and, when reading about her life prior to 2001, we find that she covered the conflicts in Chechnya, Kosovo, Sierra Leone and Zimbabwe. It is an overwhelming realisation that she gave her life for the cause.

A Private War is a harrowing, gruelling true story that resonates on a personal level through the detail and characterisation of Marie Colvin. Disturbing, riveting and awe-inspiring, A Private War reveals the ugliness of war and the price we pay to uncover it.