Based on the true story of a naval warship that was torpedoed by a Japanese submarine in 1945, leading to the greatest single loss of life at sea in US Navy history, USS Indianapolis is a film with a significant story to tell. Tasked with transporting covert parts for the atomic bomb that would later be dropped on Hiroshima, which helped end the Second World War, the heavy cruiser was sunk whilst returning from Guam, stranding 900 men in shark infested waters.

It’s the Captain and his crew’s struggle for survival that anchors the plot, but despite it’s tragic, harrowing and affecting historical subject matter – something that should have propelled it to greater cinematic heights – Mario Van Peebles’ action war-drama sinks under the weight of a lazy script, poor pacing and horribly bad dialogue.

Many of the film’s issues begin before the ship goes down though, as writers Cam Cannon and Richard Rionda Del Castro jump from scene to scene in an attempt to inject some authenticity into the WWII setting. Brawling sailors scuffle in the street, a man pines over his best friend’s girl, and Nicolas Cage’s Captain Charles McVay is briefed on the clandestine mission that requires his ship not to be given an escort as they travel across the Japanese patrolled Philippine Sea. There are so many hurried character introductions at the beginning that there’s no chance of investing in any of the men or their humble backstories. 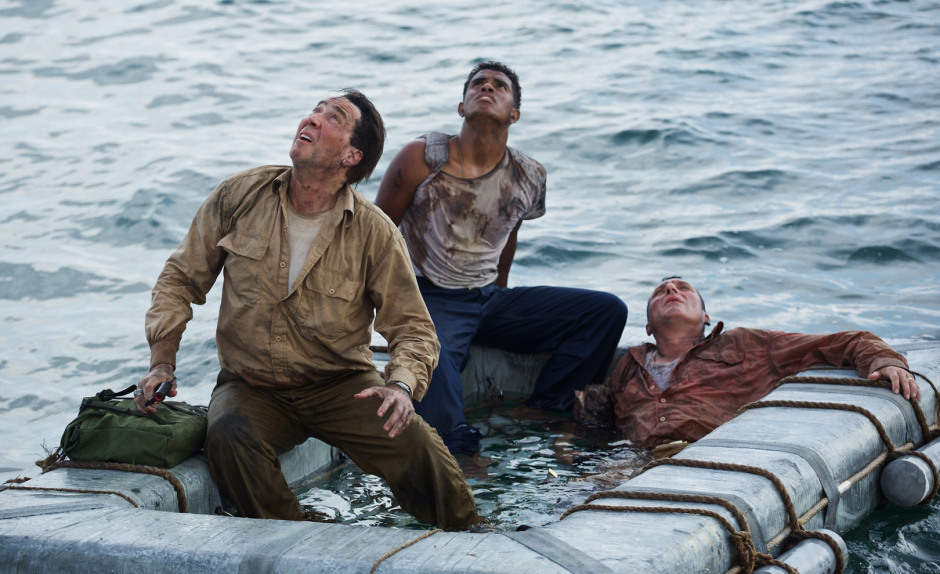 Having safely delivered its precious cargo, the ship embarks on its return mission and is subsequently sunk by the Japanese Navy submarine. 300 men are taken with the stricken vessel, leaving the remaining crew floating in life jackets and rafts, with no supplies, and sharks swarming around them. The prior knowledge that this is a true story lends the ship sinking sequence a modicum of tense disaster drama, whilst the sharks add an extra Jaws-like layer of threat to the natural elements, but it soon descends into nothing more than a game of waiting to see who’s going to die next. 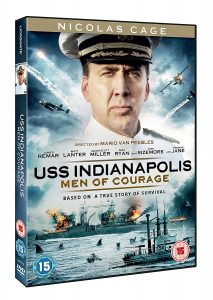 The cast commitment is admirable – particularly from the likes of Matt Lanter and Tom Sizemore – but with such a cheesy script, the dialogue feels shallow and the delivery melodramatic. Even Nic Cage’s star power fails to raise the film from its watery depths. Yet a scene at the end of the film does strike a particularly poignant emotional cord, as a court-martialed Captain McVay (who was convicted of risking his ship by failing to zigzag) comes face to face with the Japanese submarine’s commander and they tearfully ponder their roles in the war, both as patriots and as men. After such over-the-top disaster scenes, this quiet moment of reflection brings home the magnitude of what really happened.

With real-life footage of the rescue mission and interview clips with actual survivors, USS Indianapolis ends on a note of bittersweet sadness. The weight of the story is there, pulled to the surface at brief intervals, it’s just a shame the execution doesn’t give the film the justice it deserves.