It’s one of the enduring mysteries of the universe (or at least the last five years) that a film which was, in essence, a 90-minute advert for kids’ toys became instead a sort of cult classic. The Lego Movie was the film you really thought you ought to hate, but which you kind of ended up loving. It was so irreverent, so witty and so damn quick that it felt more like a successor to Airplane! and The Naked Gun than Frozen.

There’s nothing that studio execs like more than the sound of a franchise stretching out towards the horizon, so, as was inevitable from the start, here we are at The Lego Movie 2: The Second Part. As the tongue-in-cheek title suggests, the playbook is much the same: glittery kids’ plot wrapped in plenty of parent-friendly nods and winks and more little plastic bricks than you can shake a stick at. Promising, but sequels suffer from the law of diminishing returns – can Lego 2 stave off the corporate dross for a second go round?

Just about. The plot is pretty standard fare – enemy steals hero’s friends, hero has to rescue friends, gets helped by mysterious figure, mysterious figure turns out to have a secret, teamwork saves the day. There are some mildly pleasing twists and turns in the story which I’ll not spoil here, including a quick blast of time travel, but it all sits cosily within the boundaries of Hollywood convention.

This time out, though, the suits’ formula is more obvious, the moral bones sticking through the skin of humour with sharper outlines. There’s less of the original’s headlong ad-libbing – the end is clearly visible from the get-go.

That’s a shame, because the scriptwriters have still got the old twinkle in their eyes. The constant self-referential fourth-wall busting is as hilarious as ever, and the whip-fast verbal gags are plentiful. That this much chaos and wordplay remains in a glossy production of this size is commendable. The banterous appeal of the original is still there in large enough measure to keep you entertained, even if there isn’t a six-year-old being mercifully quiet at your heels for the first time in days.

Of particular note is Will Arnett’s Batman, who’s still as colossally funny as he was in his previous two outings. Arnett and the Lego franchise have managed to do for Christian Bale and The Dark Knight series what Bale and Dark Knight did for George Clooney and the Bat-nipples – i.e. made them into a laughing stock. They say imitation is the sincerest form of flattery, and in this case satire is the stickiest form of ridicule. 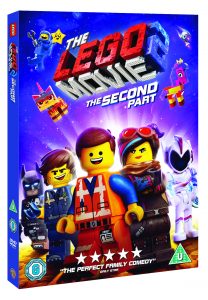 Spaceship Guy gets a (rightly) boosted role, the rainbow cat thing gets a (mercifully) reduced role, Richard Ayoade steals the show as a floating ice cream cone and the ‘Everything Is Awesome’ song starts to act as the Lego world’s holy scripture. The human universe is melded into the flow more directly, giving Maya Rudolph just enough screen time to step on some Lego and say ‘ouch’. Noel Fielding is in it. So is Bruce Willis. So is Nick Offerman. Mad Max: Fury Road gets some serious mentions. With Easter Eggs like these, who needs plot points?

In short, it’s a lot of fun, it’ll make you laugh, and then it’ll pass straight back out of your brain like the popcorn in your digestive tract. A shiny bit of fluff and nothing, but still a notch smarter than the rest.

The LEGO Movie 2: The Second Part is out on DVD, Blu-ray,  4K Ultra HD, 3D and Digital Download now.