Book Review: She Would Be King by Wayétu Moore 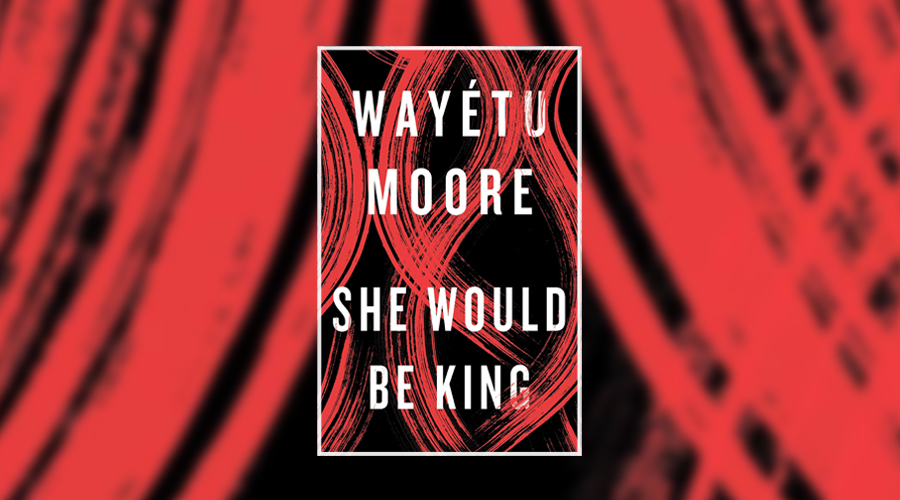 In this exhilarating and memorable debut, Liberian-American author Wayétu Moore explores history and identity through three characters scattered, initially, across the globe, and later brought together during the birth of Moore’s home country Liberia in the mid 1800s, in what became Africa’s first modern republic.

The book opens from the perspective of Gbessa, an ostracised and apparently cursed young girl from an indigenous Liberian Vai tribe. The day of her birth being cursed by the death of an older woman in her village, Gbessa is feared and eventually exiled, whereupon she discovers her unnatural ability – whether blessing or curse – to be able to simply not die. From Gbessa’s loneliness and desire to reconnect to her people, we then move firstly to the story of June Dey, born on a Virginia plantation and apparently also able to survive being beaten and shot with skin unmarked, and then on to Norman, a young boy in Jamaica. Son of a white father and a Maroon slave, Norman inherits his mother’s ability to disappear at will.

From the stories of Norman and June Dey we gather more understanding on the histories behind the movement of people of African descent, recently freed or escaping from slavery tempted by the offering of a true home in this newly created nation in West Africa. Their supernatural abilities in some ways represent their respective resilience and fortitude, but it is Gbessa’s story that we begin with and return to, and that is the story’s true heart. From spending years alone in the wilderness, Gbessa later finds herself integrating in the new society of recently migrated African Americans. Despite this being her country of birth, Gbessa is still an outsider in this new Liberia. Her experiences here depict the tensions between those escaping their own trauma in the US – but also now definitively part of the Monrovian middle class – and the indigenous population, a dynamic that is one of the most interesting in the book and is effectively and sensitively explored.

While this might seem like an epic tale to tell, Moore’s debut is a slight and gripping first novel. Frequently described as ‘magical realism’, which Moore herself has described as being a slightly simplistic label at best, it does seem to be stamped on any book in a non-Western setting that has fantastical elements but is considered too literary to be labelled ‘fantasy’. As Moore has said, in the case of Liberian storytelling, and in many other cases around the globe, supernatural premises are accepted without the bat of an eye, without a need for hasty literary labelling to ensure they are taken seriously. That nit-picking aside, She Would Be King is a captivating, illuminating part of history so unexplored previously in fiction.