I’ll get this over with immediately: The Leftovers is incredible. Really incredible. It’s been that way from the start of season 1, to the end of season 3 and the show as a whole. If you want simple validation of that quality to reinforce your own perspective, there it is. The Leftovers is incredible. I’ve said it again, and countless other reviews, blogs, critics and fans alike will be saying it for a long time. And in a way, that majority expression of praise is enough of a measure of the show’s quality. But with something as profound as The Leftovers, simply declaring it ‘good’ really doesn’t come close to explaining it.

For it to just be good implies there to be some kind of objective marker for the show to hit, and for that objective marker to exist, it would have to be the same show to every viewer, so that every viewer could have the same experience. Clothing made to universal sizes never fits perfectly, but it can fit well enough; similarly, no fiction can truly generate a universal reaction, but some are good enough simulacra that once the audience step inside this separate, shared reality, they’re hard pressed to not react as expected. You’d be hard pressed to find someone who didn’t feel despair, anger, sadness or some such emotion when it came to ‘The Red Wedding’ of Game of Thrones on the small screen, and A Storm of Swords in print, regardless of the personal backgrounds of each viewer or reader.

But The Leftovers has always seemed more personal than that. It can’t not be, really: it’s a show that from the outset challenges each viewer’s individual ideology and perspective on the world. A show where 2% of the world population suddenly ‘depart’, to be discovered to have been transported to a parallel world of sorts, is inherently different to a viewer who holds an absolute belief in a ‘Judgement Day’ or ‘afterlife’, or to a viewer who holds an absolute disbelief in either concept. Something like American Gods is fascinating because it imposes all perspectives on all viewers. It agrees the existence of ‘White Jesus’, so long as Christians of that belief accept the existence of ‘Mexican Jesus’, and every other deity across human history. The Leftovers, conversely, offers the circumstances, and leaves it largely up to the viewer to fill the void.

It’s just about the only show that’s actually drawn tears from me (I’m not some apathetic alien, but rather my sadness tends to remain internal rather than be externally represented), but my tears at the bleak but strangely uplifting end to season 1 are my reaction alone. My experience bears little resemblance to others; Maureen Ryan of Variety, whose fantastic article on the matter (which is recommended by Carrie Coon as well as me) you can read here, saw in the show a recognition of her own experience living with the possibility of having Huntington’s Disease, of living within multiple states where she is certain she has the disease, and can forget all about it. When a show is so transparent, while still covering so much ground, how can it just be ‘good’? That would reduce it to something that even attempts to offer an answer, when really the show simply offers countless bold, pertinent questions, questions that it’s left for the audience to answer. 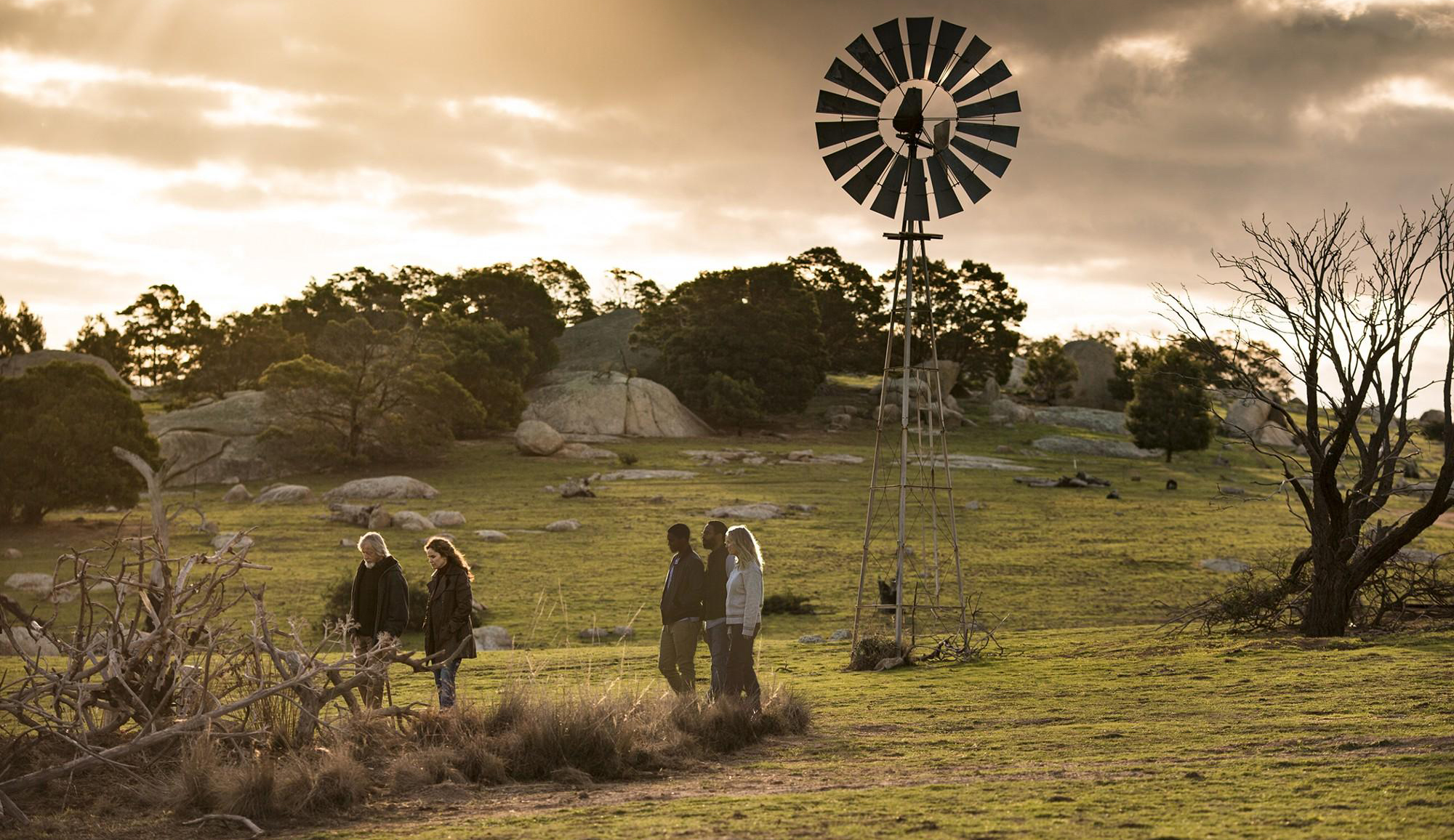 Even at the end, there’s the obvious question of whether to believe Nora’s explanation to Kevin. Perhaps the machine worked as she said, and she reached New York and saw her kids and husband, happy, and came back to ‘our’ world. Or perhaps it didn’t, and the reason she runs away from Kevin’s fantasy where they only ever briefly met, and insists that ‘she doesn’t lie’, is because the story of finding her kids has become her fantasy, her way of finally moving on from their absence. Both are perfectly plausible within the show: we saw Kevin cross over to somewhere, so why couldn’t Nora, but then, Nora isn’t always open and honest.

The ambiguity of that ending fits perfectly with the show overall. The ending to Lost, Damon Lindlelof’s previous high-concept drama, was squarely focused on the ‘big picture’, on what was happening. What closure there was for the characters was passive, less about their choices and personalities, and more about their role in the ‘grand scheme of things’. The ending to The Leftovers, though, focused on who this was happening to, because ultimately that’s what matters. The end of a fake world only has value through the lens of those for whom the world is real. Maybe Kevin’s actions in the ‘other world’ averted the flood in episode 7, or maybe there never was a flood at all; that objective ‘success’ was less important than the impact upon him and Kevin Sr., whose last appearance of the show had him sitting on the roof, unsure of what comes after what’s meant to be the end, just as the woman of 1844 had in the first episode of the season. Centric episodes across the latter half of the series offered part closure for characters like Matt, Laurie and Kevin Sr. himself, so that by the final episode, it was all about Nora and Kevin, Kevin and Nora. Whatever the ‘big picture’ represented was up to the audience.

That’s character focus is how the show has been since the beginning, but at the same time, it’s evolved like nothing else has. The ambiguous big picture of season 3 was whether there was another world where Kevin was the President of the United States, representing the Guilty Remnant Party. The ambiguous big picture of season 1 was whether the Garvey family could possibly move on from the trauma the Mapleton branch of the Guilty Remnant had caused. Season 1 wasn’t about the mystery of the Departure, but just about coping with it. As the show has moved away from the source material of Tom Perrotta’s book, the narrative focus has expanded exponentially, but without that original basis of something ‘real’ to cling to, there wouldn’t have been the same connection to the characters. 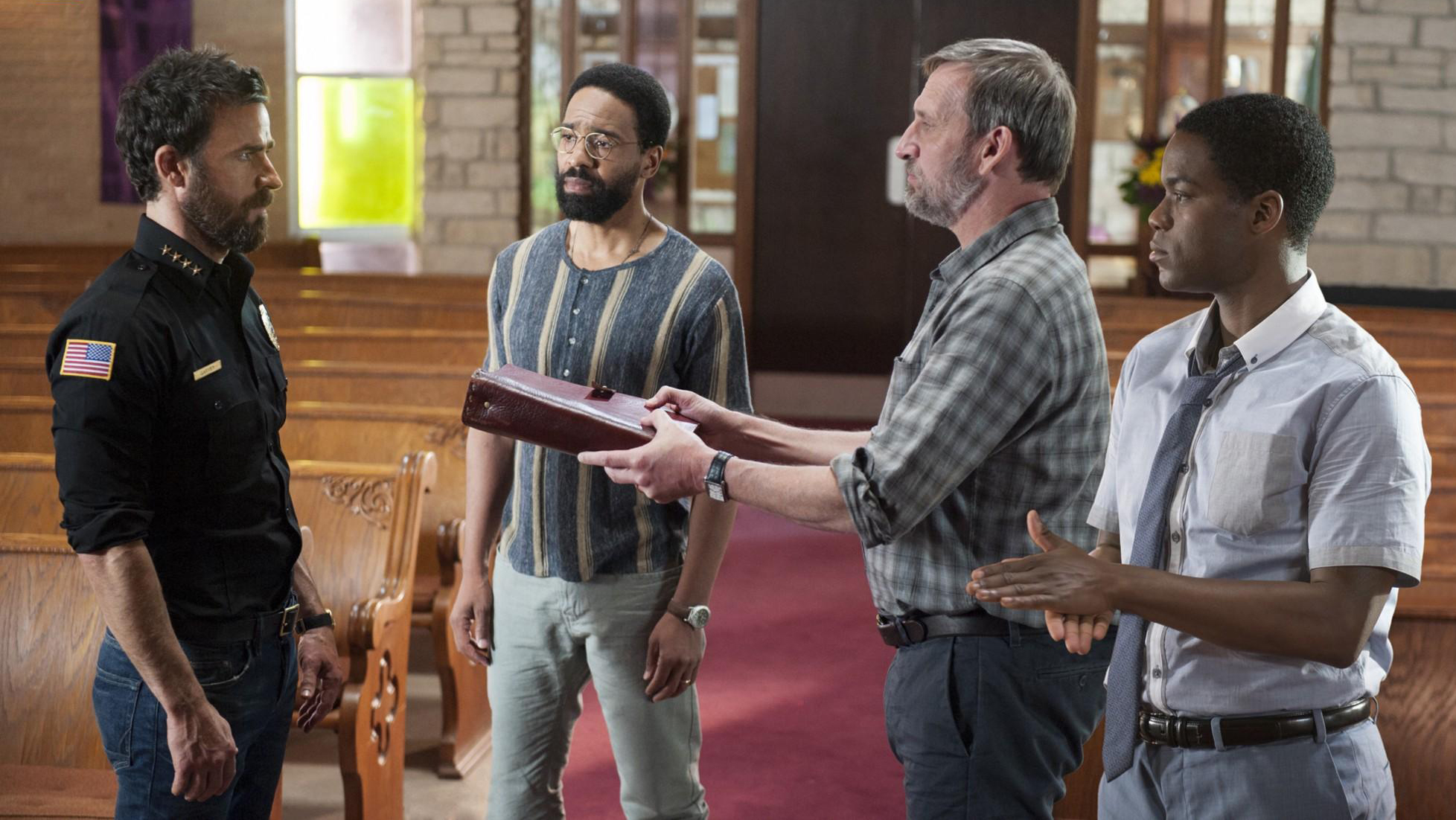 As the narrative has grown, so too has the atmosphere of the show. Season 1 was unrelentingly bleak – as I argued at the time, how could it not be? – but subsequent seasons managed the audacious feat of adding surreal, insane humour to the mix, all the time maintaining the sincerity of the narrative. Every moment of near-farce – every penis scale, for example – is there for a reason, and is coupled with a stark reminder of the brutal impact of the show’s events upon the characters. Bill Camp’s not-so-God character might be making it all up – and trying pick-up lines on Liv Tyler in the other world – before death by Frasier’s holy lion descendant, but he had a real impact upon Matt’s faith through their conversation. And while Patti’s reappearances post mortem injected Ann Down’s superb comic timing into those scenes, it was at best morbid humour, as she, in episode 7, basically convinced Kevin to blow up the world, and also always served as a reminder of who she was while ‘alive’ – violence, emotional abuse, cult leader and all.

Patti came back time and time again – perhaps as an imprint on Kevin’s psyche, perhaps really as someone transported to the ‘other world’ I keep mentioning – but The Leftovers played fast and loose with its cast across the span of the show. The move to Jarden/Miracle in season 2 meant a cull of the superfluous members of the season 1 cast – no room for those like Aimee (Emily Meade), Jill’s friend and Kevin’s possible sexual partner, for example – and the final two seasons thinned the crowd further. Jill slowly diminished in significance over time, barely appearing in season 3, and the start to the season saw Meg and Evie killed in an air strike, to become mirages for Kevin to project onto others, or meet in the ‘other world’. Rather than shoehorning everyone into every situation, characters came and went as made sense.

So yes, The Leftovers was good. Even more, it was incredible. The music – Max Richter’s soulful compositions joined by an increasingly eclectic mix later in this last season – the acting, the directing, the visuals, the narrative, the characters. All of it. But it was so much more than that too.