The Flash starts its fifth season with ‘Nora’, its most ambitious episode yet. Which is saying something for a show that routinely maximises its small TV budget.

Ending with a famous comic-book set piece many have anticipated since the show started, Barry (Grant Gustin), Wally (Keiynan Lonsdale) and Nora (Jessica Parker Kennedy) phase a falling plane through skyscrapers and a bridge before safely landing it in the river. It’s a sequence many blockbusters would struggle staging, but the team behind The Flash smartly show fleeting glimpses of the action, opting for an interior approach, both literally — most of the action is set inside the plane’s cabin — and emotionally, as Barry bonds with his daughter.

Yes, Nora is Barry and Iris’ (Candice Patton) child from the future, a speedster who travelled back to the past and is now stuck due to some of the pseudoscience The Flash is fond of. This show has never shied away from time travel and this time Team Flash are taking a more laissez-faire approach to the continuum. The early ground rule of not talking about the future is quickly forgotten as Iris takes up the rare opportunity to talk to the daughter she has yet to birth. 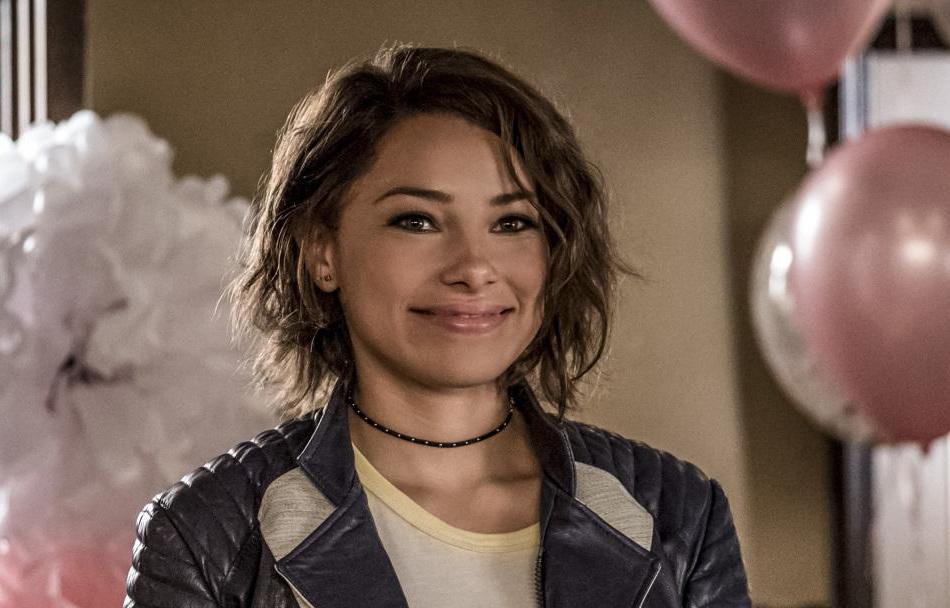 While the writers do make some throwaway quips about future events, some of which a drunk/hungover Cisco (Carlos Valdes) stops with a spoiler warning, this is the first instance of the show not setting up a foreboding cliffhanger when characters travel to the future. Nora’s appearance deepens the characters. Iris struggles to connect with her adult daughter, unaware they don’t speak in the future, while Barry distances himself, afraid to form a connection.

Patton has really taken ownership of Iris. She controls every scene she is in and Nora brings out Iris’ vulnerabilities. Her scenes with Gustin, as Barry and Iris try making sense of their situation, have a tender energy as the pair lean into their easy chemistry. For his part, Gustin is emotionally raw as his distance is linked back to his traumatic childhood. His powers tore his family apart and all he wants is to watch his child take her first steps. Having met her as an adult, he no longer can and our hero doesn’t know how to deal with the situation. Parker Kennedy takes on elements of both actors, and her performance firmly places Nora as Barry and Iris’ daughter.

The Flash succeeds because after everything the characters have been through, all the weirdness they have witnessed, they remain relatable. Team Flash react to their crazy situations in ways you’d imagine you’d react. Nora’s appearance comically drives Ralph (Hartley Sawyer) to discover the “manyverse”, his version of the multiverse. He struggles wrapping his head around time travel and adorably believed Earth Two was Earth Too as in in “Earth Also”.

After a few seasons feeling a bit stale, ‘Nora’ pushes The Flash into a new gear. It’s good to have Team Flash back.