From multiple close-ups of clocks at the beginning of the episode and AURORA’s ‘Murder Song’ providing a very literal countdown, it is clear ‘Infantino Street’ is The Flash wondering how you’d spend your last living day. The clock is ticking as Barry Allen/The Flash scrambles around in the last ditch attempt to save his beloved Iris West (Candice Patton).

As established last week, the speed force bazooka created by Tracy Brand (Anne Dudek) needs a power source that is kept in the “most fortified building in the history of fortified buildings”. Barry, the hero with a conscience, breaks into ARGUS so he can hold onto the hope of saving Iris. The heist plays out as you’d imagine it would, a powerless Barry gets to slide under a closing door Indiana Jones style, but you can’t help thinking his little romp is a side quest.

As her possible death approaches Iris starts accepting her possible fate and uses her remaining 24 hours to say her goodbyes. Watching Iris come to terms with the life she has is an emotionally impactful moment. The writers, smartly using the prophesied endpoint, deepen her relationships beyond Barry. The Flash is at its strongest when it focuses on character and watching Iris and Joe (Jesse L Martin) talk about something as mundane as skipping curfew is has more emotional weight because of the heightened drama surrounding it. Martin and Patton are obviously excellent, reminding us that the West family is the heart of The Flash. So it’s a shame many of Iris’ scenes are sacrificed for Barry’s dalliance. 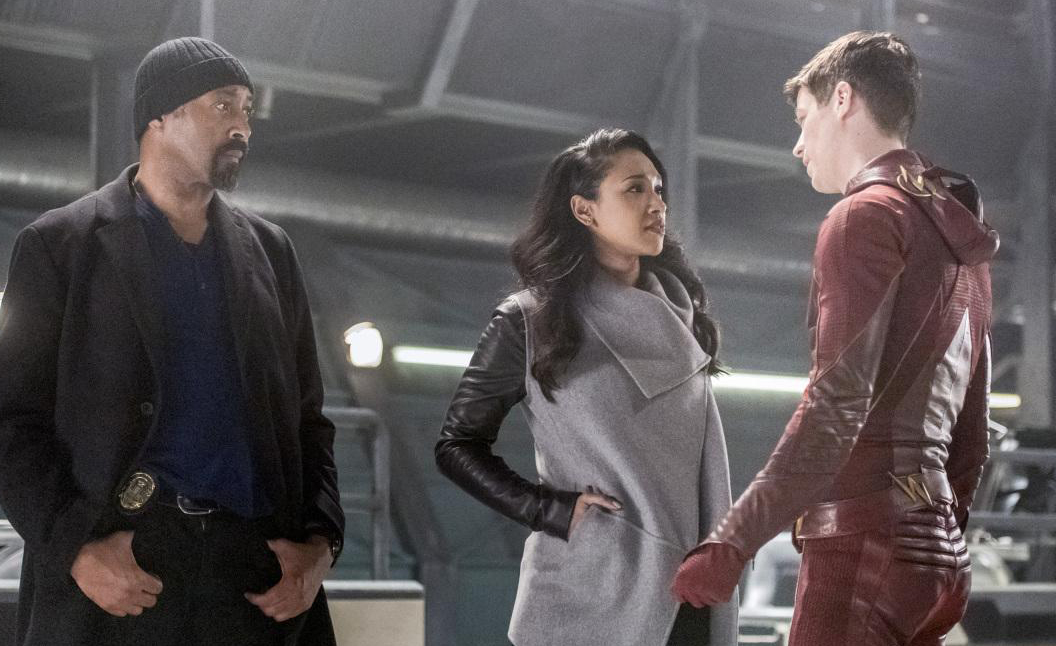 Fortunately, this dalliance features Captain Cold (Wentworth Miller). Miller’s histrionic line readings are always welcome as they provide a nice splash of comedy that counterbalances the doom and gloom. Cold is still one of The Flash’s best recurring villains because he understands who The Flash is. He knows how to exploit Barry and he knows why Barry beats him. The Flash has spent a lot of time this season exploring Barry’s heroism, with Cold reminding the scarlet speedster why he is a unique superhero.

If Barry is having a personality crisis, then HR (Tom Cavanagh) is having a full on meltdown. The resident goofball is questioning what good all his inspiration does when he normally blunders away some secret information the next minute. HR has never seemed fallible and Cavanagh relishes adding this dimension to this characterisation. It’s a nice evolution for the character, it just comes at the worst moment because The Flash is about to do what The Flash has said it would do.

Yes, Iris West dies. Savitar impales her. Barry holds her body. The fact the show went there is nothing new. The Flash has always dispatched supporting characters just before the finale, but this time it felt different. Somehow this death was still surprising even though it wasn’t unexpected. The Flash has made us care for its characters so watching Iris bleed out makes you watch the screen in silence for a couple of minutes. Yet, the show reintroduces certain elements this week that suggest there is more to this death than it originally seems. With the final premiering in the UK next week, it’ll be interesting seeing how Team Flash recovers.