Faces are the key for conveying emotion. The slightest grimace, the smallest tear create a wealth of depth and feeling. It’s a bold move on Andre Ovredal’s part to make the main character of his sophomore effort an emotionless, pale corpse and it’s even bolder to spend so long fixated on her cold face.

The face in question belongs to Jane Doe, an anonymous body found by the police in the basement of a gruesome crime scene. It’s the job of Tommy Golden (Brian Cox) and his son, Austin (Emile Hirsch), to carry out the autopsy and discover what happened. To give away any more of the plot would be to give away the film’s smart, and sometimes unexpected, twist and turns.

What is key to this chamber piece is the central relationship between Cox and Hirsch, who manage to imbue their chemistry with a sense of tenderness and affection. There are heartfelt, brief moments that paint a detailed picture of their life outside of the morgue while simultaneously adding emotional depth. Brian Cox is perfectly cast as Tommy, a grieving father missing his wife, bringing a strong presence in a role that plays well into Cox’s wheelhouse. Never feeling like he has to work for it yet still believable. Emile Hirsch puts in the stand out performance with some impressive emotional scenes, making you wonder how this young actor hasn’t managed to secure more solid roles. 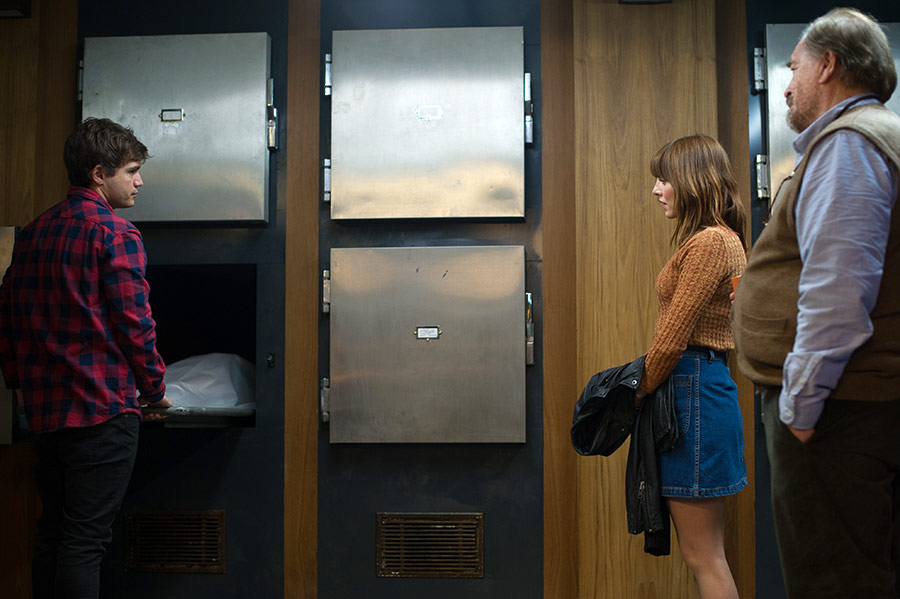 The Autopsy of Jane Doe‘s masterstroke is its ability to utilise the confined space it burdens itself with. Never does the narrative feel repetitive when it continuously jumps from one room to another and back again because the scares are so well paced out and blended with emotional moments, it all fits perfectly. Ovredal orchestrates each beat to flawlessly coincide with the next, allowing the film to flow and meander its way to a solid pay-off. The second act is burdened with the brunt of cliché horror tropes. There are jump scares aplenty yet Ovredal never relies on these cheap tricks, instead using them to comical effect brilliantly while also crafting them as genuinely terrifying reveals. Although, the use of a song on the radio feels very Jeepers Creepers, it’s a subtly important element.

There’s a tonal shift in the third act that may lose some – it doesn’t alter the pace of the film but if you go in with certain ideas about where the plot goes, you may be disappointed. Yet it never depletes the film’s brilliant originality or undermines the first two acts. While it doesn’t have the instant likability of Trollhunter, Ovredal’s sophomore effort is a sophisticated, claustrophobic horror that offers a lot more under the surface if you are willing to dissect it.