For those that don’t know, Secret Sessions Live is a monthly gig night held at The Hospital Club in Covent Garden. As the name suggests, the line-up is kept a closely guarded secret until the acts walk out onstage. You simply turn up and see what you get. If that sounds risky, rest assured that a combination of London’s rich music scene and the organisers’ canny feel for Next Big Things means that the quality is uniformly high. If that doesn’t convince you, the tickets are free. What do you have to lose?

This is the first time Secret Sessions has been held on a Thursday (17 August) after a few months of Saturdays, and in London’s perverse logic that means the club is stuffed. Scenesters, hipsters and grizzled old-timers all rub shoulders in the chintzy Oak Room, sipping overpriced beer and jostling for prime position. It’s all very good natured – there’s a camaraderie in the air, a sense that we’re here to share in a collective passion.

First up this evening are The King’s Parade, a soulful rock quartet with a skinny Dave Grohl on the drums and a keyboardist who, from the looks of his artfully spiked hair, missed his calling in an early-noughties US pop-punk outfit. They’re a blinding opener, so full and loud that the more sedate second and third acts suffer as a result – these guys should really have closed us out. Their music is hard to categorise. The guitar is clean and smooth, the rhythm section is tight and punchy, and the choruses are drenched in vocal harmonies. There’s plenty of soul in there, and a hint of blues, with a pop sheen over the top, all underpinned by funky Rhodes kindlings.

Their real secret weapon, though, is the lead singer’s voice – artfully controlled but a little ragged round the edges, it provides the magic that ties their songs together. Obscure reference, but he sounds like David Gilbert from The Rockets, and that’s a compliment. They’re rightfully met with riotous applause at the close of their set.

Next, we have George Taylor, a cross between Donovan and Pete Doherty who arrives onstage with a hat, a beer and an acoustic guitar. Apparently a favourite of Zane Lowe, he plays straightforward singer-songwriter ballads which, while not exactly awe-inspiring, are reasonably engaging. Intentionally or not, though, he comes off as having not practiced enough for this show. He decides to play a new song, but then promptly forgets the last verse and has to have a mate shout it to him from the crowd. Kind of funny, but not very professional – an impression that’s compounded when, having won an encore, he takes several minutes to think of another song. 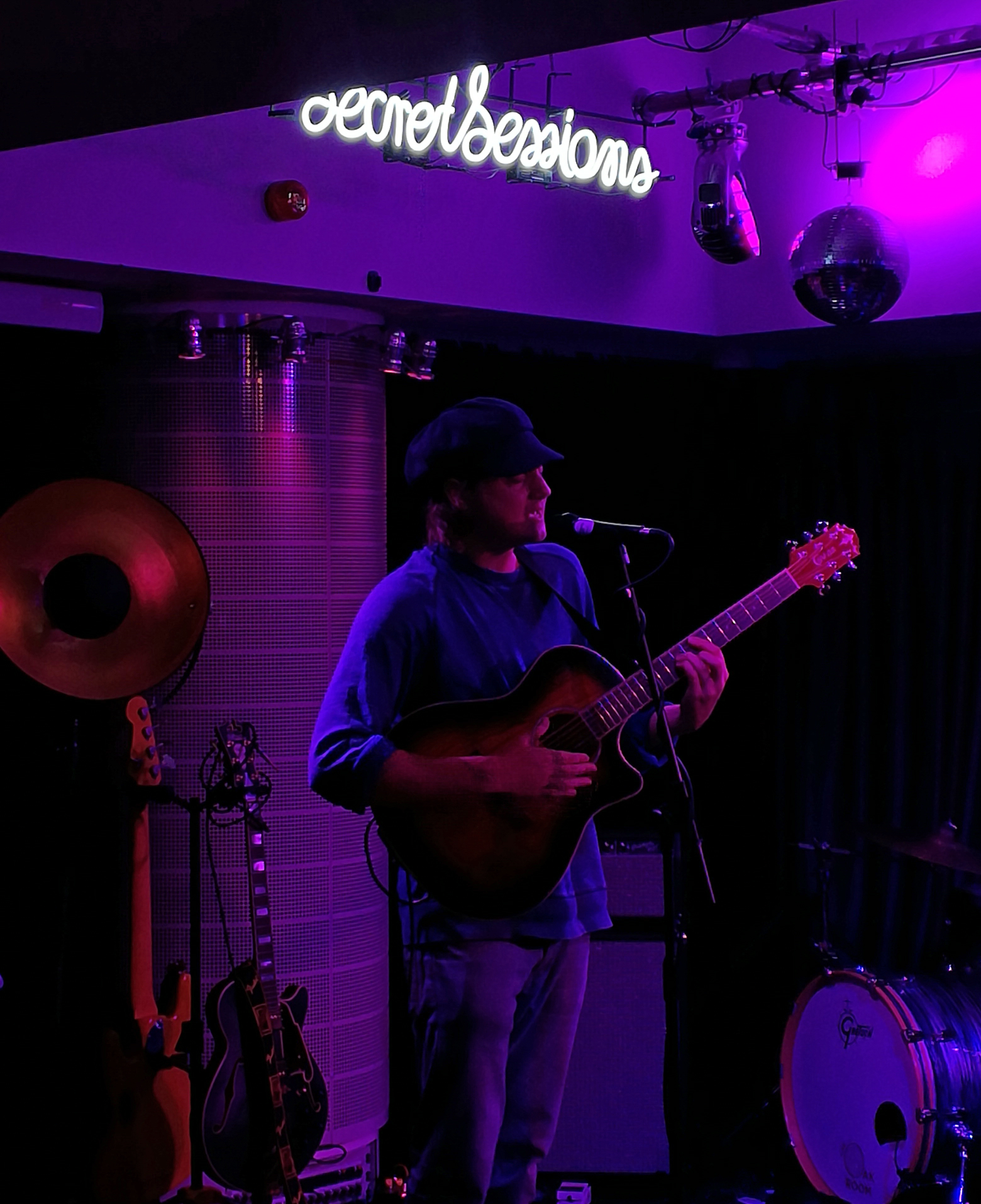 Paradoxically, the best moment of the set comes when he leaves off his own material in favour of Dylan’s ‘Don’t Think Twice, It’s Alright’. The quality of the song shines through and provides a suitable vehicle for Taylor’s voice, and for a moment there’s rapturous silence in the room. Covering Dylan is always ballsy, but tonight it showed up the cracks in the rest of the set. Taylor’s recorded output is far better than this evening’s performance – he deserves the benefit of the doubt, but there’s some stagecraft honing to be done.

Finally, it’s Tusks, a one-woman band equipped with strat, drum machine and keyboard. She’s somewhere in between Ellie Goulding and London Grammar, all eerie, keening vocals and ominous rumbling samples. Her music has a melancholy, apocalyptic beauty, similar to the likes of Bo Rocha and Meadowlark. The amount of noise she conjures from her setup is impressive, as is her impeccable timing. One hand on the keys, the other battering out syncopated rhythms on the pads, she’s like the eye of an aural storm. If this review just got a lot more flowery, it’s because Tusks’ music demands it. It’s deep and mysterious, baroque even.

There is sometimes a danger that live acts which rely heavily on samples can fall into the ‘push play and sway’ trap, but Tusks is clearly making this music live. There’s real skill in the way she controls her menagerie of electronic sounds. To top it off, her voice is gorgeous – precise, crisp and heartfelt. This was a fascinating performance.

Secret Sessions is a real gem in the heart of London. What more could you want than top quality, curated, free live shows? The element of discovery adds an extra dash of fun – you get a great night out, and you organically find your new favourite band. If you’re in the area, get yourself there in September.