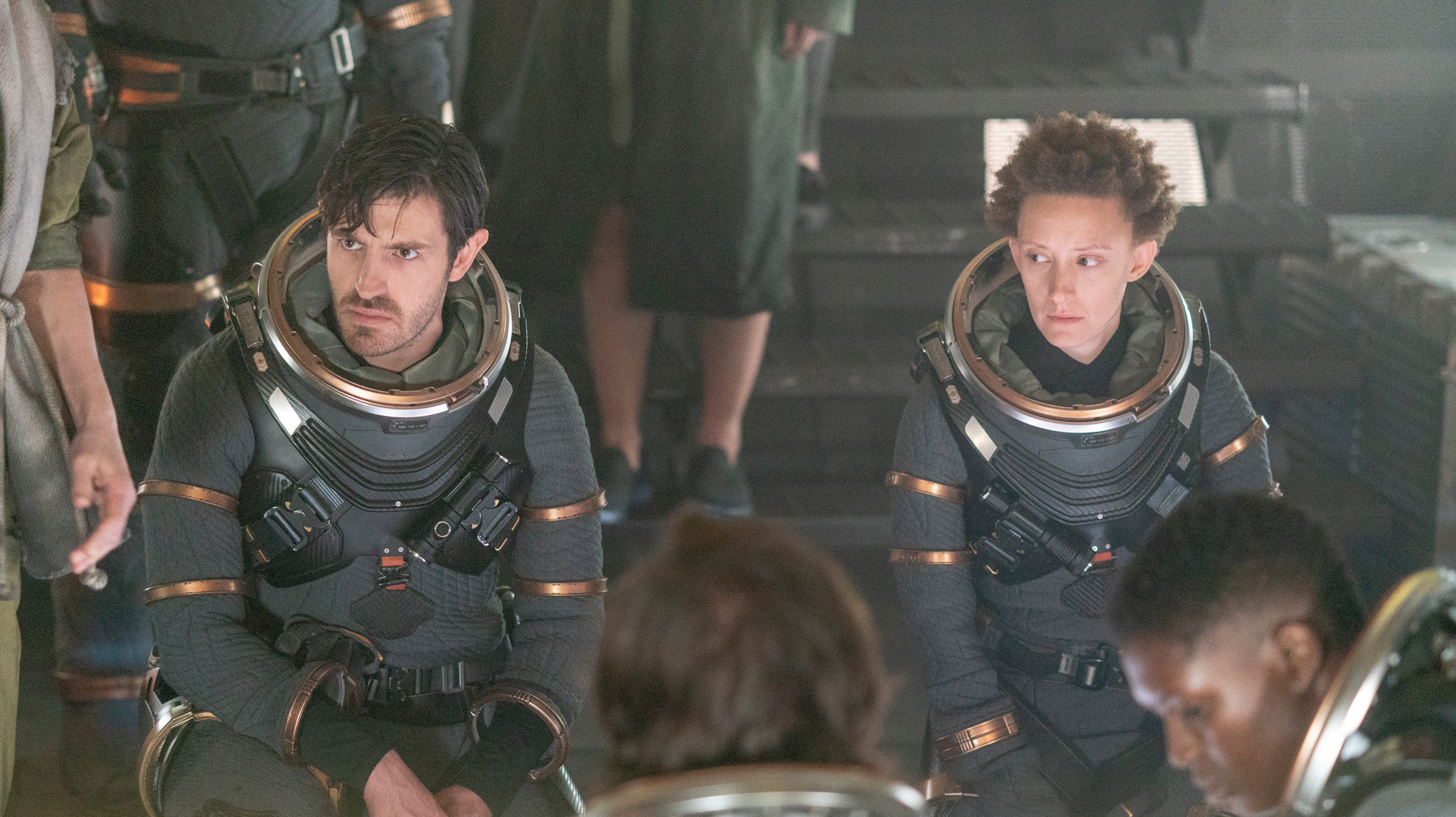 Just the mere mention of the name George R. R. Martin will be enough to tempt viewers to watch Nightflyers, the new show adapted from the author’s 1980 novella, which hits Netflix on Friday (1 February). Blending horror with psychological thrills, this space-set science fiction show certainly has the epic scale and ambition of Game of Thrones. Indeed, if ambition were all it took for a show to be a success, Nightflyers would be raking in the awards. Yet whilst the adaptation of Martin’s fantasy novels was ground-breaking and exciting when it premiered in 2011, Nightflyers feels like a compilation of sci-fi films and TV shows from the past ten years; it looks impressive but what it lacks is originality and depth.

The year is 2093 and a team of scientists embark on a voyage deep into space to make contact with a mysterious alien life form. Also aboard The Nightflyer ship is a powerful telepath with the ability to mentally and physically torture everyone on board, and a reclusive captain who only appears in holographic form. The mission goes awry almost immediately, as frightening events throw the ship and its crew into chaos. With threats both physical and concealed, the scientists start to grow suspicious of each other. Soon it’s not just their mission to meet the extraterrestrials that’s in jeopardy, but the entire crew’s survival too.

Borrowing extensively from the sci-fi back catalogue, the show’s writers waste no time setting the scene for a mission gone wrong with a heart-pounding opening that revels in classic horror tropes. A bloodied and terrified Dr. Agatha Matheson (Gretchen Mol) hides in the ship’s lab from a violent pursuer and sends a message into space warning people to stay away from the Nightflyer. Jumping back in time, we see Matheson, a psychiatrist with expert knowledge of telepaths, embarking on the mission with astrophysicist expedition leader D’Branin (Eoin Macken) and the rest of the crew. They all have high hopes of conversing with the aliens and saving a dying earth, but there’s tension on board from the off. We know it ends in disaster, even if they don’t. The question is how does it all go so horribly wrong? 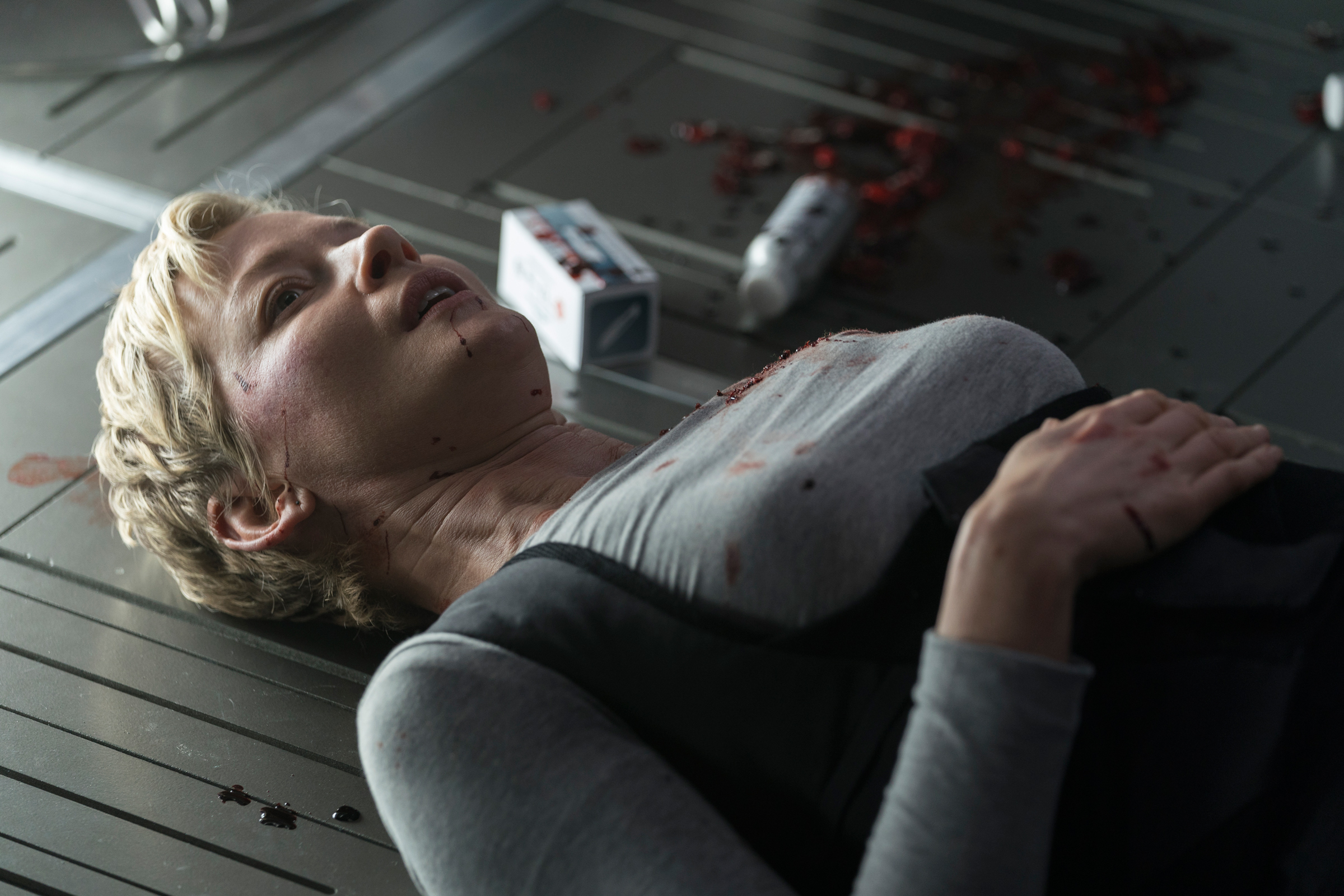 Nightflyers’ big fault is not a lack of ideas, but too many, and all of them borrowed. Granted, many of the ideas would have been innovative when Martin’s novella was released back in the 80’s, but sci-fi has come a long way since then and we’ve seen telepathic characters; we’ve seen space missions ending in disaster; we’ve seen technology going rogue. Complex concepts surrounding morality, memory and humanity aren’t given a chance to breathe, and the characters – many of them with potentially fascinating, complicated backstories – don’t develop at a natural pace. Throw as many slick, futuristic visuals at audiences as you like, it’s not going to disguise the story’s surface level depth.

The show is at its most thrilling when it goes full-on horror, paying homage to its pop culture influences, specifically Stanley Kubrick – whether intentional or not. A scene in which characters fall foul of a weaponised drone with a mind of its own brings the same level of panic and terror as the laser scene in Resident Evil. Yet that’s not enough to sustain the pace or the watcher’s interest in the long term. The psychological elements that play with what’s real and what’s a figment of the characters’ minds (D’Branin constantly seeing his dead daughter, for example) should make you care about – or at the very least invest in – the characters, but all it really does is introduce some contrived dynamics that just serve to confuse viewers further.

A lack of sympathetic and likeable characters is another issue, though thankfully the ensemble cast is strong enough to make viewers want to connect with the characters, even if the derivative plot makes it a challenge. In a genre that’s constantly pushing boundaries and overturning conventions, Nightflyers doesn’t even attempt to offer up anything new, and that’s frustrating when you’ve got stellar actors like Eoin Macken, Maya Eshet, Jodie Turner-Smith and Sam Strike on board. With the sci-fi horror of Helix and the space drama of Origin, Nightflyers is an eerie yet unsatisfying hybrid that aims for the stars and misses its mark entirely, breaking apart as soon as it leaves Earth’s atmosphere.

Nightflyers launches on Netflix on 1 February 2019

Game of Thrones: What can fans expect and, more importantly, what do we want from season 7