Myriam and Paul are, respectively, a lawyer and a music producer, in the process of transitioning from hipsters to bourgeoisie. Myriam decides that she’s had enough of being a stay at home mother and, with no prospect of the children being enrolled into a local creche, the couple decide to hire a nanny to allow Myriam to resume her career.

Following a montage of interviews with applicants, Louise (Karin Viard) – a poised, attractive widow who establishes an instant rapport with the children during her interview – is given the job. Initially, Louise seems to be the perfect nanny; she’s responsible, the children are very fond of her, and in addition to her childminding duties, she seems happy to clean the couple’s apartment as well.

Trustworthy and composed as Louise seems, though, she frequently seems to be on the edge of anxiety, and clearly resents the occasional presence of Paul’s mother Sylvie (Noelle Renaude).

Occasional glimpses of Louise’s life away from the family reveal her to be a solitary individual, living in a poor area of Paris. She begins to break down mentally, and the story steers itself towards a grisly denouement.

The novel begins with the final events of the story, with the events preceding it told in flashback. I can’t help thinking that the film might have been more effective had it followed that format. Given that nannies in movies almost always turn out to have a nasty streak, with the exceptions of Mary Poppins and Mrs Doubtfire, I’m not sure that the original structure of the story would have been less suspenseful.

What carries Lullaby more than anything else is Karin Viard’s performance as Louise. She plays, brilliantly, an insecure woman with a veneer of control, on the edge of anxiety and resentment whenever something unexpected happens – an unanticipated visit from Sylvie, an invitation to join the family on holiday – to jolt her routine and sense of place. 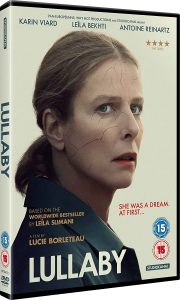 Under the main plot, Lullaby is a story about loneliness. Louise has a grown up daughter of her own, but they’re estranged from one another; she finds love and a sense of purpose with the two children, and is clearly terrified of any real or imagined threat to those relationships.

Lullaby is an effective drama that’s worth watching for Viard’s performance alone. Atmospheric as the film is, it has a slightly superficial feel at times; the inequality of the relationship between Paul and Myriam on one hand and Louise on the other might have been worth exploring, as might Louise’s backstory.

Lullaby is out on DVD and Digital now