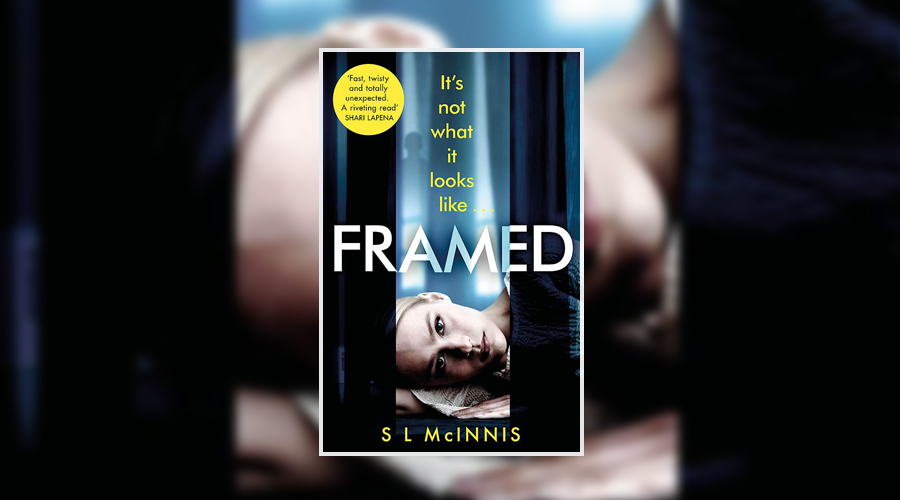 Dark, twisted and dusted with a kind of dangerous glamour throughout, Framed by S L McInnis is the kind of cool, contemporary thriller that readers won’t forget in a hurry. Part domestic thriller, part crime drama and part procedural, Framed opens in the aftermath of a crime scene and doesn’t let up from there, piecing together a tense and exciting story that unfolds at break-neck pace and will keep you guessing right up till the very last page.

Until Cassie Ogilvy shows up out of the blue, everything in Beth Montgomery’s life is completely fine. With her film producer husband Jay and her perfect house in a very exclusive part of Los Angeles, everything about Beth’s life appears to be pitch perfect – not to mention a world away from the life she’d lived before. But then Cassie, Beth’s college roommate and prolific wild child, shows up in LA with a duffel bag, a suitcase and no place to stay and everything changes for Beth.

As Beth invites Cassie to spend the week with them, neither she nor Jay have any idea about the dangerous things that Cassie is running from, but her presence in their home will put Beth and Jay right in the middle of it. As the twisted web of Beth and Cassie’s history untangles, high tensions, shifting suspicions and betrayals abound and it soon becomes clear that there will be big consequences for them all.

“It didn’t matter that they hadn’t talked for more than a decade. Best friends were best friends. When Cass showed up, trouble on her heels – that’s when Beth was finally reminded who she really is.”

In a word, Framed can best be described as compulsive. It opens in a state of high tension as both Beth and Cassie are escaping two very different situations, each with the kind of chaotic energy that promises fireworks when they’re thrown together, and from there the action jumps between five key characters and the role each of them plays in the life-changing week that follows. As the narrative shifts between character and jumps around (ever so slightly) in time too, McInnis cleverly introduces the pieces of a puzzle and goes on to add several more of them in bite-size chunks of action that have you racing through the book quicker than you realise. As a result, every page simmers with tension as the final picture begins to come together and even if you guess the ending, chances are Framed will definitely throw you a few curveballs that have you second guessing yourself too.

But while the plot twists and a narrative that leaves you constantly on-edge will undoubtedly get readers turning the pages, one of the biggest obstacles to completely enjoying this novel is the characters themselves. There’s no denying that the key players are all fully-realised, three-dimensional and vivid characters with complicated backstories, intriguing interpersonal connections and their fair share of skeletons in the cupboard. They’re all certainly interesting, but none of the characters are particularly likeable, which makes trying to decide who to root for in a novel that operates solely in shades of grey a fairly difficult task.

Thankfully, with no clear-cut moral victor and murky motivations driving everyone, there’s enough intrigue in Beth and Cassie’s complex dynamic to keep readers invested. Mild-mannered Beth and loud, brash Cass make good foils for one another and their relationship is intense from the very start. McInnis also does a great job of slowly peeling back the layers of history that bind these two together throughout the novel, to the point where you’re not entirely sure of what the truth is, and it builds towards a conclusion that feels entirely right and justified by the time you’ve finished the novel.

Despite a jarring and jumpy start and just a few too many loose ends by the closing chapter, Framed more than earns its reputation as an original and unputdownable thriller. There’s a compelling crime element to this narrative, with ongoing questions about a bloody shoot-out and the ever-looming threat of a dangerous drug cartel hanging over these pages but, more than that, this is a suspense novel through and through. Exploring ideas of identity, class, friendship, marriage and betrayal, Framed is perfect for fans of novels like The Couple Next Door and The Last Mrs Parrish – and it more than holds its own on the thriller shelf.

Framed was published by Headline on 2 April 2020