Mystery and investigation reign once again in this week’s Legion, putting horror on the back-burner as we step back from David’s narration. Episode 4 helps put together some more pieces of how David ended up at Clockworks, and why he’s such an untrustworthy narrator. We also explore a number of interesting pairs, delving into some of the side characters and their personal relationship dynamics. Legion sets up enough cliffhanger mystery by the end of the episode to make it worthwhile, but it’s not the strongest episode of the series so far.

The episode opens with a man, initially unknown, speaking to the camera. He repeats himself, like he’s practicing a speech, and explains that there are two types of stories told to children. One story involves a cute character using empathy to overcome a challenge, putting the child in the character’s place. The other uses fear, with a tragic situation the tool for teaching – in his example it is a boy being warned not to get too close to the sea and being cautioned about being sucked in. This story, he tells us (in a meta moment), is about what happens when a cute creature ends up getting too close to the ocean, and what happens next.

The final act is by far the best part of the episode, though I won’t spoil it here, connecting a number of characters, adding in some action and once again using music perfectly as the backdrop to a scene which allows us to imagine the voices rather than forcing them. In a Marvel context, it’s the opposite of what is being done in the newest movie, Logan, where every scream and snikt is painfully audible.

Leading to this final scene, one of the main threads is the character of Cary. David is confused by him during the early episodes as the man appears to call himself Cary, as well as speaking to a woman named Kerry. It’s unclear what the dynamic is, until now. Here, we see the Kerry split off from Cary. It’s a really intriguing dynamic and mutant power, where they both occupy the same space in a singular body. We learn that Cary was born first and Kerry also only ages when outside of Cary. In terms of personality though, he’s a reserved scientific type bordering on timid, whilst she longs for the fight.

In one scene where she’s explaining this to Syd, she talks about how Cary does the boring things, noting that she doesn’t know what “you guys do in the bathroom”, while she gets to enjoy the action. She clarifies though that she’s happy as long as she can protect him, taking comfort in their complimentary roles. It’s this resonating bond that makes the fight scene near the end so good, speaking to the unity of the two, even when apart. 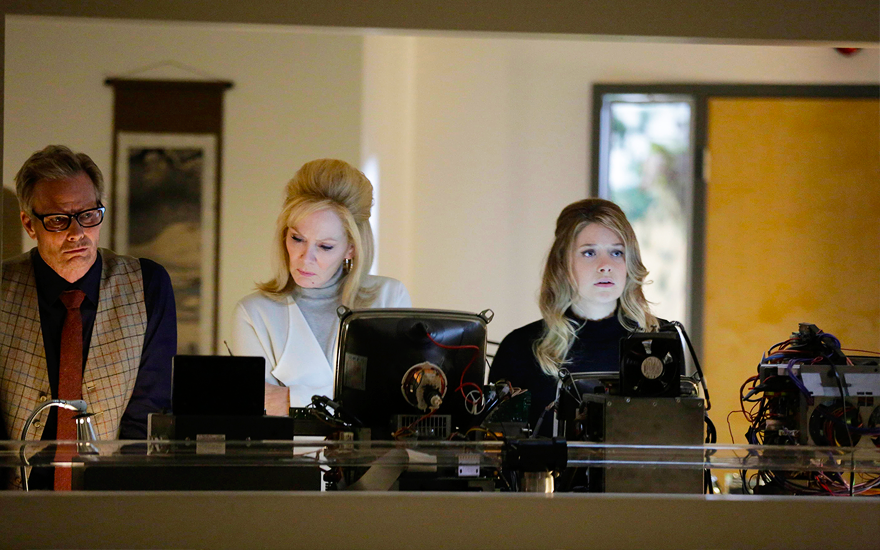 The major plot thread in this episode is centred around Dr Bird sending woman Cary, Ptonomy and Syd out to find more information about David. They search Dr Poole’s office, marrying the memory version to the real room. Here Ptonomy explains that objects have memories too and this helps them discover some of what David hid. Namely, they explore how David’s file says that he punched Dr Poole into a coma when he discovered him in his office. This jars with Syd’s understanding of him, an issue that comes up again and again within her narration of this episode.

They’re eventually led to David’s ex girlfriend and Ptonomy exploring one of her memories. The visuals within her mind reflect a clear difference to David’s. Naturally, his match the overall tone of the show, plenty of contrast but a lower saturation. Within her mind we get a brighter palette, more soft and warm hues. One key piece of information that comes from this small memory, apart from what they learn about Dr Poole, is that David doesn’t keep things from his past, meaning his interpretation of events must not often be challenged by facts or indisputable documents.

There are also two sub-plots within episode 4; one ties more into the overall story than the other, but both are clear seeds for future episodes. Firstly, one concerns Amy who is being held in a cell now. She’s being starved and is struggling to cope, though hasn’t lost her strength of will. Through her we learn that David used to imagine they had a dog, King the beagle, but that he was convinced the dog was real. Marvel theories might grab onto this, considering the comic character of The Shadow King, a psychic mutant who dwells within the astral plane and once battled David’s father, Professor Xavier, in his youth. Suspicion about who the yellow eyed man/monster in David’s mind abound and this could equally be a red herring by the creators.

The second sub-plot concerns Dr Bird and a mysterious man in a diving costume. This will almost certainly be important to the next episode, though it’s impossible to say with Legion when we’ll get a call-back. This is one of the other core pairings that give us more of the emotional side to the characters, showing Dr Bird in pain, hopeful and protective. The other main pairings are Sid and The Eye, and David and the mystery man in the ice room who seems to share, as he puts it, David’s “malady”.

Yet it’s really all about the last 15 minutes of this episode, which suggests we’re going to be out of memories and back into the real world for more of the story. Though, I’m sure we’ll be back in David’s mind in no time.