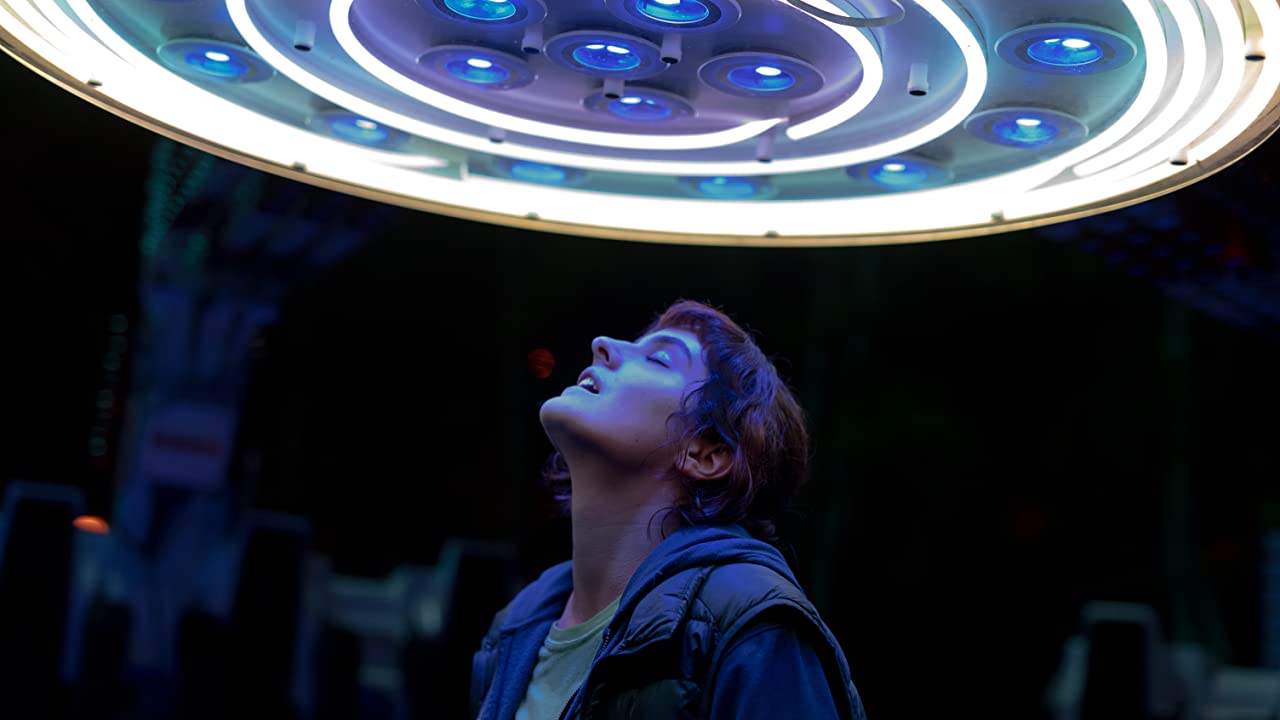 In Jumbo, a young woman named Jeanne (Noémi Merlant) falls in love with a fairground ride. And by love, I mean literal, romantic love. Sounds ridiculous, right? Well, the real magic of Jumbo is that, by the end of the movie, you sort of find yourself rooting for them…

Let’s back up a bit. When we first meet Jeanne, she’s starting her new job at the local fairground. We quickly learn that she’s shy, and achingly lonely – she lives with her mother Margarette (Emmanuelle Bercot), and the two are close, but very different types of people. There’s an implication Jeanne is neuroatypical, and life-of-the-party Margarette struggles to know how to help her unusual, closed-off daughter. When she’s not at work, Jeanne spends her time making working scale models of attractions at the park. Her new boss Marc (Bastien Bouillon) finds both them and her fascinating, but she does not return his interest.

When she meets Jumbo though, it’s love at first sight. She struggles to tear herself away from the striking machine, even heading back to the park in the middle of the night to spend more time with it. Soon however, news of Jeanne’s infatuation gets out, and she finds herself the subject of a mixture of concern and mockery. All she wants is to be with Jumbo, but the world is determined to get in the way.

To filmmaker Zoé Wittock’s infinite credit, there’s not a hint of derision in her sensitive, empathetic direction. She shoots Jumbothe way you’d shoot any love story – there’s the rapturous romance of the early days, the torturous separation, the gleeful reuniting. Even the scene where Jeanne ‘consummates’ their relationship (there’s a lot of oil…) isn’t hugely dissimilar to a conventional sex scene. As much as possible, Wittock is determined to get us to buy in to this most unusual of conceits, and – with tremendous help from Merlant’s brave, committed lead turn – she succeeds. It’s semi-miraculous, especially for a debut feature.

Still, the real emotional heft of Jumbo is not the relationship between Jeanne and the titular machine, but between Jeanne and her mother. Though she loves her, Margarette finds her daughter a singularly confusing being. She feels frustrated at her inability to understand her, and that frustration is exacerbated by Jeanne’s declaration that she has fallen for a fairground ride. For a while, it looks like it’s going to be the final fracture in an already fragile mother-daughter bond.

But then Wittock’s movie proves itself to be just as concerned with familial love as it is romantic. With some gentle nudging from her unexpectedly sensitive new boyfriend (a lovely performance from Sam Louwyck), she comes to a position of greater understanding towards her unorthodox child; or at least, a willingness to try to understand. Sometimes loving someone means trusting that they know what will make them happy, even if it seems weird to you. A sweet embrace of unconventionality from a sweetly unconventional film.