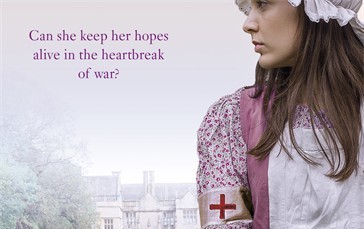 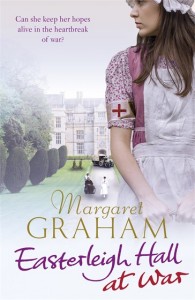 Where Easterleigh Hall portrayed a community on the brink of change, Easterleigh Hall at War is the story of a world amidst out-and-out devastation – war has caught up to the inhabitants of Easterleigh Hall, and with it brought a sequel that surprised me with its quiet intensity.

I wasn’t expecting this novel to impress me as much as it did. Between the struggle of getting into the first book and the blurb of this second one promising more of the same, I’ll admit I was ready to be disappointed. Happily, I wasn’t and in large part that was due to Margaret Graham’s well-researched plot.

Beginning on Christmas Day 1914, Easterleigh Hall at War embarks on a five-year journey through Hell and back as each character has their own role to play in the war effort. In England, Easterleigh Hall has been turned into an auxiliary hospital where our heroine Evie Forbes is determined to make sure that everyone is always provided for in spite of the fact that money is tight and supplies are growing sparse.

In war-torn Europe, the men on the front line – Evie’s brother Jack, fiancé Simon and their Captain Auberon, son of Easterleigh Hall’s owner Lord Brampton – face unspeakable horrors, but remain committed to doing their bit for their country as they fight to return home.

War is a great equaliser, and this novel sees a world that began with the lines of class firmly in place break down in light of the destruction all around them. Of course, tensions still exist and Graham makes sure to highlight that people’s experience of the war could – and did – depend on their status in society at times. But among our core group of characters this situation is one to be challenged, not enforced and Graham’s exploration of this is handled elegantly while crucially being able to maintain its believability.

It was nice to see the personalities that brought these characters to life in the first novel weren’t forgotten as we continue with their stories. Evie remains as kind-hearted and determined as ever while Jack continues to rally against unjust treatment in all its forms.

The most gratifying aspect of the novel, however, is the concluding pay-off as all the threads of the story interweave and come together. Auberon in particular is a character you root for and his arc was ultimately the one I found myself looking forward to reading the most.

Easterleigh Hall at War is not a grand novel looking to break new ground in the portrayal of the War in fiction – it moves quickly, jumps weeks of time over the course of a paragraph and yes, can still take a little too much time setting the scene in places. But what it does well is explore characters and relationships in impossible circumstances, and realise how these experiences can provoke change, good or bad.