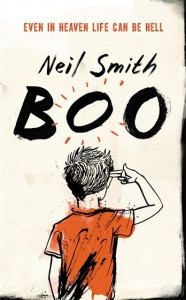 What kind of toothpaste do angels use in heaven? Where do we go when we die? And what do you do if you find out the person that murdered you is in heaven right alongside you? These are the questions facing Oliver Dalrymple – Boo to his classmates, thanks to his pale skin – when he wakes up in heaven after dying of a heart defect at school (he thinks).

On the surface of it, Boo by Neil Smith doesn’t seem like the cheeriest of novels but this one may just surprise you. What sounds like quite an ambitious premise actually becomes a heartwarming story about reconciliation and acceptance, all fronted by an endearing narrator who really holds the book together.

It’s an odd world that Smith has created here. When Boo wakes up, he finds himself in an area of the afterlife reserved for thirteen-year-olds who died in America. No one ages (but if you’re lucky you may get wiser) and you stay here for another 50 years before you re-die – and no one knows what happens after that. A few weeks after he is reborn, Boo’s classmate Johnny also arrives and reveals that he didn’t die of a hole in the heart after all – he was murdered, they both were, and the murderer may be here with them.

What develops is a strange friendship, but one that Boo desperately needs. During his time on earth, Boo didn’t really know how to fit in with his classmates but in heaven, with Johnny by his side, he begins to make peace with who he used to be and who he is now. Their quest to find out the truth about their death raises more questions than it answers and the resulting mystery is both highly original and utterly unpredictable and builds towards an unforgettable conclusion.

As interesting as Smith’s world is, it’s Boo that sells the story. He’s an odd, geeky thirteen-year-old who’s wise beyond his years, very practical and completely charming. Boo is truly his story and being able to see him grow up, make hard choices and finally fit in is a real pleasure to read.

This novel has been described as haunting, moving and profound and it is very hard to disagree with that. Once you get past the initial, admittedly off-putting, concept, Boo is a charming novel that takes a devastating event and turns it into a memorable and thought-provoking journey towards forgiveness, understanding and friendship.