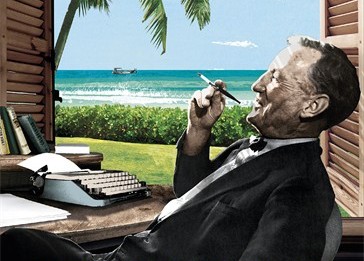 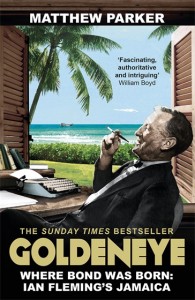 Ian Fleming’s James Bond is one of the best-known characters in literary history, but what do we know of Fleming as an author? What inspired his stories and the protagonist in these adventurous spy tales? Matthew Parker’s latest book, Goldeneye: Where Bond Was Born: Ian Fleming’s Jamaica, is a fascinating insight into the man, the author and Jamaica, the major inspiration for 007.

While Goldeneye is the ideal book for fans of Fleming’s fictitious stories, and indeed the films too, it’s also a fascinating look at Jamaica in the forties, fifties and sixties, regardless of whether you’ve read the Bond stories or not. It chronicles the author’s early life in England, his days in Jamaica – both as a bachelor and a married man – and the legacy he left behind after his death.

Fleming was a man who made an impression (both good and bad) on those he met, and it’s the descriptions of his charming yet aloof personality and his feelings towards Jamaica – backed up by personal accounts from those who knew him – that prove to be one of the most interesting parts of Goldeneye.

Fleming lived in a time when high-profile affairs were the norm amongst the upper crust set, and his liaisons with affluent women were surely an inspiration for charmer James Bond. In many ways, Fleming’s stance towards women and nature (Fleming loved wildlife and Bond would never harm an animal unless it was a necessity) parallels his protagonist’s.

Parker’s book isn’t just about Fleming’s personal life though. It’s about Goldeneye, his by-the-sea estate in Jamaica and the namesake for the seventeenth James Bond film. Parker describes the place, its people and politics with such vivid detail that it feels as if it could be a work of fiction. This Jamaica – in particular the attitudes of the rich and famous who frequented it in Fleming’s time, many of whom he called his friends – feels so different to the world as it is now.

Jamaica had such a huge impact on Fleming. The stories we know and love today wouldn’t have been written (or would have been very different) had Fleming not experienced the Caribbean island. As someone who doesn’t know much about Jamaica or its history, it was fascinating to read about the tropical island life, with its beautiful birds and colourful flora. More than anything, it was intriguing to see how the place had such an impression on Fleming as an author.

Near to the beginning of the book, Parker writes: ‘One of the great attractions of the Bond stories is that Fleming takes his readers to faraway locations, which in the days before cheap air travel were beyond the reach of most’. Parker also takes his readers to a faraway location, both in distance and time, which will always be beyond the reach of most. Fleming’s Jamaica remains something only found in books, and Parker gives a nostalgic glimpse into the author’s affluent and inspirational world.

The Day Before The Fire – Miranda France Review