Shady Hollow takes place in a charming community made up of woodland creatures who all live together in relative harmony. Life carries on quite as usual…until one of the members of the neighborhood is found floating belly up in the pond, quite dead. Yes, it’s a murder mystery featuring animals.

As writers, we’re always asked about where we got the idea for our Shady Hollow series, which makes sense because “Beatrix Potter + Agatha Christie = anthropomorphic animal murder mysteries” is perhaps not the most expected pairing. And we love telling people how the series came to be, since the origins tap into a deep and magical place: the bookshop.

It all began on a dark and stormy…scratch that, it wasn’t stormy. It was merely a quiet evening shift at Boswell Book Company, where we worked as booksellers. The owner dropped a box of toys on the desk so we could price them before they made their way to the children’s section. And what were these toys? Finger puppets in the shape of various animals, from bears to sheep to foxes to pandas. It being a slow night, we of course started playing with the puppets (we took our jobs as indie booksellers seriously, you can tell).

Sharon held up a little white mouse puppet and said, “If this mouse had a name, it would be Howard Chitters.” To which Jocelyn replied without missing a beat, “I bet he’s an accountant.” The naming of several other characters proceeded at a caffeine-fueled pace, and soon we had several characters in search of a setting. Luckily, we both fancied ourselves writers and National Novel Writing Month (NaNoWriMo) was fast approaching, so it felt natural to take the plunge and write about our little animal friends in the form of a novel.

We chose mystery as our genre not because either of us had experience writing mystery (Jocelyn wrote romance, and Sharon wrote fiction), but merely because as readers we had a deep love of Sherlock Holmes, Hercule Poirot, and the grand tradition of the amateur detective. Shady Hollow grew up around us as we frantically wrote the first draft in November. We need a place for the characters to meet up and talk! Quick, make up a coffeeshop run by a moose! We need our detective Vera to have an argument with her boss! Quick, put a skunk in charge of the newspaper and make him the most capitalist skunk you’ve ever met!

The first draft of Shady Hollow was a mess, as you’d expect of a novel whipped up in 30 days. But it was crammed with personality and characters and potential, mostly because we didn’t turn any ideas away (that’s what editing is for). If it sounded fun, we threw it in! And the fact that we worked as a team helped, because we could riff off each other and expand on an initial notion like actors on improv night. If we’d set out to build a mystery series, thinking deliberately and carefully considering the market…Shady Hollow never would have happened. We simply indulged in a whim, and didn’t worry about anything (definitely not spelling or continuity). We let the story grow according to whatever flowed into our heads, only steering it enough so we hit the most important points of the detective story plotline (Body? Check. Suspects? Check. Mystery solved at the end? 100%).

We believe that the appeal of Shady Hollow is its weirdness—the quirkiness of having a fox as a detective, a raven as her confidante, and a host of creatures who walk a delicate line between civilized and, well, human. As authors, we aim to entertain and offer an escape from dreary reality. We hope that our readers will come along for the ride, suspending disbelief in favour of delight. 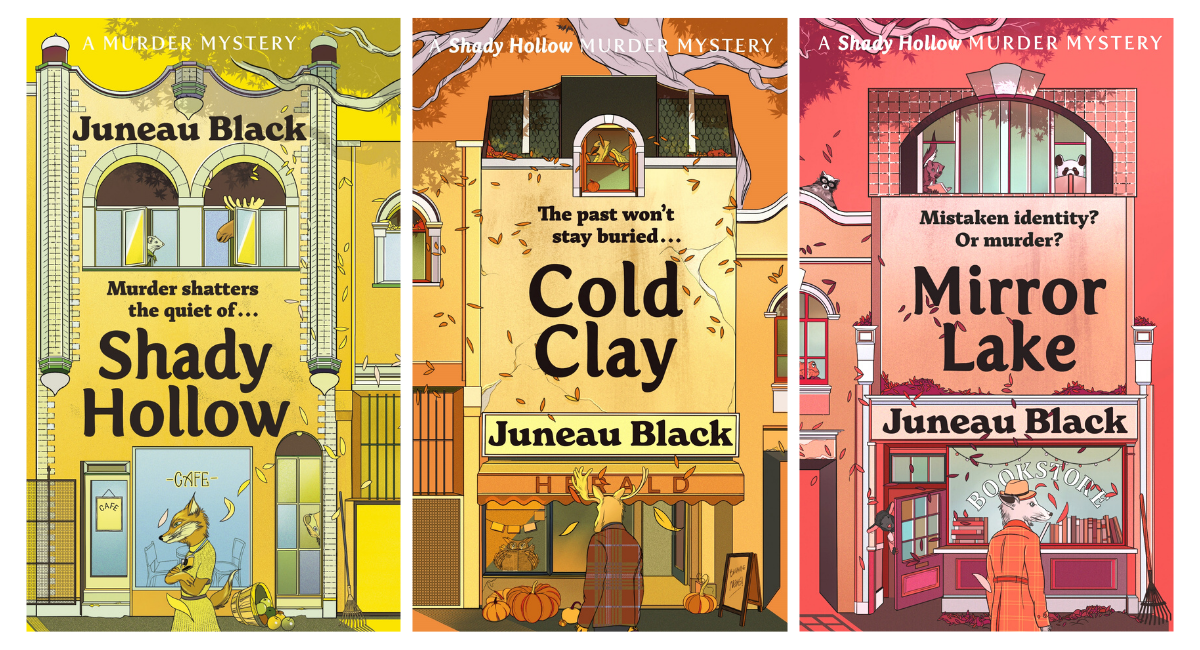 Shady Hollow and Cold Clay are out now, and Mirror Lake will be published by Hodder & Stoughton on 28 April 2022

Bio: Juneau Black is the pen name of authors Jocelyn Cole and Sharon Nagel. They share a love of excellent bookshops, fine cheeses, and a good murder (in fictional form only). Though they are two separate people, if you ask either of them a question about their childhood, you are likely to get the same answer. This is a little unnerving for any number of reasons.