Julie Houston on the inspiration behind A Village Secret

As we slowly emerge from our cosy winter hibernation, the uplifting feel of spring is ready and waiting to greet us, like an old friend who’s just returned after a long trip away. Colourful flowers scatter the ground, birds sing in the trees, and the days are becoming lighter and longer with each passing week.

With the brighter weather, we can finally swap curling up inside with a book and a blanket for reading outside in a warm yet shady spot. And we have a selection of unmissable books to recommend for your spring reading list, featuring everything from page-turning feminist tales and transportive fantasy, to heart-warming romance and keep-you-up-all-night mysteries. The only problem you’ll have is deciding which one to read first…

The School For Good Mothers by Jessamine Chan 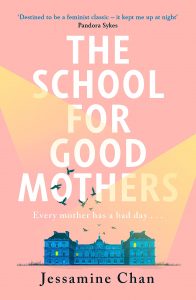 Frida Lui is exhausted, stressed and struggling, trying to juggle work with motherhood. When the state decides she’s not fit to care for her daughter, Frida is sent to an institution to be re-educated on how to be a good mother. If she can’t prove she can live up to their high standards, Frida faces losing her daughter forever. Drawing comparisons to Margaret Atwood, Kiley Reid and Kazuo Ishiguro, Jessamine Chan’s The School For Good Mothers is a perceptive, prescient and daring debut that presents a dystopia that doesn’t feel as far away as we’d like it to. (Hutchinson Heinemann)

The Lying Club by Annie Ward 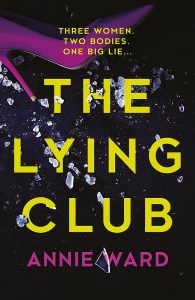 At an elite private school nestled in the Colorado mountains, three women find their fates bound by their relationships with the charming assistant athletics director, Nicholas. Office assistant Natalie, serial-cheating heiress Brooke, and overachieving, overprotective mother Asha couldn’t be more different, but when two bodies are carried out of the school early one morning, their jealousies, insecurities and rivalries rise to the surface. Annie Ward’s third novel is a twisty, slow-burning rollercoaster read of a thriller that pulls you into its secrets, lies and drama. (Quercus)

The Choice by S. J. Ford 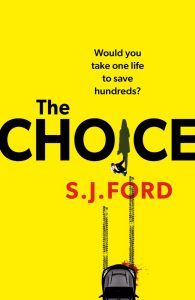 Jane Bell is a murderer. She aimed her car at a man, her neighbour to be precise, and drove straight towards him. With witnesses, CCTV footage and a signed confession, there’s no doubt surrounding Jane’s guilt. But she is also a hero. The man she killed was about to blow up a primary school. He intended to kill hundreds of children, Jane’s included. Now her fate is in the hands of a jury and everyone has their own thoughts on what happened. Told through the perspectives of several characters, The Choice explores the notion of good and bad, guilt and innocence, heroes and villains. It’s the ultimate moral dilemma story – one that will keep you hooked right up until its powerful end. (Head of Zeus) 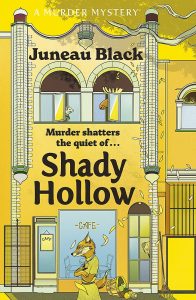 Billed as Agatha Christie meets Beatrix Potter, Shady Hollow follows a civilised woodland community that’s rocked by a village murder. Reporter Vera Vixen is determined to expose the lies and secrets being hidden by the seemingly peaceful neighbours. Sometimes you just need an entertaining, escapist read to while away the hours, and Juneau Black (the pen name of authors Jocelyn Cole and Sharon Nagel) certainly delivers all the small-town cosy crime vibes, with the animal quirkiness of Wes Anderson’s Fantastic Mr Fox. The second book in the series is out now and the third book will be published at the end of April – making this a perfect long weekend binge-read. (Hodder Paperbacks)

Nobody But Us by Laure Van Rensburg 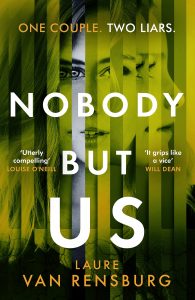 Wide-eyed NYU grad student Ellie and her well-respected professor boyfriend Steven are driving south from New York for their first holiday together. Three days in an isolated cabin, far from the city and the prying eyes of other students and teachers. It should be the perfect romantic chance for them to be alone. But when a snowstorm leaves them stranded, it soon becomes apparent that Steven isn’t who he says he is. But then again, neither is Ellie. Nobody But Us is a dark and atmospheric character-driven psychological thriller with a complex and clever couple at its core. If you like your stories with a heavy dose of revenge, you’ll love this. (Michael Joseph)

It Must Be Love by Caroline Khoury 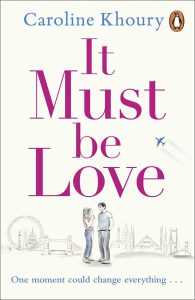 When Abbie and Oz met as young, idealistic students, their connection was unmistakable. But then Oz went home to Istanbul, and life moved on for both of them. Years later and Abbie is with the man she thinks she’s going to spend the rest of her life with, until a chance encounter throws her and Oz back into each other’s lives. Has too much time passed or does fate have other plans for their love story? Moving between the past and the present, and whisking readers to London and Istanbul, Paris and Beirut, Caroline Khoury’s debut is the kind of second-chance story that makes your heart burst for its characters. A lovely read. (Penguin) 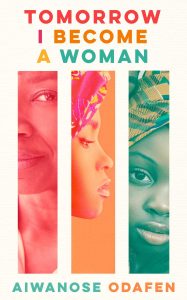 When Uju meets Gozie in 1978, he’s exactly the kind of man her mother would approve of: charismatic, handsome, Christian and – most importantly – Igbo. So when Gozie asks her to marry him within a few months of meeting, she says yes, despite her lingering feelings for Akin, a man from an opposing tribe her mother would never accept. But life doesn’t turn out as Uju thinks it will… Aiwanose Odafen’s debut centres on a woman wrestling with her own wants and desires, as well as the expectations of her family and society. Spanning decades and continents, it’s a raw and moving exploration of political turmoil, domestic abuse, complicated mother/daughter relationships, womanhood, and the restorative power of female friendship. (‎Scribner UK) 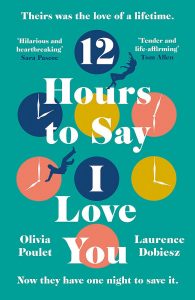 As Pippa lies in a hospital bed, unconscious after a serious traffic accident, her husband Steve sits by her bedside, wondering how they got to this moment. Where was Pippa going the night she crashed? And why was she so distracted behind the wheel? Steve doesn’t have the answers. All he knows is that Pippa is his entire world and he wasn’t there when she needed him most. For the next twelve hours, Steve tells his wife all the reasons he loves her, hoping she’ll find her way back to him. Written by real-life husband and wife co-authors Olivia Poulet & Laurence Dobiesz, this is a tender, poignant, unexpectedly funny and beautifully life-affirming tale about the highs and lows of life and love. (Headline Review)

The House of Sorrowing Stars by Beth Cartwright 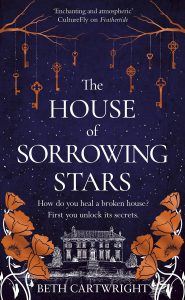 Sitting alone on an island surrounded by flowers is an old, faded house. Only those who are haunted by the memory of loss can visit, so when Liddy receives an invitation, she thinks there must be some mistake. She’s never experienced loss but she’s curious enough to accept. Once there, Liddy must find the root of the other occupants’ sorrow but the house won’t give up its secrets so easily. Blending enchanting magical realism and lyrical prose with an exploration of loss and grief, The House of Sorrowing Stars is a captivating, emotional tale from beginning to end. (Del Rey)

The Tea Ladies of St Jude’s Hospital by Joanna Nell 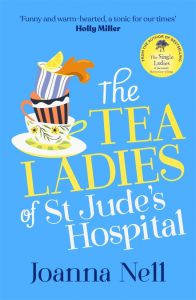 The Tea Ladies of St Jude’s Hospital follows three unlikely friends – stalwart Manageress Hilary, perpetually tardy recruit Joy, and seventeen-year-old volunteer Chloe – as they put aside their differences to save the hospital’s cafeteria from closure. If there’s one thing you can always look forward to when it comes to Joanna Nell’s novels, it’s a charming and heart-warming story with a cast of loveable characters. This book – Nell’s fourth – is exactly the kind of warm and wise story to brighten the gloomiest day. (Hodder & Stoughton)

Lessons In Chemistry by Bonnie Garmus 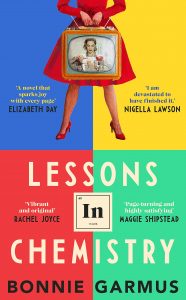 If you only read one book this Spring (though that kind of bookish behaviour is not easy to condone!), make it Bonnie Garmus’ unforgettable Lessons in Chemistry. Set against the backdrop of the 1960’s, the story follows smart and self-assured chemist Elizabeth Zott as she becomes the unlikely and reluctant star of the most beloved cooking show in America. But not everyone is happy with Zott’s ever-growing following. Because she’s not just teaching women how to cook. She’s showing them how to change a status quo that’s been favouring men for way too long. Elizabeth Zott is the character we all need in our lives right now – intelligent, fearless, determined and utterly inspiring. (Doubleday)

The Curfew by T. M. Logan 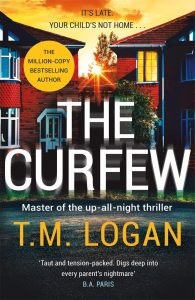 Andy and Laura are good parents. They’ve told their teenage son he can go out with his friends to celebrate completing his exams, but they must know where he is and he must be home by midnight. When Connor misses his curfew, the repercussions will change the lives of five families forever. Because five teenagers might have gone into the woods that night, but only four came out. Fast-paced and full of red herrings, The Curfew asks the question of just how far a parent is willing to go to protect their child. It’s not a short read but it’s testament to Logan’s expertly crafted writing that you’ll want to race through it in a single sitting anyway. (Zaffre)

It Ends At Midnight by Harriet Tyce 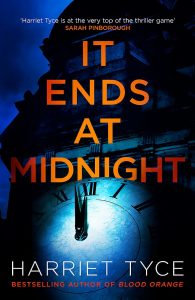 As midnight approaches on New Year’s Eve, a lavish party is taking place in one of Edinburgh’s best postcodes. But it quickly dissolves into chaos when two guests fall tragically from the roof, impaled on the cast iron railings below. Going back and forth in time as it leads up to the macabre events of the Hogmanay party, the story follows long-time friends Tess and Sylvie as they struggle with the secrets and guilt that’s plagued them for decades. They want to make things right before it’s too late, but not everyone is looking for a resolution – someone wants revenge. It Ends At Midnight is a searing and suspenseful psychological thriller full of tension, toxic friendship and uncomfortable truths. (Wildfire) 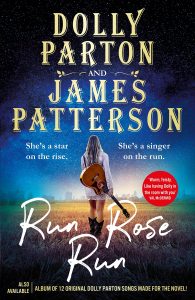 Released to coincide with an album of the same name featuring twelve original songs written, recorded and produced by Dolly Parton, Run Rose Run follows AnnieLee, a singer-songwriter star on the rise who’s chasing after her Nashville dreams, whilst the hard life she left behind continues to nip at her heels. Combine Dolly’s feisty spirit and country music background with Patterson’s innate ability to pen a gripping thriller, and you’ve got yourself a story that’s impossible to put down. This might not be the collaboration you knew you needed in your life, but from the moment you turn the final page, you’ll be yearning for more from this talented duo. (Century) 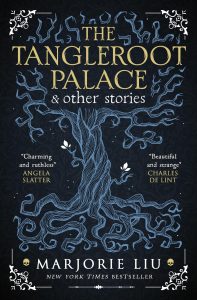 Dangerous magic and even more dangerous women are at the very heart of Marjorie Liu’s debut short story collection, which weaves spellbinding fantasy with themes of love, betrayal, freedom and family. Written over an eight-year period, whilst she was living in the centre of a forest in the Midwest, the stories feature warriors and witches, vampires and heroes, ordinary and not-so ordinary girls. The tales are enchanting, dark and hopeful, opening with a funeral and culminating in a novella about a princess fleeing an arranged marriage. A must-read if you enjoy evocative and intricate short fiction. (Titan Books)

Rachel Hancox on cooking up a novel

Julie Houston on the inspiration behind A Village Secret