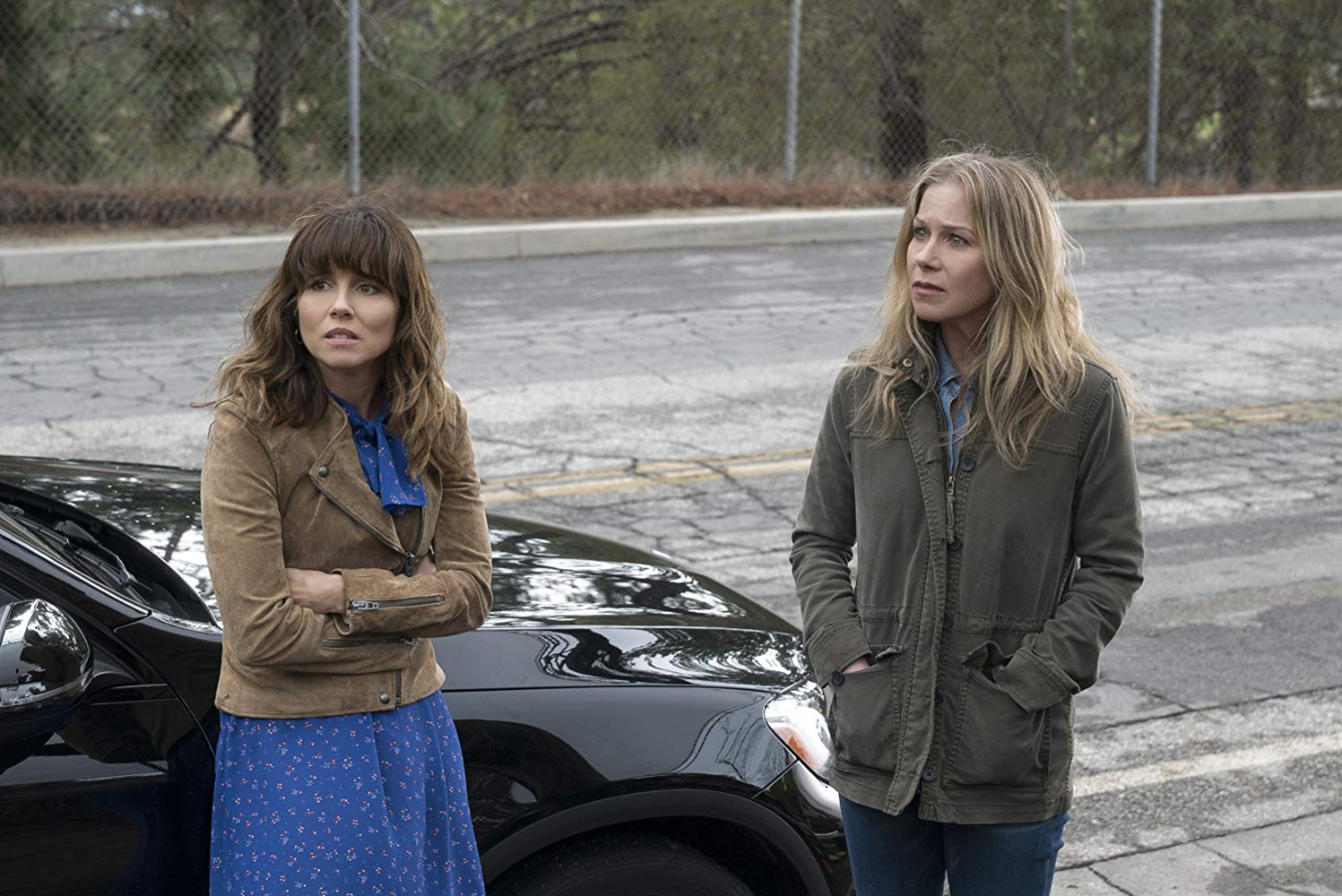 Dead to Me is a resonant, biting show with moments of pure joy that seamlessly segue into gut-wrenching pain. Loss is central to the show and that means that it will hit you more the deeper your understanding of loss is. It’s a dark comedy with a good dose of drama, centring on Jen and Judy, who meet at a grief counselling session and join forces to navigate grieving for those they have lost.

Christina Applegate and Linda Cardellini drive this show as the joint leads, Jen and Judy respectively, two women dealing with grief in different ways, who find a kinship in their shared situation. Cardellini’s Judy is an open book of emotions, which belays her ability to bury that which she feels at her core. In contrast, Applegate’s Jen covers any vulnerable emotions, preferring to bitterly lash out, in small and big ways, which can’t hide her sincerity.

The pilot episode captures the essence of this show and really is exemplary of not only the tone of Dead to Me but the power of the storytelling in this first season – which we can only hope continues in the greenlit second season.

We are first introduced to Jen and her barbs; she has a no nonsense attitude to dealing with those around her that borders on mean, but given her husband has just died it is understandable. She’s reserved, which is why Judy’s ability to break through to her at their first grief group meeting works so well. Judy ignores the front and continues to be warm without coddling Jen. This leads to the two sharing a late night chat over the phone where Jen finally gets to talk about her husband without feeling pitied. Yet we also see Jen’s softer side through her relationship with her children, and in one particularly affecting moment her youngest son does that thing that kids do so well and surprise you with their kindness and awareness. It’s chest-clutchingly sweet and sad. Applegate’s comedic skills are certainly on show here but it’s her more sombre, rageful, pain-fuelled moments that are truly excellent.

Judy has a laid-back innocence that makes her the perfect friend, and she has a shyness that perhaps would have been more pronounced in her youth, but as a grown woman, she’s tentative rather than quiet. Cardellini is known for her emotional depth and with Judy she showcases layers of feeling. Judy can be feigning happiness, with an undercurrent of fear and swathes of sadness and somehow you can see all that in her eyes. 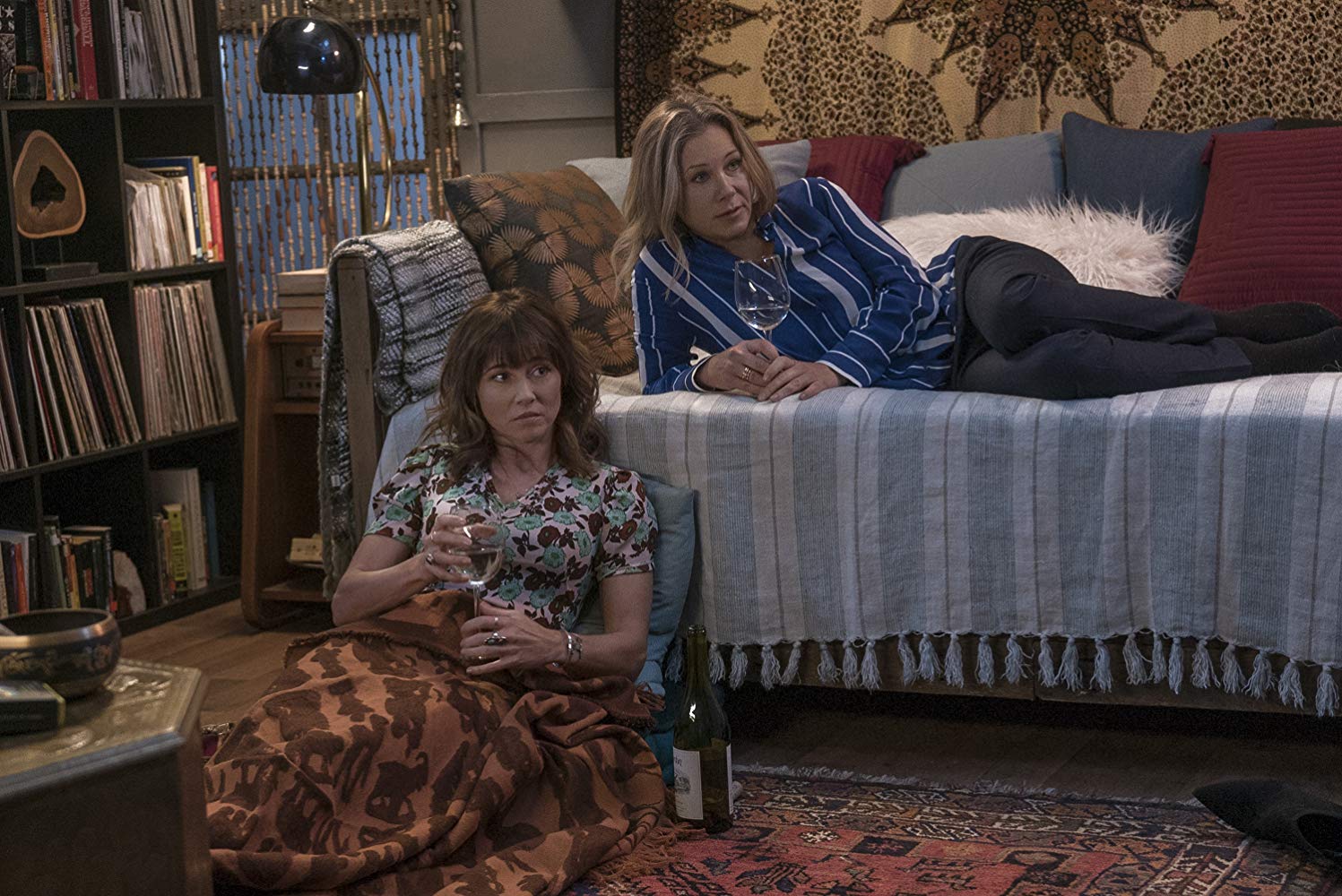 The supporting cast is well placed, fitting into the central story of Judy and Jen without taking over. James Marsden plays the most significant role as Judy’s ex boyfriend and we learn more about Judy through him. He’s wealthy, handsome and self-interested. He has the pleasantness and swagger of someone who doesn’t need to bother being unkind because he knows he has power. A familiar kind of good looking bad guy, but it doesn’t feel overdone.

There are a host of great supporting performances from Valerie Mahaffey, who is fabulous as Jen’s horrendous mother-in-law, Lorna, Max Jenkins, with a restrained campness as Jen’s business partner, Christopher, Diana Maria Riva as Ana, an unshakeable police detective searching for Jen’s husband’s killer, Brandon Scott as Nick, a cop that Judy meets on a grief retreat, and Keong Sim as Pastor Wayne, who portrays a humanity that grounds the show as much as it adds comedic touches with its seriousness.

Every episode in this ten episode first season is controlled and engaging, making it entirely bingeable. There’s a dark Desperate Housewives feel to this show. It’s less high octane drama and more a lingering look at loss, meaning the sadder parts are more painful and the laughs are actual howls. There are laugh out loud moments in Dead to Me, as well as ball your eyes out scenes. By the end you’re both relieved and exhausted. It’s an excellent first season and certainly rewatchable, once you’ve rehydrated.

Best TV shows of 2019: Fleabag, Chernobyl, On My Block and more