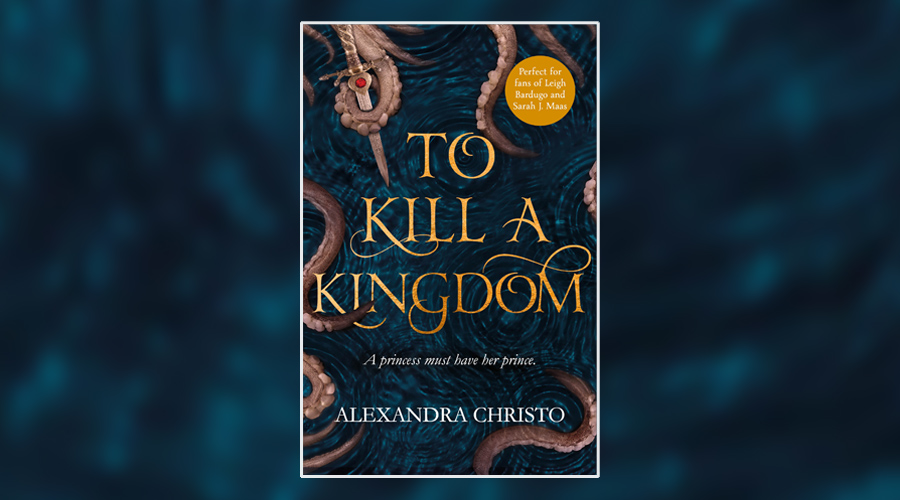 With sirens, sea witches, pirates and princes, Alexandra Christo’s To Kill a Kingdom is like a darker, more sinister, less Disney version of The Little Mermaid. It centres on a vicious undersea princess with a taste for regal blood and a seafaring royal on a mission to banish the sea of monstrous creatures once and for all. But what happens when these two mortal foes are unexpectedly thrust into each other’s lives?

Princess Lira is a siren – beautiful and deadly, successor to the throne and enemy of men. She’s been raised by the Sea Queen to be merciless, and her ferocity as the Princes’ Bane is legend both in the ocean and on land. Lira has a human heart for every year she’s been alive and she hides them in the sand of her bedroom. Whilst on a hunt with her cousin one day, she steals a heart early, incurring the brutal wrath of her mother. The Sea Queen lives for vengeance, and when Lira disappoints her a second time, she decides to teach the young princess a lesson, turning her into a human and stranding her in the middle of the ocean.

As the heir to the most powerful kingdom in the world, Prince Elian has spent his life running from his royal descent. He sails across the sea on his treasured ship, the Saad, with a pirate-like crew who would lay their lives on the line to protect his. They spend their days hunting sirens, a task that Elian doesn’t relish but sees as necessary in ridding the world of evil. When he rescues a drowning girl from the sea, he has no idea she is the deadly princess he’s been pursuing, though he knows there’s something not quite right about her.

Lira and Elian are both seeking the same thing: a key with the power to destroy sirenkind for good, or in Lira’s case, the key to stealing power from her mother. With her ulterior motive, Lira promises to help Elian find the elusive object, with the intention of taking it – and his heart – as soon as she has the opportunity. What Lira doesn’t bank on is her own heart being stolen first, or finding a rare camaraderie with the crew of the Saad.

“In the pits of our souls – if I amuse myself with the notion that I have a soul – Elian and I aren’t so different. Two kingdoms that come with responsibilities we each have trouble bearing. Him, the shackles of being pinned to one land and one life. Me, trapped in the confines of my mother’s murderous legacy. And the ocean, calling out to us both. A song of freedom and longing.”

So many fantasy books feature fierce and physically tough heroines, but Christo breaks the mould by creating an all-powerful protagonist in Lira, and then immediately taking that power and strength away. For a character who’s always relied on her physical force and speed, she’s suddenly vulnerable and has to adapt to her surroundings. Lira still has the ability to think fast, and it’s her sharp tongue that sparks Elian’s interest. To Kill a Kingdom is her journey to discovering that she doesn’t need to be able to rip hearts from people’s chests to be strong and break free from her mother’s murderous hold.

There’s so much action and piratical happenings in this story that you’ll frequently need to pause to take a breath, and that’s what makes To Kill a Kingdom such a pacey and absorbing read. It doesn’t dwell on characters’ motivations through exposition heavy dialogue, but shows who these characters are and what they want through their actions; how they treat those around them and what they’re willing to sacrifice to change the world.

Some YA books promise sequels when they don’t really need them, but To Kill a Kingdom is full of characters I’d willingly keep reading about. Both Lira and Elian are endearing protagonists for different reasons; Lira for her sharpness and cynicism, Elian for his warm nature and fair-mindedness. If you love strong heroes and heroines, and have yet to discover the dark and dangerous delights of this book, you’re missing out.

Book Review: Into The Crooked Place by Alexandra Christo