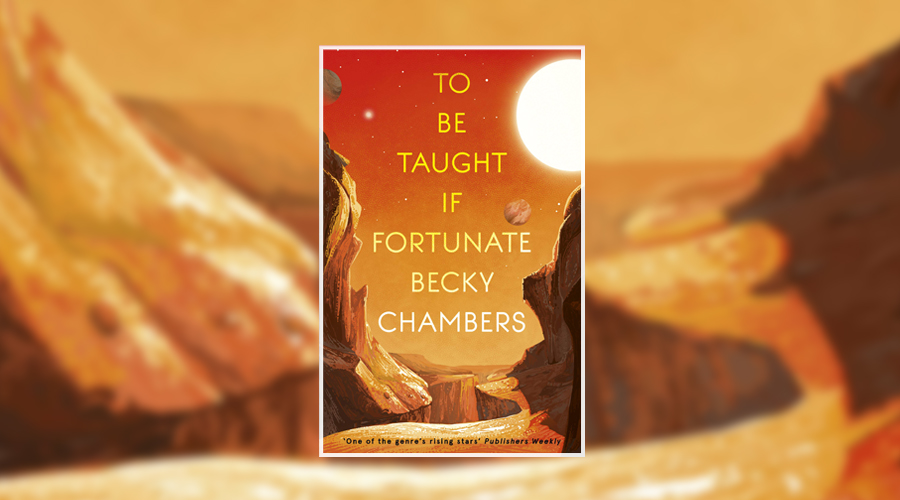 Becky Chambers’ To Be Taught, If Fortunate only has 160 pages, yet this high-concept sci-fi novella has more depth, meaning and intelligence than many of the full-length tomes populating bookshops. Set in the future, at the turn of the 22nd century, it follows a quartet of explorers sent into space to conduct ecological surveys of habitable worlds light-years from Earth.

Flight engineer Ariadne is one of the four explorers and our sole perspective into this space-set universe. She and her fellow crewmates sleep during transit and when they wake, they’ve shifted in form to adapt to the specific environment of the new, unexplored planet. This is unequivocally not a terraforming mission. The crew are tasked with collecting data and leaving as little trace of their existence on each planet as possible.

As the years pass by and the explorers travel between four very different planets, Ariadne chronicles their journey through time, space and and form, marvelling over the wonders they witness and musing about the dangers – both expected and unforeseen – of their mission. When the outcome of their assignment becomes less certain, the crew must continue on their journey, not knowing if anyone at home is still listening.

Set in four parts, one for each of the planets the crew visit, To Be Taught, If Fortunate is a thought-provoking sci-fi tale that explores humanity’s insatiable desire for space adventure. There’s an awe-inspiring sense of curiosity running through the novel, as the crew survey new landscapes and stumble upon weird and wonderful life forms. Their excitement and inquisitiveness on the first two planets is infectious but it’s on the third planet, Opera, that the story takes a more melancholy turn. It’s here, when things don’t go to plan, that the crew’s emotions are overwhelmingly palpable.

Chambers is such a gifted writer that you feel involved in her characters’ plight from the moment the story begins. She understands space, detailing the intricacies of interstellar travel, whilst at the same time never forgetting that her characters are still human and subject to the impulses and emotions, the hopes and fears, that we all have. So many books are about mankind wanting to conquer. It’s rare for a story to feature characters that care more about the planet itself than what they can gain from it.

It’s also rare for a cast of characters to get on so well. Ariadne loves her three crewmates and they love her back. They’re friends, family, co-workers and lovers. With only four of them, they’re everything to each other. There’s no resentment, jealousy, animosity or fight for control. They’re a crew of equals in every sense of the word and it’s refreshing to read about a team of people so perfectly in sync. That doesn’t mean they don’t struggle internally though, and Ariadne’s perspective reveals the psychological toll the mission takes on each of the crew, herself included.

There’s a quiet beauty to Chambers’ writing that envelops you in her story and holds you tight until the very end. Proof that a novel doesn’t have to have hundreds of pages to be impressive.

To Be Taught, If Fortunate is published by Hodder & Stoughton on 8 August 2019

Book Review: The Girl At The Window by Rowan Coleman