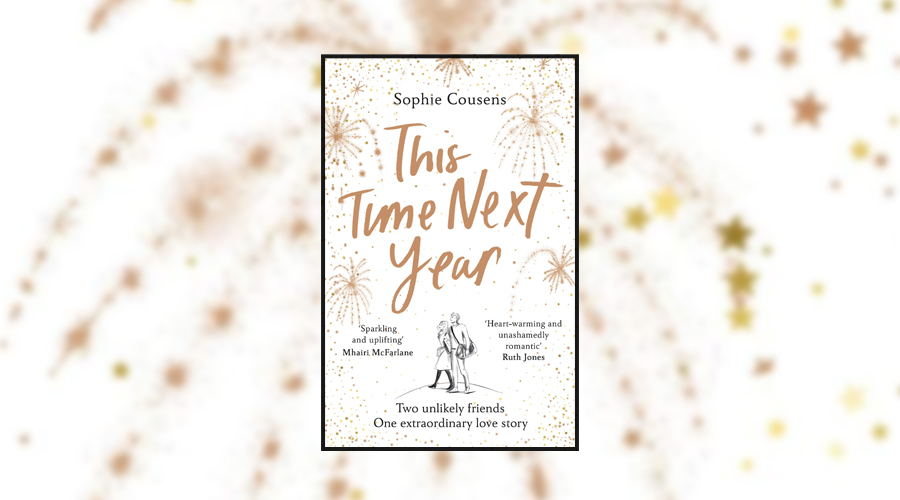 There’s nothing like a good, romantic read to make the world disappear for a while, and Sophie Cousens’ new novel is definitely one story that does just that and more. Going beyond its initial romantic premise, This Time Next Year documents a pivotal year in its protagonist’s life, following Minnie as she learns how to make her own luck in the world, while sharing more than a few electric run-ins with her love interest along the way too. The result is a mature novel that’s equal parts funny, uplifting and heartfelt – not to mention one that feels as though it has come along at exactly the right moment, providing readers with a perfect dose of escapism and a much-needed reprieve from the world around them.

The story centres on Minnie and Quinn, who were born on the same day at the same hospital, with their two expectant mothers bonding in the labour ward as excitement builds over who will be the first baby born on January 1, 1990. When Quinn was born just one minute before Minnie, he not only won the £50,000 prize money but was given the name that had been meant for Minnie too, and with it got all of the luck that Minnie has been missing throughout her life.

When the pair meet at a New Year’s Eve party 30 years later, it’s clear that struggling business-owner Minnie and rich, city boy Quinn have absolutely nothing in common beyond the coincidence of their birth. But the duo’s lives have been circling each other’s for longer than they’ve known, and soon they end up bumping into each other again and again, despite their vastly different worlds. With each new meeting and different encounter, Minnie and Quinn seem to help each other push their lives in the right direction and it begins to feel like fate is working to bring them together – and maybe, just maybe, fate is encouraging the both of them to take a chance on love too.

“Minnie never imagined she would ever meet this man. Sometimes she even wondered if the fable was real […] And yet here he was, all six-foot-something of him, sitting next to her on the floor, his warm, handsome face smiling at her as though they were old friends.”

While This Time Next Year is undoubtedly a love story, to say that’s all it is would be doing it a great disservice. There’s no denying that Minnie and Quinn’s developing relationship is a major narrative push here – both through the chronological, present-day narrative and the flashbacks to New Year’s Eves gone by in the years before the duo officially met – and it’s a relationship that’s always fizzing with anticipation too, with a palpable chemistry between the pair that makes all of their interactions a delight to read as the will-they-wont-they, push-and-pull of their connection plays out. What makes this novel truly gratifying, however, is that the romance isn’t the be all and end all of Minnie’s story.

When we first meet Minnie, she’s wholly caught up in the idea of her New Year’s jinx, convincing herself that anything that can go wrong will always go wrong and having long held the belief that it’s futile to expect otherwise. Between a struggling business with growing financial concerns, a dismissive boyfriend who doesn’t put her first and a best friend who’s burning herself out trying to keep the business ticking over, Minnie starts her 30s in a low place, lacking both self-esteem and confidence in herself and her ideas. But over the course of the novel, Minnie begins to realise the importance of putting herself first – and while she gets a few nudges from Quinn, best friend Leyla and others along the way, this book was at its most heartening when Minnie began championing herself in every aspect of her life.

Minnie’s journey is ultimately a gratifying one, but with the early chapters focusing so much on the character’s woeful, pessimistic tendencies, it did take a while for Minnie to endear herself to me. Unfortunately, this also meant that the book itself also struggled to find its stride, muddling through a number of flashbacks and incremental jumps in time through the first few chapters as it established the setting, the characters and their history. Some of the side characters, too, did feel a little glossed over, resulting in a turnabout from one character that felt a little jarring, given the changes came with so few hints or warning. However, once the story did get confidently underway, This Time Next Year soon became a gem of a novel with a strong cast of characters in Minnie, Quinn and Leyla in particular, and relationships to root for throughout.

This Time Next Year is a romantic story, but it’s also a book about family, friendships, luck, fate and finding your own way in life, and Cousens does an excellent job of balancing each of these elements in a wonderful, uplifting package. With an easy narrative pace, smart dialogue and some endlessly relatable moments throughout, this novel offers up everything from romance to humour and it’s not afraid to dig deep into its characters’ emotions or the issues and challenges they face either. This is a book that’s smart, warm and completely engaging, and it doesn’t take long for it to become clear that This Time Next Year is a book that many readers will happily allow themselves to get lost in.