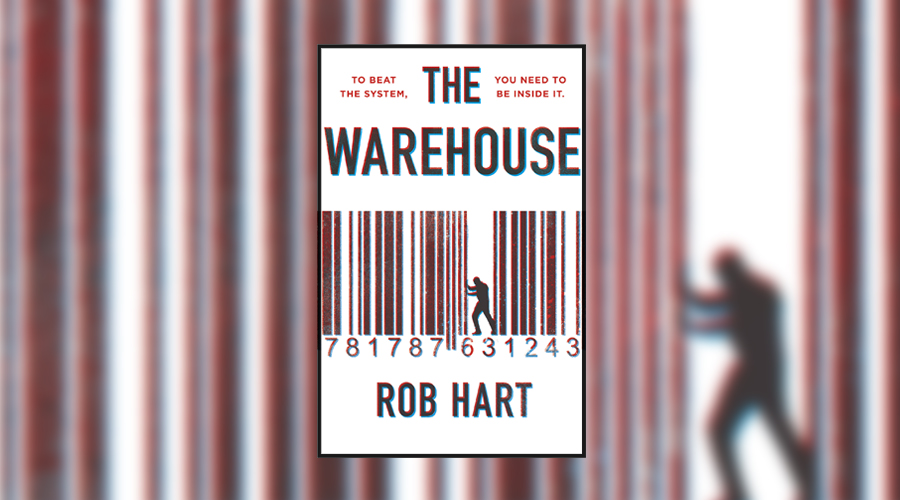 Rob Hart’s first standalone novel The Warehouse is a scarily plausible thriller set in a technologically advanced near-future. America has succumbed to mass consumerism. Violence, poverty, unemployment and climate change have ravaged society and the country is dominated by an online retail giant called Cloud. Helmed by billionaire Gibson Wells, Cloud offers people a live-work environment that promises a better life. Work hard and you’ll be rewarded. Yet Cloud is more chilling dystopia than the Earth-saving utopia it claims to be.

Ex-prison guard Paxton needs a job. His entrepreneurial dreams have been crushed and he has no other option than to seek employment at the same company that undercut his business and ruined his life. Moving into the sprawling corporate facility, he’s assigned a security role, quickly falling into the regimented, convenient rhythm of life at Cloud. For the first time in a long time, Paxton allows himself to feel hopeful about the future, a feeling that flourishes when he meets fellow newcomer Zinnia, a picker responsible for moving goods around the warehouse.

Zinnia is much more than she seems. She wanted a job in tech, maintenance or security but Cloud’s job placement algorithm put a spanner in the works by giving her a low level position that barely allows its workers to pause for breath during a shift. With every employee required to wear a Cloudband, a watch that opens doors, processes transactions and tracks user data, Zinnia doesn’t have the security credentials to fulfil her true agenda. Paxton is her all-access meal ticket, if only she can find a way to secretly use him and move around the panopticon without being detected.

Alternating between Paxton and Zinnia’s perspectives, the story also gives glimpses into the mind of Cloud’s billionaire founder through personal blog posts that reveal he’s dying. With just one year to live, Gibson is embarking on one last tour of his Cloud facilities, and he uses the blog to reflect on how his company started and grew to reign supreme. He’s due to announce his successor and will be making a trip to the facility Paxton and Zinnia work at, throwing all three characters on a collision course that threatens Paxton’s happy future and Zinnia’s clandestine mission.

It’s not difficult to see why The Warehouse captured the attention of both publishers and film companies, who’ve already snapped up the rights and bagged Ron Howard as director. This is the kind of high-concept dystopian thriller that cinema was made for – a story that’s both clever, tense and exciting, with a central duo worth rooting for. Yet there’s a deeper layer to Hart’s tale, one that shines a harsh spotlight on the economic empathy gap and our own day-to-day complicity in cheap consumerism over basic humanity. Highlighting companies like Apple and Verizon, Hart explains that it’s “about the way corporations treat us like disposable products. But more than that, it’s about how we’ve decided our own comfort is worth someone else’s discomfort.”

Similar to the powerful tech company in Dave Eggers’ The Circle, Cloud portrays itself as a philanthropic and sophisticated saviour to the world. It’s an illusion that even cynical, realistic people like Paxton and Zinnia, who know better, have to fight against getting sucked into. The reality is much more sinister; a cautionary tale that we should all take heed of.

The Warehouse is a thriller for the modern age, one that entertains as much as it encourages us to take a long, hard look at the way our world is going and the corporations we choose to put our trust in.

The Warehouse is published by Bantam Press on 13 August 2019