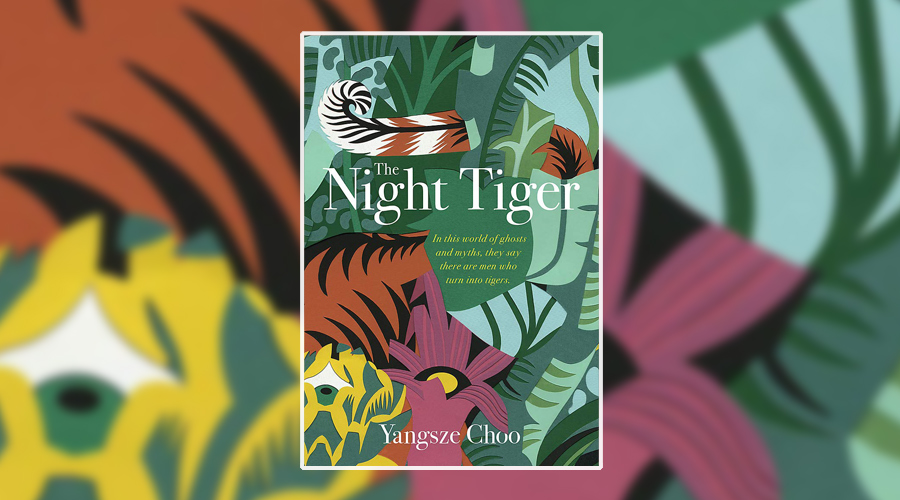 Just one look at the beautiful, exotic and verdant cover of The Night Tiger and you know you’re in for a treat. Yangsze Choo’s magical story takes place in 1930’s colonial Malaya as multiple characters are brought together by a series of unexplained deaths, Chinese superstitions and strange coincidences. Rumours of men who turn into tigers sweep through the district and severed fingers pass from hand to hand, blurring the lines of myth and rumour, folklore and reality.

Ji Lin and Ren are our two main perspectives, and though they’ve never met, there’s something that tethers these strangers; an unseen thread that draws them together, the air tingling with energy whenever they’re near to each other. Ji Lin is an intelligent, quick-witted apprentice dressmaker who moonlights as a dancehall girl to pay for her mother’s gambling debts so that her hot-tempered stepfather won’t find out. She’s exhausted by the male oriented world she lives in and has accepted that she’ll never get married. She’s also jealous of her stepbrother, Shin, who left home to study medicine – something Ji Lin dreamt of doing – and left her behind in the process.

Ren is an orphan houseboy who starts working for a British doctor after his old employer, the eccentric Dr MacFarlane, passed away. Before MacFarlane died, he entrusted Ren with a task – to retrieve the severed finger he lost in an accident, return it to his body and bury it in his grave. If Ren doesn’t do this within forty-nine days, MacFarlane’s soul won’t be able to rest in peace and will roam the earth forever. So the young boy, still mourning the death of his master and friend, as well as his twin brother years ago, sets out to find the mummified finger that’s mysteriously gone missing.

When one of Ji Lin’s dance partners unintentionally leaves her with a gruesome souvenir, the very finger that Ren is searching for, she’s taken down a dark trail – one that intertwines their respective paths. The sweeping tale that unfolds is one of servants and masters, of siblings lost and found, of unexpected love and unconditional devotion. It’s also a story of ambition, fear and superstition, and what those powerful desires, emotions and beliefs force people to do.

Yangsze Choo has crafted a captivating tale full of lush, sumptuous imagery and curious Malaysian folklore. It’s richly detailed and beautifully written with an intriguing mystery tying the intricate threads together. But what’s so charming about The Night Tiger, aside from the whimsical mythology woven through every chapter, are the characters – from unassuming and bright-eyed Ren to loyal but lonely Ji Lin to the handsome and tender-hearted Shin. These characters make this book what it is: a gorgeous, unusual and enchanting story that you never want to end.

The evolving relationship between Ji Lin and Shin is an affectionate, subtle romance that takes the two characters by surprise, even though their fondness for each other is obvious to the reader from the start. Ji Lin’s confusion at the feelings she’s having for Shin, her stepbrother, is palpable; so too is Shin’s jealousy whenever any male shows Ji Lin the slightest hint of attention. Yet it always feels as if they were the two destined to be together, rather than their parents.

Choo explores colonialism and western influences on Chinese culture; the contrast between the simple villagers with their long-held, ancient superstitions and the British upper crust, living in their sprawling estates with their native help. With talk of man-eating weretigers and souls roaming the earth, this fascinating historical element helps to keep the story and its characters grounded in reality.

The Night Tiger is a multi-layered and vibrant page-turner that has everything a brilliant historical novel needs: Love, death, mystery, magical realism and an atmospheric setting that’s at once alluring and peculiar, romantic and dangerous. Journey into Choo’s unique world and you won’t regret it.

The Night Tiger was published by Quercus on 12 February 2019