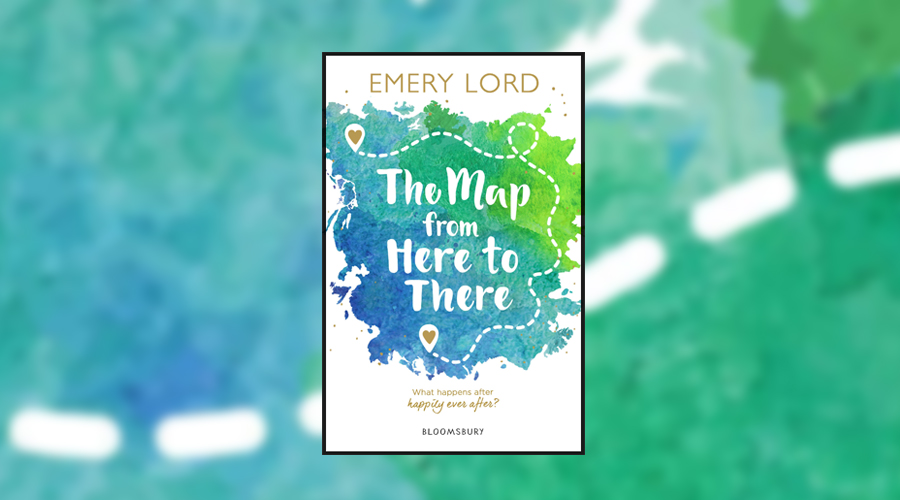 Every now and then a book comes along that just feels important, like something you wish had been around for you when you needed it. To me, Emery Lord’s The Map from Here to There is one such book. This novel is a nonstop swirl of emotions, perfectly encapsulating the exciting (and simultaneously terrifying) experience of your final year at school, a time when you’re making the kind of decisions that have the potential to shape the rest of your life. But despite the heavy subject matter, Lord infuses this story with the kind of warmth that makes picking up this book feel like catching up with an old friend – albeit, one who’s a bit frustrating at times.

The Map from Here to There picks up almost immediately after book one, The Start of Me and You, with Paige Hancock enjoying the last of her summer before senior year starts by working in a cinema, hanging out with her friends and counting down the days until her boyfriend Max returns from his summer in Italy. But as the school year draws closer, Paige is quickly weighed down by the big decisions she has ahead of her and her anxiety begins to feed into every choice she faces. As her friends, family and boyfriend each begin to make the decisions that will set up the next stage of their lives, Paige is left worried about what the future holds for herself and those she loves.

“I was beginning to think that half of growing up was figuring out when to let go and when to hold on. The radio implored me to say yes; one of my favourite TV show creators wrote a whole book about the practice of saying yes; improv class at NYU taught me yes, and. But saying yes meant saying no to other things, didn’t it?”

While The Start of Me and You was fundamentally a romance novel, The Map from Here to There is a lot harder to categorise so singularly. There’s romance here, yes, but it operates in shades of grey in that Paige and Max are together, but at times they struggle to reconcile the idea of their relationship with the actuality of it, and this novel charts all of the second-guessing and insecurities with as much gusto as it focuses in on the attraction between the pair, who still have the same electric connection as they did when we first met them. It does mean that this book lacks some of the swoon-worthy excitement of the will-they-wont-they romance plot of the first book, but Paige is a realist, which means this follow-up quickly delves into what comes after the happy ever after and in doing so it tells the kind of story that is usually left untold.

Of course, whether or not you believe Paige and Max’s story needed revisiting is another matter entirely, but the very fact that Lord decided to explore their relationship beyond the realisations and the grand gestures that wrapped up book one means that there’s no denying that The Map from Here to There is one of the most authentic YA novels out there right now. Paige is a textbook over-thinker, and it’s hard not to relate to her on some level at some point in this book as she stresses over college applications, the likelihood of her relationship lasting and whether she’s making the right decisions for her own future. It can make for stressful and frustrating reading at times, as Paige’s brain keeps circling back to worst case scenarios, but there’s a real sense that Paige, like so many of us, struggles to reconcile what it is she can and can’t control – which also means that the growth that she shows throughout this book feels entirely natural and honest, giving readers a satisfying ending even if it doesn’t necessarily tie everything up in a neat bow.

But for all the stress and confusion that will feel so familiar to so many of us and may not feel like easy reading, there are many more things to enjoy in this book too – not least in the relationship between Paige and her three closest friends, Tessa, Morgan and Kayleigh. While these characters were more caricatures in the first book, in this follow-up they each came into their own, all navigating their own future paths and working towards their own goals in ways that didn’t just serve to support Paige. Between the petty arguments, genuine concerns for each other, drunken secret spilling, break-ups, make-ups and more, this friendship group is a prime example of the joys of female friendship, and seeing these young women support each other through everything is reason enough alone to pick up this book.

Compared to The Start of Me and You, this is a slower, much more grounded read – but that’s certainly no bad thing. Across every one of its pages, The Map from Here to There offers an uplifting snapshot of a very specific time of life, and it embraces all of the confusion and worry of that time right alongside the joy, hope and optimism for the future too. This may be a chapter of Paige’s story that we didn’t know we needed to hear, but Lord balances the very real feelings of nostalgia, future trepidation and nervous excitement at play here with ease, making it a book that’s very worth reading – and one that will hopefully resonate with many readers both now and in many years to come.