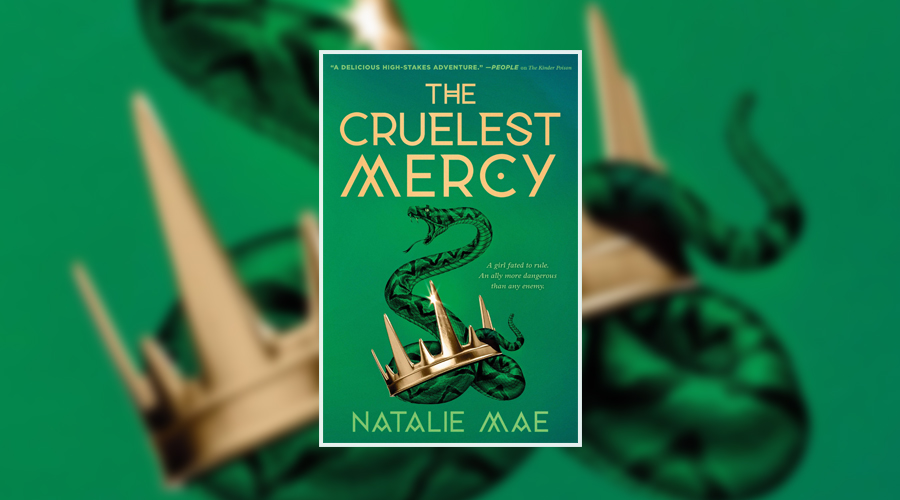 Second books, especially within a series, can often be tricky things, and for every second book that successfully drives the narrative forward with the same amount of intrigue and adventure as the first, you’ll inevitably be able to point to more that feel like the story itself has gotten a little lost as the author bides time before the bigger, deadlier showdown to come.

The difference between what makes a good second book and what makes a great one can therefore often be a very fine line to traverse, but while The Cruelest Mercy sometimes feels like it could be criticised for simply being filler, Natalie Mae ultimately manages to avoid that pitfall and delivers a book that picks up all the threads left open in The Kinder Poison and weaves them into a quieter – yet no less powerful – story that still holds all of the same tension, magic and high-stakes decision-making that made the first book such a fun and exciting read.

A month on from the events of The Kinder Poison, Zahru, having survived the Crossing, has determinedly sworn off any more adventures. With Princess Sakira and Prince Kasta believed to have died during the ancient tradition that almost cost Zahru her own life, Crown Prince Jet is preparing for his coronation as Mestrah while navigating the looming threat of war against Orkena, and Zahru is happy to simply step back into the background and figure out what the future holds for her and Jet.

But then Prince Kasta returns and declares that he is the true winner of the Crossing and the true heir to the throne, with the mark of the gods on his chest to prove it – and he’s not the only one, as Zahru reveals that she bears the same mark, giving her equal claim to the throne. Determined not to let Orkena fall into the hands of the cruel, merciless prince, Zahru is willing to do whatever it takes to keep Kasta from taking the throne – even if it means becoming just as ruthless as Kasta himself.

“When I set the brutal piece atop my head, I hardly recognise myself. I look predatory and cold, a blade in the shape of a girl.”

If The Kinder Poison was all action, world-building and set-up, then The Cruelest Mercy is most definitely devoted to the fallout, and it soon becomes clear that, this time around, the story is taking a much more subtle, introspective approach. Rather than big action sequences and huge battle scenes, this book instead explores the new world order following the events of the Crossing and moves all the pieces on the board into their new positions, including Zahru and her friends and allies. As Zahru is forced to get to grips with her new status as dōmmel, including developing her new magic abilities and getting a crash course in years of political history, she’s also struggling with her constant fear that Kasta has become even more of a monster than they first thought.

It’ll come as no surprise, then, to hear Zahru becomes increasingly paranoid and fearful over the course of these 300-odd pages, which also ensures that the tension in this novel never lets up, even while it feels like not a lot of plot is happening. More than that, it also feels like a completely understandable narrative progression, especially considering the sheer trauma of what Zahru went through in The Kinder Poison, and the fact that the first book’s epilogue already confirmed to readers that Kasta has changed, just as Zahru suspects he has.

With Zahru pulled further and further away from her friends and family too, she’s left with her own thoughts more often than not throughout this novel, but that isolation also ensures that the readers are with Zahru every step of the way – through her fears, her frustrations and beyond. In fact, every decision that Zahru makes, both good and bad, ends up seeming completely justifiable, with readers knowing exactly where the motivations and reasoning behind then come from, even as her actions shift further towards greyer areas.

In this sense and many more, The Cruelest Mercy feels like a bit of a risky direction to take your series, but that’s also exactly what makes it so endlessly fascinating. Throughout everything, Zahru remains a relatable lead character – one who’s funny, overtly sarcastic and has a tendency to say whatever’s on her mind and demand answers rather than think on them endlessly. It would have been nice to see a bit more of Jet, Hen, Melia and Marcus and their own reactions to Zahru’s changing position (instead, they play very peripheral roles here) but it is Zahru and Kasta’s dynamic that is the most interesting by far, and as such it’s difficult to begrudge any of the time that we spent with the two of them in this novel.

Once again, Natalie Mae has written a fantasy novel that grips and entertains its readers, even if it takes a chapter or two to successfully re-immerse yourself in this world. With its quick and easy writing style, its fascinating trio of lead characters, and plenty of secrets, threats and suspicious behaviours to keep you on the edge of your seat throughout, The Cruelest Mercy is a novel that fantasy fans will race through in no time at all – and it ends with the kind of wicked, tantalising closing chapter that will leave readers wishing for the next book to arrive as soon as possible too.

The Cruelest Mercy is published by Razorbill on 19 July 2021